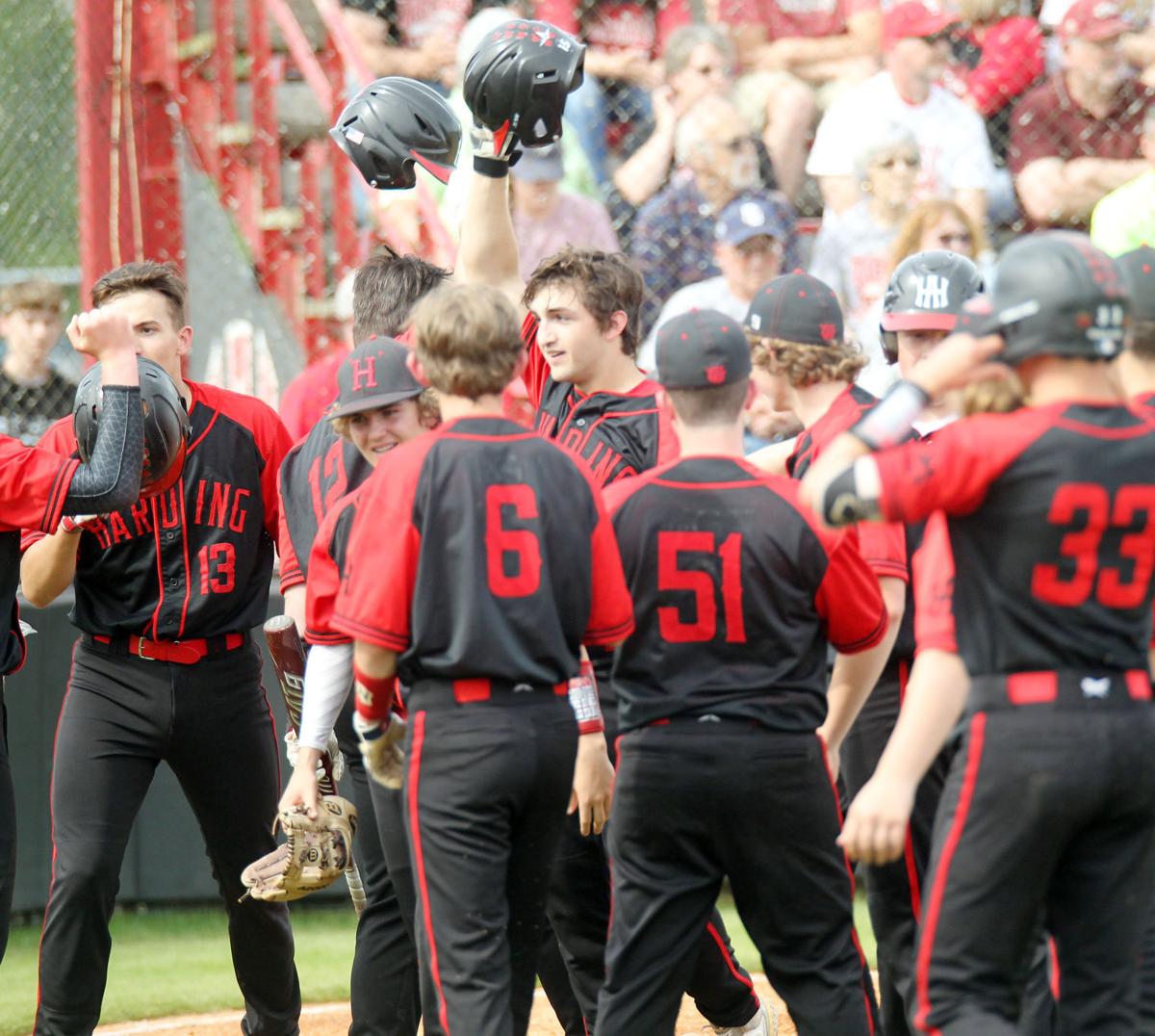 Harding Academy’s Kade Smith holds his helmet up highest after crossing home plate following a first-inning home run in the finals of the 3A-2 district tournament against Pangburn on Friday. 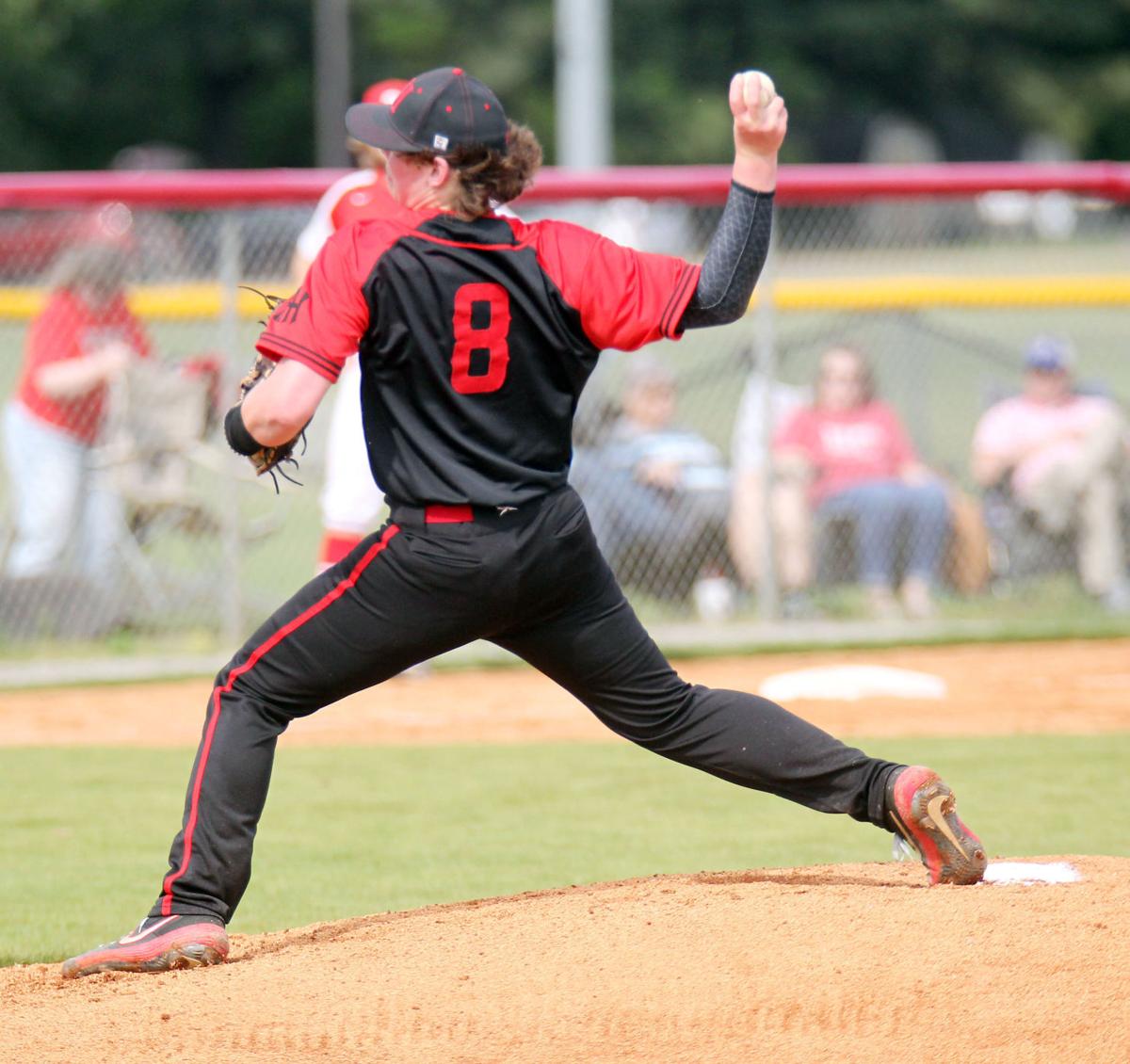 Harding Academy’s Kade Smith holds his helmet up highest after crossing home plate following a first-inning home run in the finals of the 3A-2 district tournament against Pangburn on Friday.

It was a picture of domination by Harding Academy on Friday night at Wiggins Field against Pangburn for the finals of the 3A-2 district tournament.

Harding Academy scored seven runs in the second inning to break open the game and when the dust settled back down on the infield, the Wildcats defeated the Tigers 14-0, and kept the winning streak alive at 13 games and added another trophy to the collection.

Harding Academy starting pitcher Levi Lang worked the complete game only giving up one hit in the fourth inning, when Tigers center fielder Braxton Butler found the only mistake Lang threw against the Tigers. The ball got in the hole at second and first for a single.

The hit didn’t not bother Lang, he went on to strike out 10 Tigers, walked one but the most important fact – he did not hit a batter.

Harding Academy baseball coach Alex Smith was able to let out a little sigh escape into the evening air inside Wiggins Field at the end of the game. He joined his players and his coaching staff in the celebration. He said after the game that he was proud of the effort by his team, especially the starting pitching, the improvement of the defense and the approach at the plate by the Wildcats’ hitters.

The last time that this pitching staff gave up any runs was April 20, against Rose Bud but the Wildcats were able to get the 7-3, victory against the Ramblers.

“Our pitching was so dynamite this week, I don’t know the full stats on it but it was one guy a game. I actually got two kids that have to stay late and throw some more to get ready for next week,” Smith said. “Our starting pitchers were just great. That is all you can hope for is that your starting pitcher can give you a chance.”

Leading the charge at the plate, third baseman Kade Smith, who was able to make good contact with a fastball and deposit the over the left center field fence for a two run home run in the first inning.

The home run by Smith brought Pangburn coach Austin Allen out to the mound and he replaced the Tigers starting pitcher C. Ramsey, after giving up three runs and working just 1/3 of an inning before being replaced by Trevor Evans.

Allen’s pitching staff could not find the solution in facing the Wildcats first baseman Eli Wallis, he came to plate three times and three times he was hit by the pitch.

Even the coziness of Wiggins Field supplied a run producing double in the third inning.

Harding Academy second baseman Jadyn Wilhite hit a pitch from Evans that looked like it was going to be a routine ground ball but the spin of the baseball created bounce off the lip of the infield and the base path and stayed in flight long enough over the bag at third base – a fair ball.

When the Tigers left fielder Tanner Gaiyan recovered the ball, Wilhite was standing at second base with a double and two RBIs.

Harding Academy freshman outfielder Kyler Hoover, added excitement in the fourth inning when he found a 3-2 fastball and went the opposite way into right field by the time the ball made back into the infield, Hoover was standing on third base with his first triple of the season.

After the game, Allen said that the Tigers are a tough team and that this team has grit but sometimes because this is baseball and sometimes you just get beat.

“I got this group handed to me January 4, they have been through two coaches this year and in four years, they have had three coaches,” Allen said. “On the back of our shirts we have the word grit and define this group. They are not the most talented but hard-nosed. It was one sided today and we got a butt kicking. My daddy taught me that everybody needs their butt kicked every once in a while in life but it is how you respond after you get your butt kicked.”

The season is not over for Pangburn as they will make the road trip to the baseball field at Clinton High School to play in the Regional Tournament as the No. 2 team from the 3A-2 conference.

“As long as these boys keep their heads up high anything can happen,” Allen said. “That is baseball!”

The trophy ceremony was short with photo opportunities, there were proud players, proud parents and a proud coaching staff.

Smith said that the Wildcats he will take a little time and enjoy the win but it is right back to work for the Wildcats.

Harding Academy will open the regional Tournament at Clinton High School against the fourth place team of the 3A-3 conference. The tournament is scheduled to begin at 10 a.m. Thursday