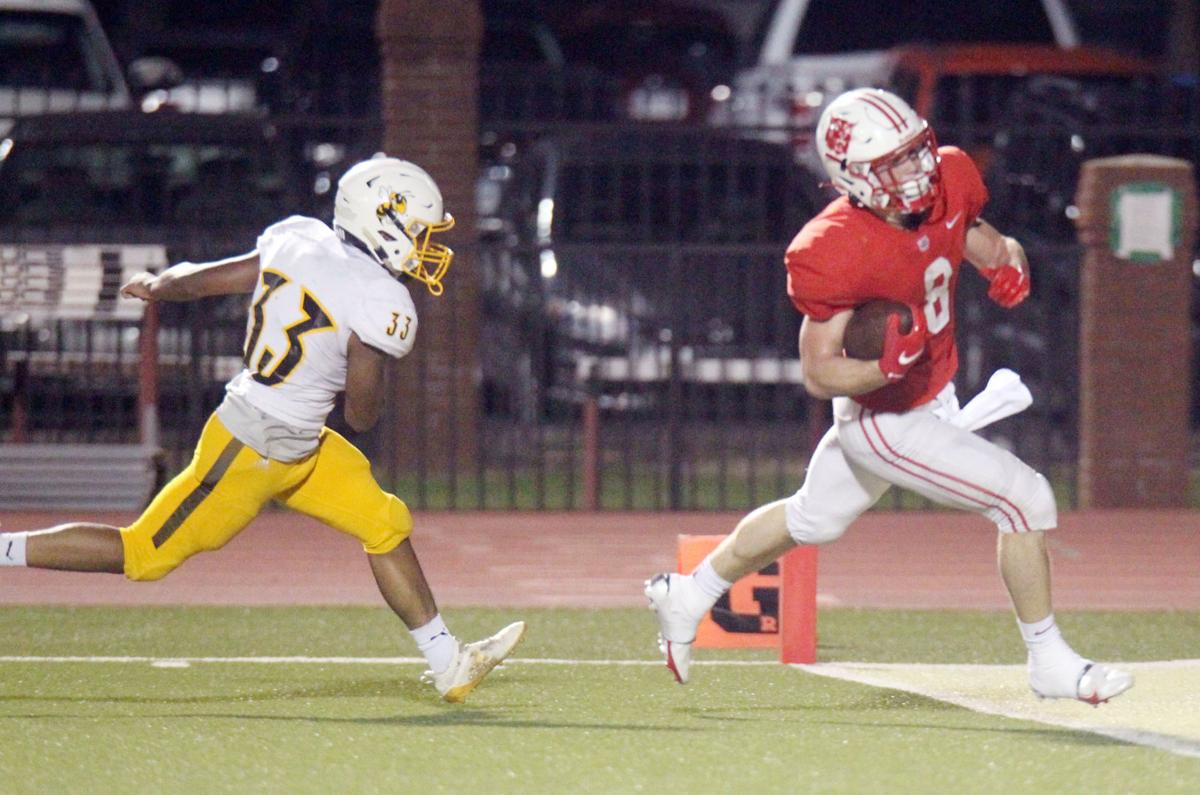 Harding Academy’s Andrew Miller crosses the goal line for a touchdown in the second quarter of the Wildcats’ win over Camden Harmony Grove on Friday at First Security Stadium. 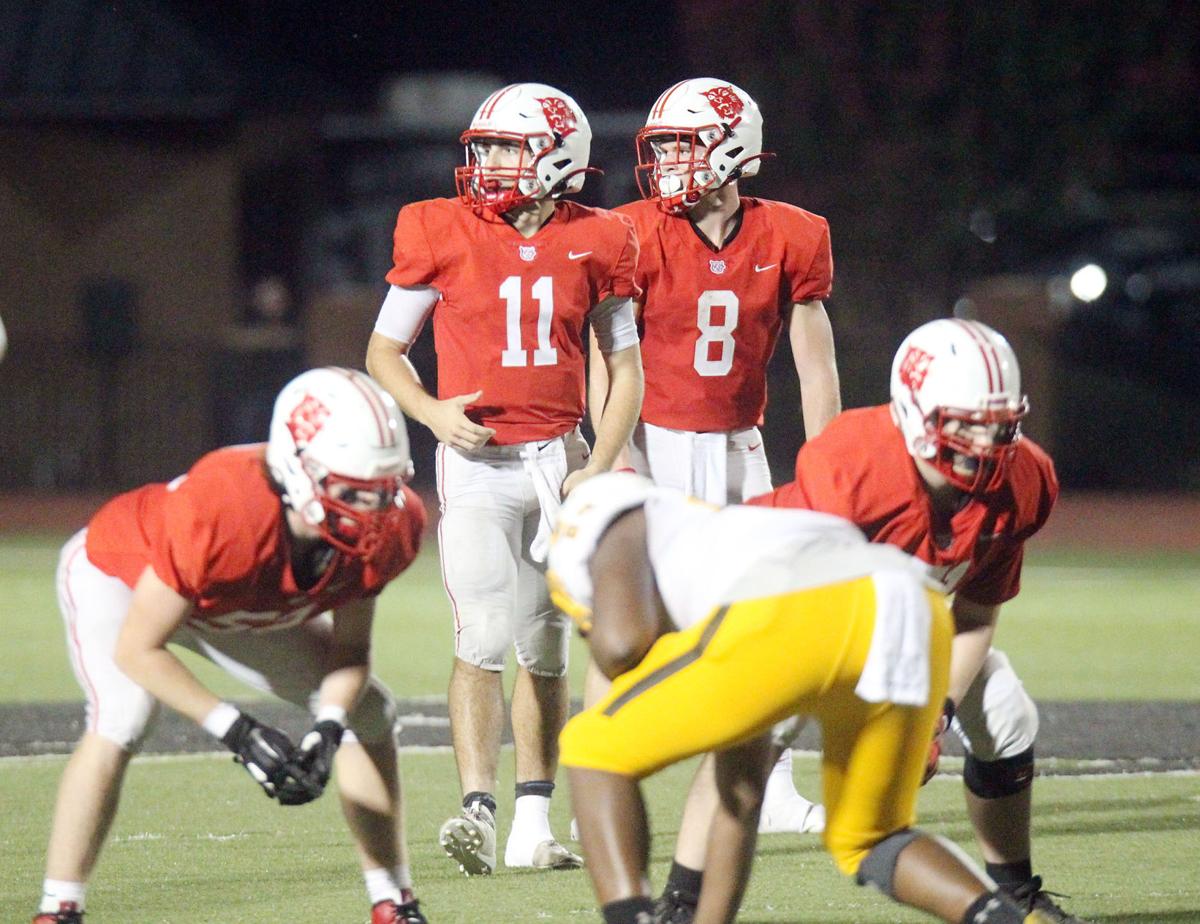 Harding Academy’s Kade Smith and Andrew Miller look to the sideline for a play call during the Wildcats’ win over Camden Harmony Grove on Friday. 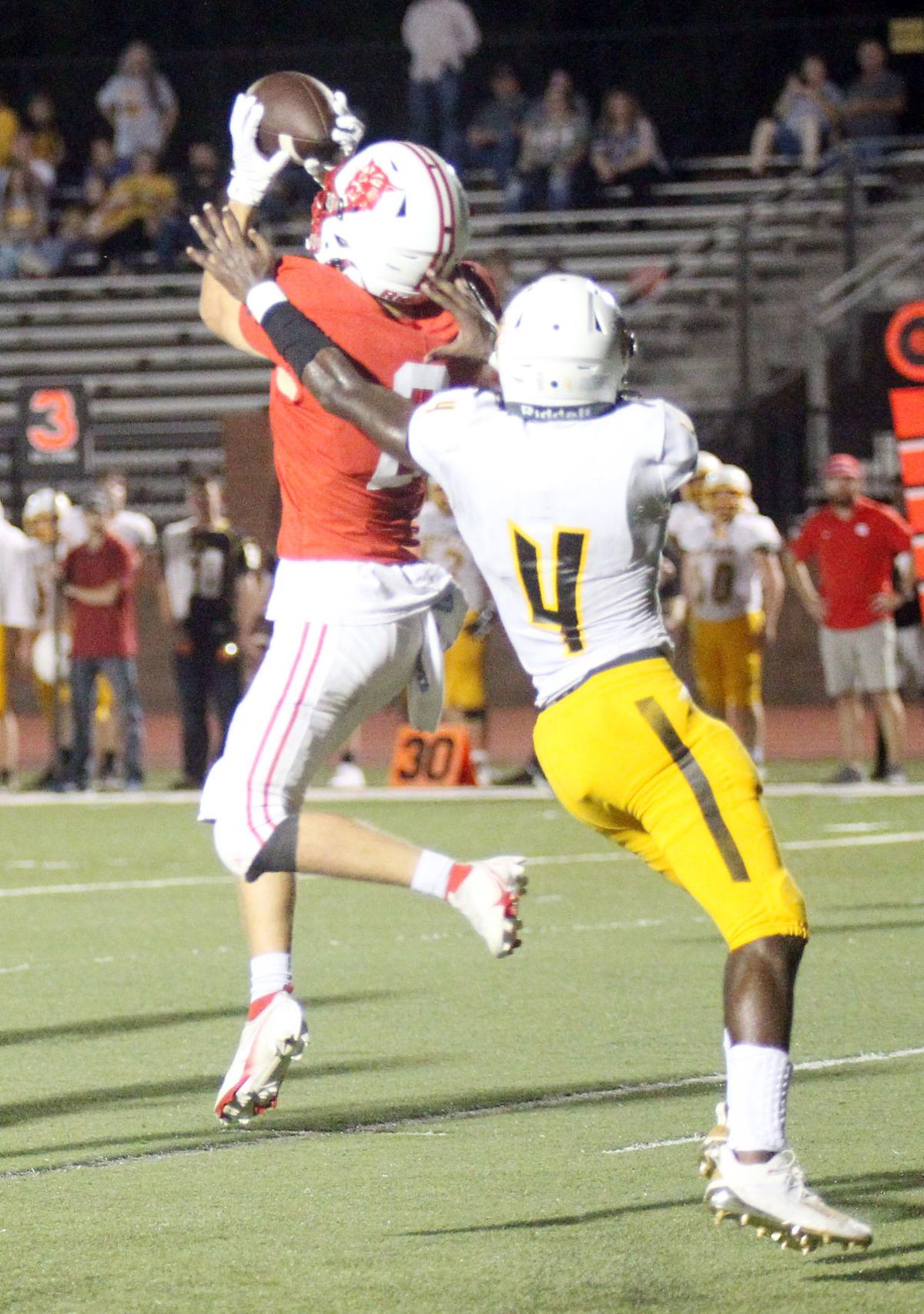 Harding Academy’s Jackson Fox catches a pass from Kade Smith during the second quarter of the Wildcats’ win over Camden Harmony Grove on Friday at First Security Stadium.

Harding Academy’s Andrew Miller crosses the goal line for a touchdown in the second quarter of the Wildcats’ win over Camden Harmony Grove on Friday at First Security Stadium.

Harding Academy’s Kade Smith and Andrew Miller look to the sideline for a play call during the Wildcats’ win over Camden Harmony Grove on Friday.

Harding Academy’s Jackson Fox catches a pass from Kade Smith during the second quarter of the Wildcats’ win over Camden Harmony Grove on Friday at First Security Stadium.

For the first time this football season, Harding Academy would enjoy the feeling of being at home, inside First Security Stadium.

Harding Academy coach Neil Evans said last week that it would be nice to be able to stay at home and play in front of friends and family and to enjoy some home cooking.

It took a little time for the Wildcats to get used to their new surroundings, but once they got acclimated to being at home. Harding Academy unleashed their offense and scored 42 points in the second half and defeated Camden Harmony Grove 59-18 and for the Wildcats it was their third win of the season.

Evans said that the Harmony Grove had an intense defensive game plan against the Wildcats, they would disguise the defense until the Wildcats’ offense was set. The miscues with ball security and uncharacteristic penalties called on the Wildcats slowed down the offense for Harding Academy and it made getting adjusted to being at home a little longer.

“They had a really good game plan,” Evans said. “They would check the defensive line. Every time we checked the sideline they would show a different look.”

Harding Academy quarterback Kade Smith led the Wildcats offense, but he was given a chance to overcome some adversity on the field and to show his ability at being a leader. He kept his cool and he kept attacking the Hornets defense.

Smith led the Wildcats to a total of 451 yards of offense production. The rushing game was led by Andrew Miller. He ran 13 times for 130 yards and scored three touchdowns.

Smith threw the ball 33 times and completed 25 passes for a total of 299 yards. He did not throw an interception, but he threw three touchdown passes, including a scoring throw for 76-yards to Jackson Fox.

“I thought that he did really well and he hurt his ankle early in the game. So, he was limited with his ability to run, we survived there for a little bit until his ankle healed,” Evans said about Smith. “We had to throw the ball when we needed to run – especially with him.”

Harding Academy opened the scoring in the first quarter with a 41-yard field goal by Kyle Ferrie. During the 45-yard drive, the Wildcats had two more offensive penalties to overcome, but Smith showed his leadership skills. Smith stayed with and kept executing the offensive game plan, settling for the field goal.

Harmony Grove quarterback Caleb Johnson ran to his left, the Wildcats were closing in but Johnson planted his right foot into the turf and was able to get the angle off to the right and he scrambled 11 yards for the touchdown with just 0.2 seconds remaining in the first half. Harmony Grove went into halftime trialling the Wildcats 17-6.

Camden Harmony Grove coach Ernie Horstkamp said after the game he believed that the touchdown scored at the end of the first half would help his team build confidence and momentum for the second half.

Horstkamp said that Johnson has the ability to stretch out plays and extend his offense’s to control of the clock and to keep the ball.

“He has got a knack in keeping the plays alive,” Horstkamp said. “He has good instincts for people being around him. He obviously has a lot of athletic ability. He made some people miss him when he scored that touchdown right before halftime. I thought that it was going to get us right back into the ball game.”

Winning the coin toss before the game Harmony Grove elected to defer the choice of getting the football to start the second half of the game.

Harding Academy defense forced the Hornets into a fourth and 17 yards to go for a first down and the play of the game with special team defensive lineman Sam Butterfield.

The ball resting on the 13-yard line, the Hornets in punt formation, seeing the gap open up, Butterfield came through the line. He charged for the spot, he then jumped and spiked the football onto the ground. He recovered the football in the end zone for a touchdown.

“We came into halftime and we needed to make some adjustments,” Evans said. “Sam blocked the punt and recovery down there for a touchdown really set the tone deep in their territory.”

Harding Academy scored 21 points in the third quarter before the five minutes mark of the second half had expired.

The defense for the Wildcats gave up a total of 456 yard to the Hornets offense but forced the Hornets into turning the ball over three times with two interceptions that included a pick-six by junior defensive back Kennedy Rush that traveled 26 yards into the end zone.

It will a quick visit at First Security Stadium for Harding Academy. This week the Wildcats will be on the road and cross the Mississippi River. Harding Academy will be visiting Eads, Tennessee, on Friday night and will be facing undefeated Briarcrest Christian. Kickoff is 7 p.m.