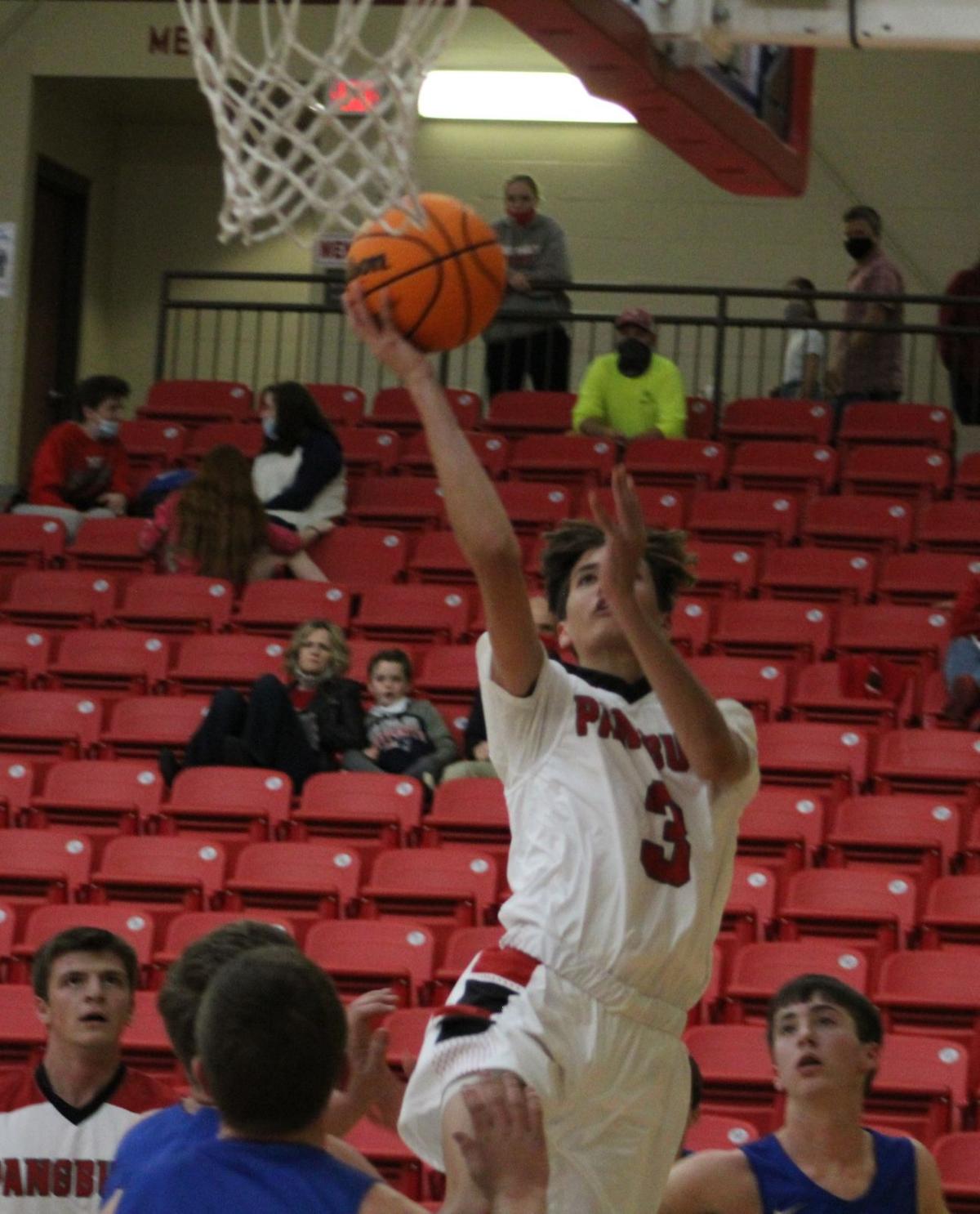 Pangburn junior Jordan Ramsey goes up for a layup against Southside Bee Branch. Ramsey scored 20 points, including 16 in the first half in the host Tigers' victory. 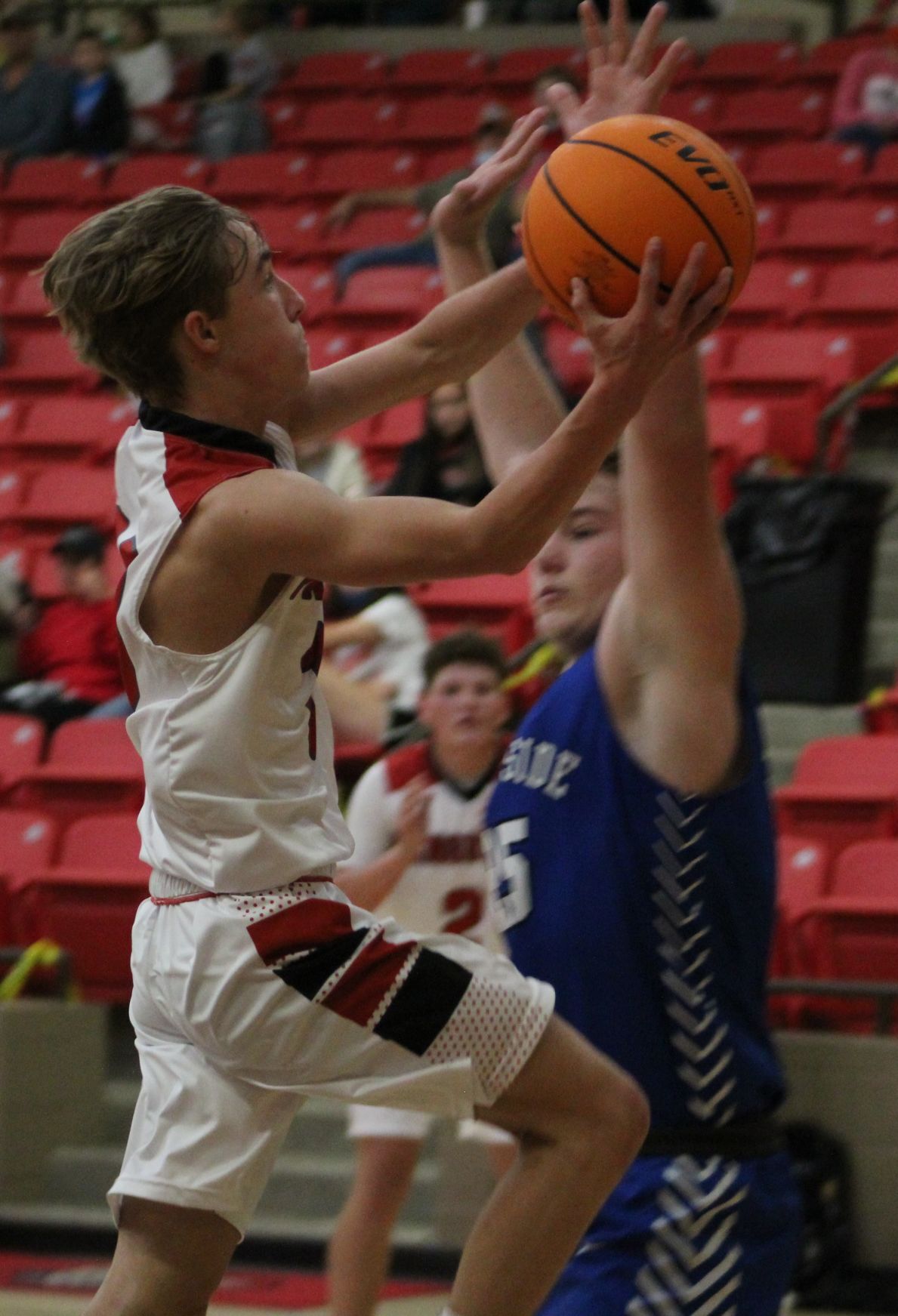 Pangburn junior Braxton Butler drives for a shot against Southside Bee Branch on Thursday. Butler scored seven points, all in the first half, in the host Tigers’ victory.

Pangburn junior Jordan Ramsey goes up for a layup against Southside Bee Branch. Ramsey scored 20 points, including 16 in the first half in the host Tigers' victory.

Pangburn junior Braxton Butler drives for a shot against Southside Bee Branch on Thursday. Butler scored seven points, all in the first half, in the host Tigers’ victory.

Defense and assists were the key to send the Pangburn Tigers and their fans into Thanksgiving break happy with a 77-60 win over Southside Bee Branch in Pangburn on Thursday night.

The Tigers came out with energy in the early minutes of the first quarter. Southside Bee Branch was able to get two early field goals and then the defense for Pangburn caused turnovers with picked off passes and active hands that led to eight unanswered points.

With the early 11-4 lead, Pangburn started to relax just a little and the Hornets came fighting back and made it a two point game at one point at 17-15.

Pangburn was able to finish the quarter positively and held the lead at the end of the first quarter 23-15.

Pangburn’s defense again was big in the early part of the second quarter, causing four consecutive turnovers that led to another eight quick Tiger points.

“We had a really good game plan just to up the pace and keep the tempo up,” junior Braxton Butler said. “I think we really followed through on that. The main goal was to just speed everybody up and we could get our way.”

Southside Bee Branch called a timeout less than three minutes into the quarter. In a blink, the Pangburn lead had ballooned to 31-15.

Both teams started to really pick up the offense as the first half started to wind down.

The three-ball was falling for both teams and both teams were able to find open shots near the basket.

The difference in the second quarter was the defense of the Tigers. The turnovers and the active hands allowed them to make more shots and better shots for the Hornets.

At the half despite both teams offenses playing well, Pangburn held a 55-32 lead.

Junior Joseph Ramsey and senior Luke Rolland led the team at the half with 16 points each. Ramsey, Rolland and Butler had multiple assists in the first half.

“We like our team a lot,” Pangburn head coach Ben Jones said. “We believe in our team. Everybody understands their role, whatever we are doing, whatever the game plan is, because obviously was different from Tuesday to today.

“Whatever the game plan is the kids buy into it. If people only think that we only have Luke that can score then we will win a lot of games because we have a lot of weapons.”

As the second half got under way, the game started to slow down.

There was not as much scoring as there was in the first half and Southside Bee Branch started to slowly chip away at the Pangburn lead.

Pangburn was able to find its offense near the end of the third quarter and put the game out of reach for the Hornets.

Jones put in his subs for most of the fourth quarter and saw production from them.

The play of the fourth quarter in respect to bench reaction came from sophomore Tim Miller who spun by a defender in the post and scored a basket while drawing the foul with three minutes left in the game.

“It feels great,” Miller said. “I don’t really get to go in that much but when I do, I try to put on a show for my teammates.”