Sign Up
Log In
Purchase a Subscription
You have permission to edit this article.
Edit
Home
News
Sports
Business
Community
Announcements
Obituaries
Opinion
Multimedia
Classifieds
Share This
1 of 3 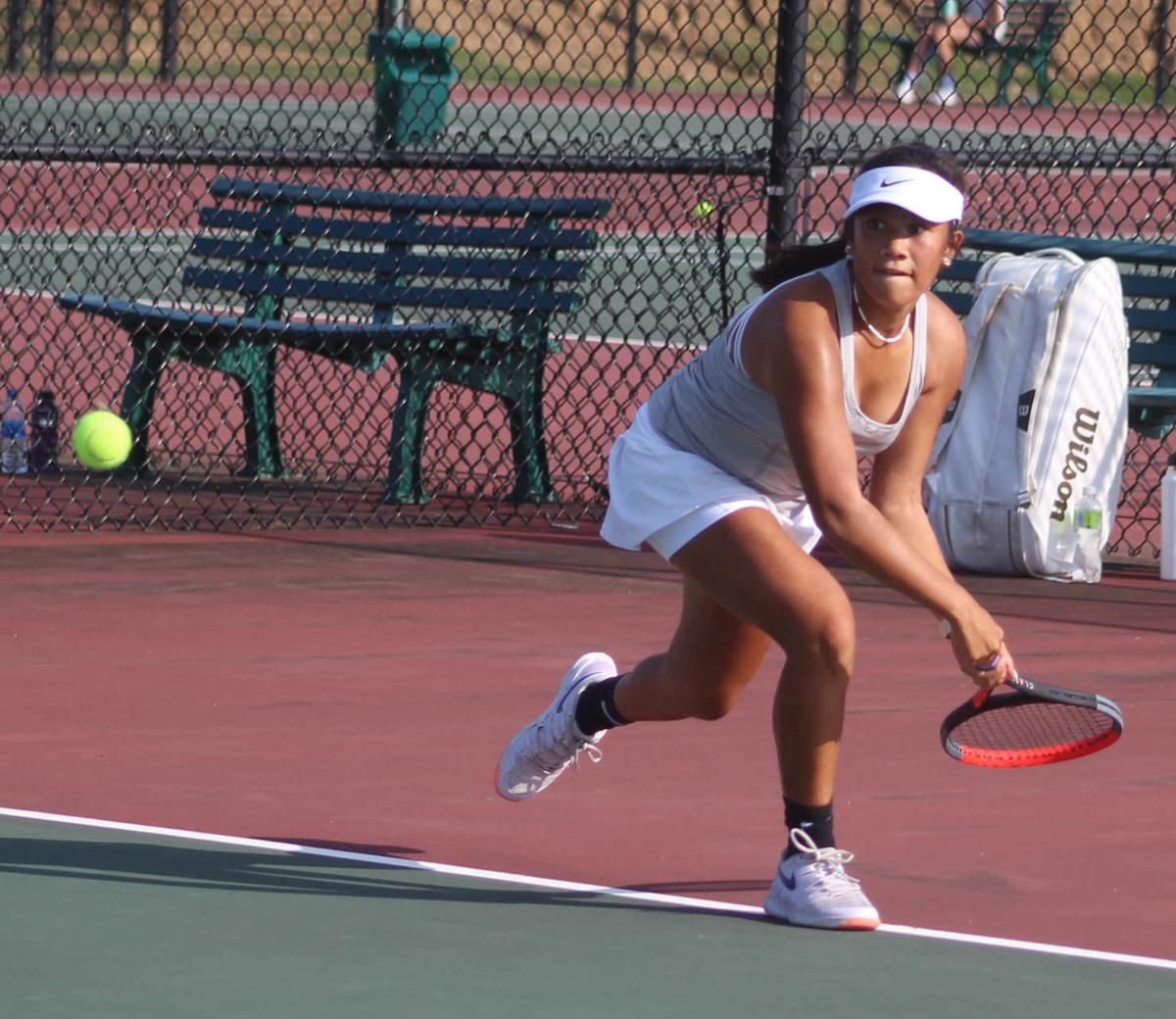 Haley Tancinco chases down a shot in her and Payton Graham's 6-3 doubles victory over Wynne's Jace Carns and Hope Blackman in a nonconference match Tuesday at the Searcy High School tennis courts. 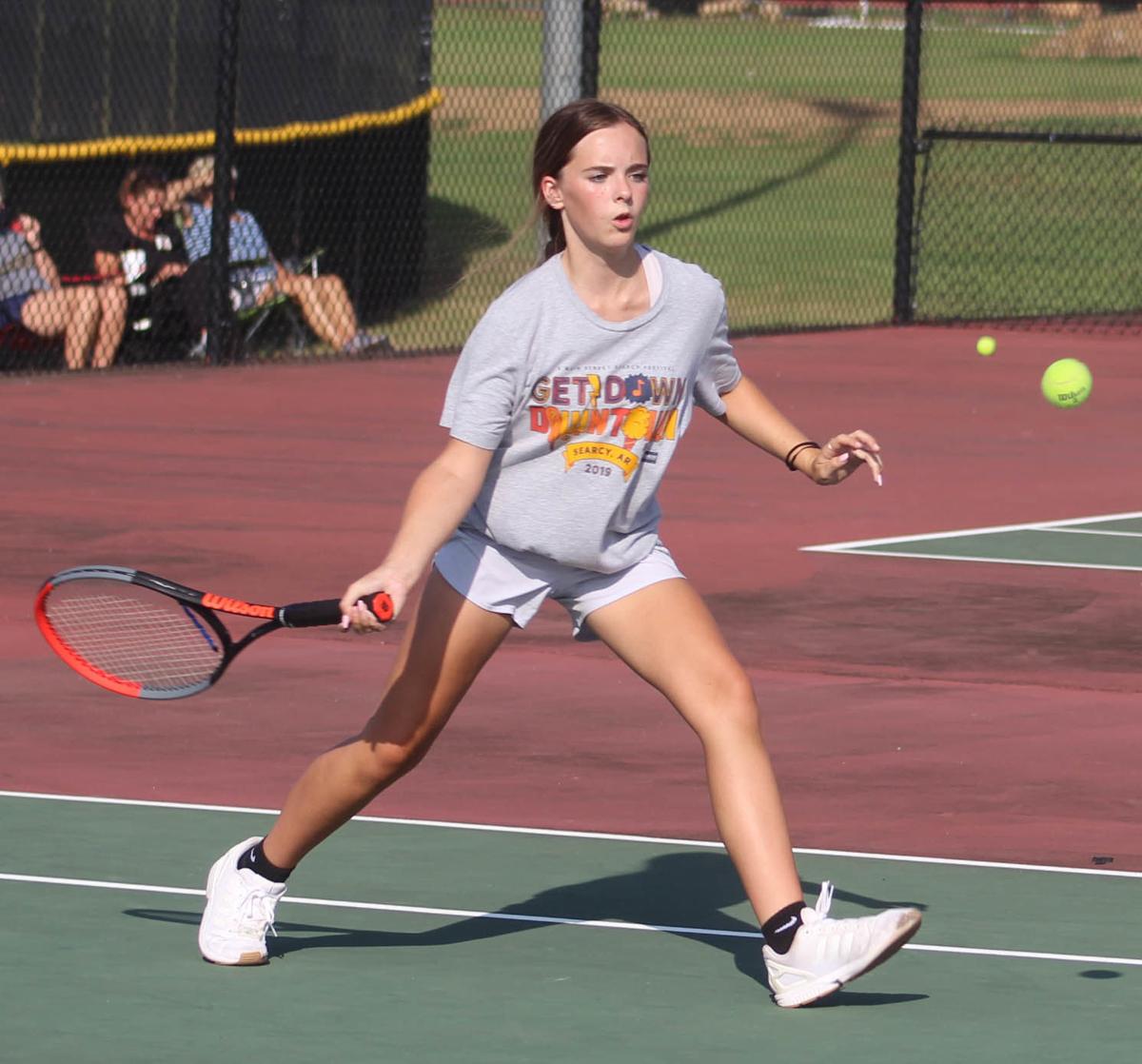 Payton Graham readies for a return in the doubles victory Tuesday for her and Haley Tancinco.

Haley Tancinco chases down a shot in her and Payton Graham's 6-3 doubles victory over Wynne's Jace Carns and Hope Blackman in a nonconference match Tuesday at the Searcy High School tennis courts.

Payton Graham readies for a return in the doubles victory Tuesday for her and Haley Tancinco.

Payton Graham and Haley Tancinco were No. 1 Tuesday, but they had to overcome some service issues in order to live up to the billing.

With Searcy coach Miles “Doc” Watson choosing to play mostly junior varsity in a nonconference match against Wynne’s varsity, Tancinco and Graham were called on to play No. 1 doubles. They stepped up in the role with a 6-3 victory over Jaci Carns and Hope Blackman.

It wasn’t as easy as it seemed like it was going to be after Graham/Tancinco rolled to a 2-0 lead, surrendering only one point in the first game before Graham finished it with a kill at the net and then not giving up a point on Graham’s serve, which included two aces.

However, Graham and Tancinco couldn’t overcome several misses on returns, falling after taking Blackman’s serve to deuce, and then had their serve. Tancinco, who hits her second serve as hard as some hit their first, double-faulted to open her serve, but followed it with an ace down the middle to make it 15-15. It went back and forth from there to deuce before a kill by Blackman at the net tied the match at 2-2.

After watching their early lead slip away, Tancinco and Graham roared back in front with a vengeance, with Tancinco driving her return on a second serve down the line and dropping a shot into the corner after a volley and Graham delivering a deep shot that the Wynne duo couldn’t return to make it 40-15 before an unforced error put Graham and Tancinco up 3-2.

It wasn’t quite as easy on Graham’s next serve even though two kills at the net by Tancinco and a wide return by Blackman gave the Searcy duo a 40-15 lead. A lob by Carns and double fault by Graham evened things up before Graham hit a second-serve winner to make it 4-2.

It looked like the match might be over soon because in the seventh game as Tancinco and Graham took turns hitting hard returns off Blackman’s serve, not giving up a point before Graham finished it by zipping a return down the outside for the game-winner.

Looking to close out the match, though, Tancinco opened with two double faults, then Carns nailed a winner following a volley and at 15-40, Blackman won at the net on her second try to cut the lead to 5-3. Three driving shots on returns by Tancico helped the Searcy duo only give up a point in the final game, though, as they wrapped up the victory.

“They’re pretty aggressive,” Watson said of Tancinco and Graham, “so it’s just if they’re on point.”

The Lady Lions also got a 6-1 victory by Kristen Tranum over Zoe Colvin in No. 1 singles, a 6-0 victory by Bailey Webb over Erica Faircloth and a 7-5 victory by Ellie Covington over Sydney McDaniel. The only girls singles loss was by London King, 5-7 to McDaniel.

In girls doubles, Graham and Tancinco provided the only victory in four matches although a couple went to tiebreakers. Carley Nicholson and Marlee Price fell to Carns and Blackman 6-7 (2-7), and Hope Butler/India Baker (6-7, 11-13) and Carley Grace Brown/Mia Whittington (0-6) each lost to Colvin/Faircloth,

In boys play, Jacob Borst and Easton Gill each earned a split, with Borst beating Colton Mingo 6-0 and losing to Ryan Clark 4-6 and Gill beating Clark 6-0 and losing to Mingo 6-7, 7-9. In doubles, Searcy got two victories in five matches, Canon Smith/Evans Dawkins 7-5 over Parker Ellis/Evan Patterson and Caleb Pettis/Levi Minner 6-3 over Colton Miller and Jace McDaniel.

Watson said he was pleased overall with what he saw from his team Tuesday.

“My young ones were getting the opportunity to play up and play seeded matches, most of them,” he said.

The varsity was out in full force the previous day in a home conference match against Batesville. For both the boys and girls team, it was a good day in doubles, but a tough one in singles.

“I would say in the conference there’s some really strong singles players that have been in the conference a couple of years,” Watson said. “But we’re competing. On the girls side, we just came up short in most of them.”

In girls doubles, Graham and Tancinco had the only loss for the Lady Lions, falling 4-6, but they bounced back for a 7-6 (7-4) victory. Alyssa Day and Tranum won both of their matches 6-1. Nicholson/Price added a 6-3 victory and Webb/Covington won 7-5 to give Searcy the 6-4 team victory.

Sawyer Treadway and Isaac Covington each had a bad day in boys singles, losing twice each 0-6 to Thomas Morgan and Wes Lange. However, the Lions swept six doubles matches for the overall victory.