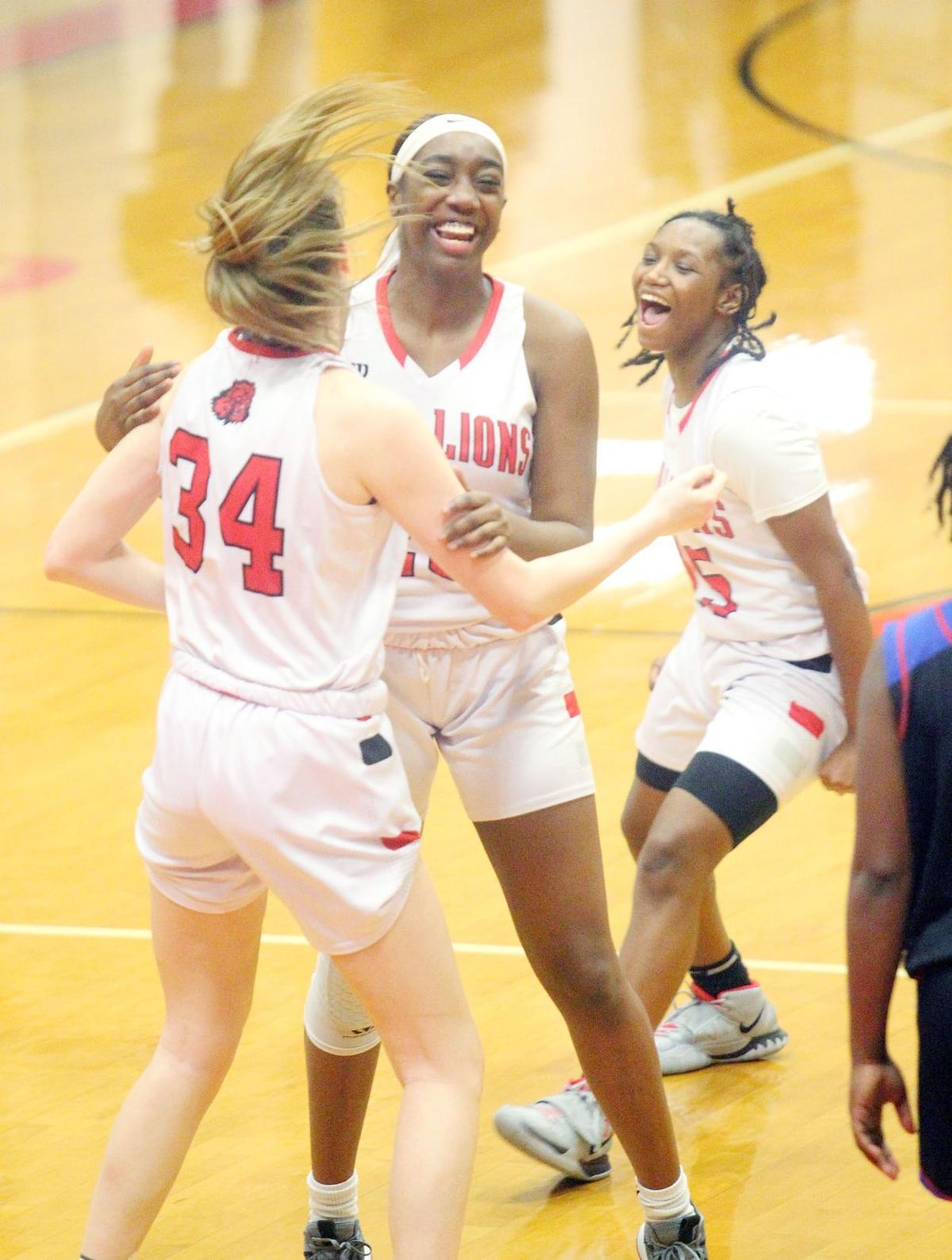 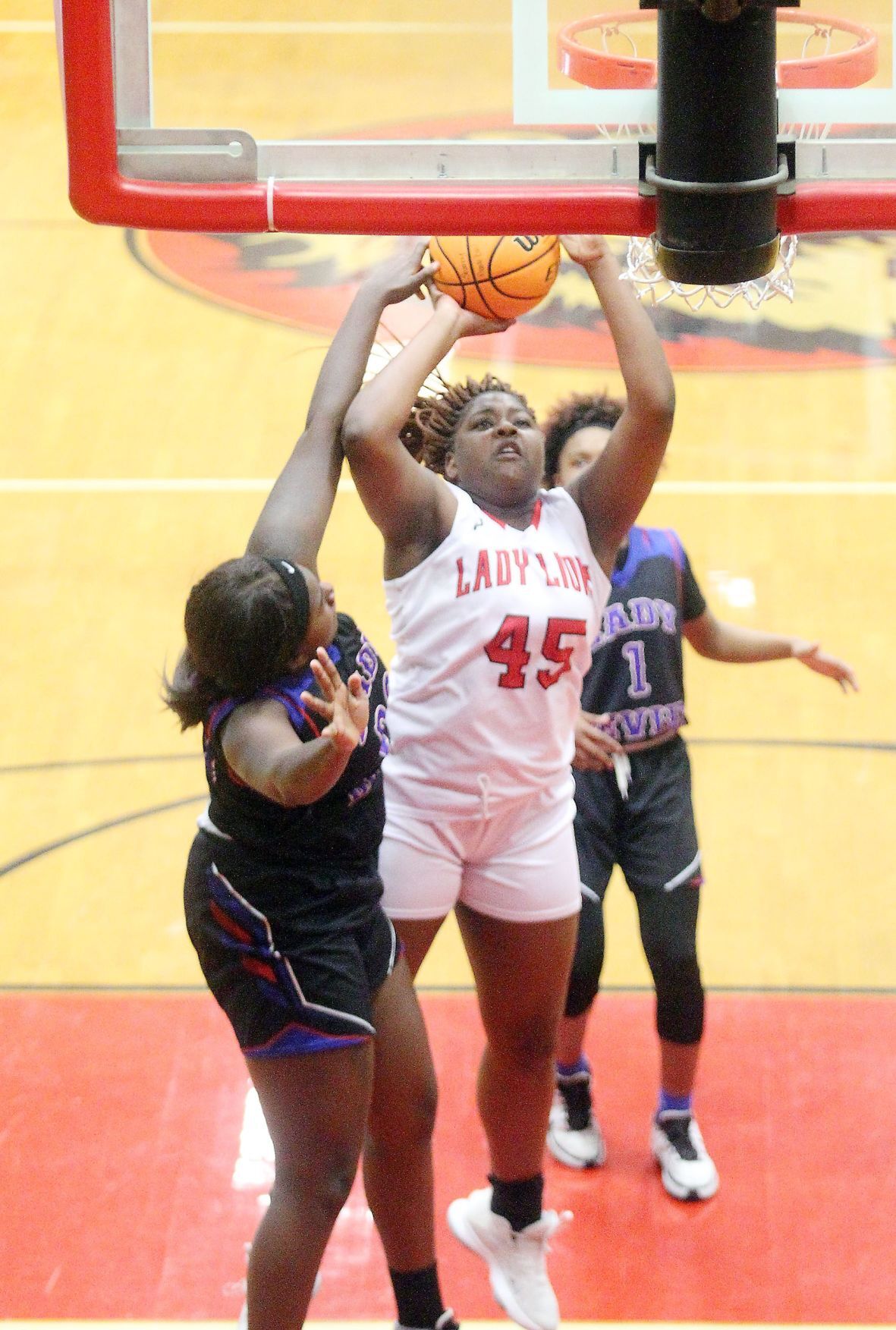 Searcy’s Ashley Brown is fouled by West Memphis’ Toricka Inmon during the second half of the Lady Lions’ win over the Lady Blue Devils on Tuesday night.

Searcy’s Ashley Brown is fouled by West Memphis’ Toricka Inmon during the second half of the Lady Lions’ win over the Lady Blue Devils on Tuesday night.

A huge 18-7 comeback run in the third quarter led by Asharia Brown, who at one point scored seven straight, and what Searcy head coach Kimm Sitzmann called “the best defense we’ve played in three years” fueled the Lady Lions to a 56-54 win over the visiting West Memphis Lady Blue Devils on Tuesday night.

“I thought we played well the whole game,” Sitzmann said.

With nine seconds to go, Searcy inbounded on West Memphis’ baseline and worked through a full-court pressing defense to get in position for whatever open shot the Lady Blue Devils offered.

The ball found Kendricka Turner, who grabbed a three-point miss and put the ball in and drew a foul with two seconds to play. Though she didn’t convert the foul shot, Turner’s putback gave the Lady Lions their first win in league play.

“That’s huge,” Sitzmann said of Turner’s game-winning play. “Sophomore off the bench. It’s nice to know I’ve got some cushion, that I have something to fall back on when a starter does have foul trouble.”

Much of the game Tuesday night was about pace – both teams looked to set their own.

West Memphis started out with a 9-4 cushion before Searcy got to within three late on two consecutive productive trips, but fell down by six. Then, Brown’s drive and bucket just in front of the buzzer got Searcy to within 18-14 at the end of the quarter.

That gap didn’t last long. Turner’s bucket tied the game at 22-22 before the first two minutes of the second quarter ran off the clock.

But in the next two minutes, West Memphis started a scoring run that gave the Lady Blue Devils a double-digit cushion.

The run was stopped at 12-0 thanks to foul shots by Searcy’s Chelsea Johnson, but West Memphis went into the break with an 11-point cushion at 35-24.

“We are still in this ballgame” was part of Sitzmann’s halftime speech. “There’s still time,” Sitzmann added. “We’ve just got to quit fouling.”

It took nearly a minute and a half for either team to get on the board in the second half.

At the 6:34 mark, it was Brown's five straight that cut into West Memphis’ lead. Her baby hook from the right side got the Lady Lions to within six at the five-minute mark.

A point-blank layup 15 seconds later by Brown capped a 7-0 run, prompting West Memphis to call a timeout. Four points is where the gap stood thanks to some cold West Memphis shooting and an opportunistic Searcy offense.

Brown hit one of two from the foul line to get Searcy to within a point. Hadley’s runner with 2:26 to play in the third gave Searcy their first lead at 38-37.

Sitzmann said the defense by her Lady Lions was a “game-changer.”

“The intensity that we came out with in the third quarter blew me away,” Sitzmann said.

Down two it was Brown’s three, the first of the night for either team that sparked another Searcy run. Inside three minutes to play, the Lady Lions led 49-48.

Her second three, this time from the corner with 2:05 to play, turned a one-point deficit into a two-point lead at 52-50.

However, West Memphis hit four straight at the foul line to pull even with 50 seconds to go.