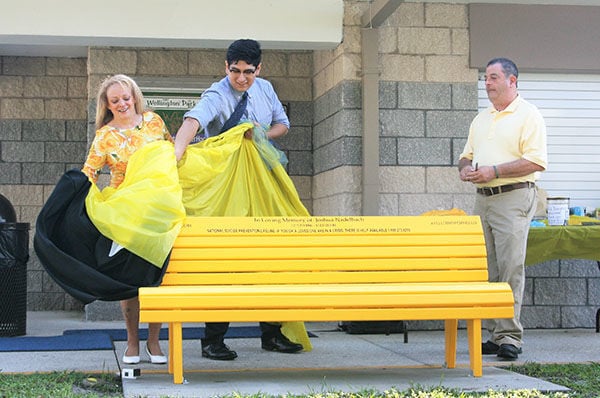 Cindy Nadelbach (left), Victor Perez and Barry Nadelbach (right) of Josh's Benches for Awareness unveil the first yellow bench for suicide awareness and prevention at Wellington’s Village Park in Florida. The Nadelbachs’ son, Josh, who was born in Searcy, died by suicide at the age of 21 in 2018. 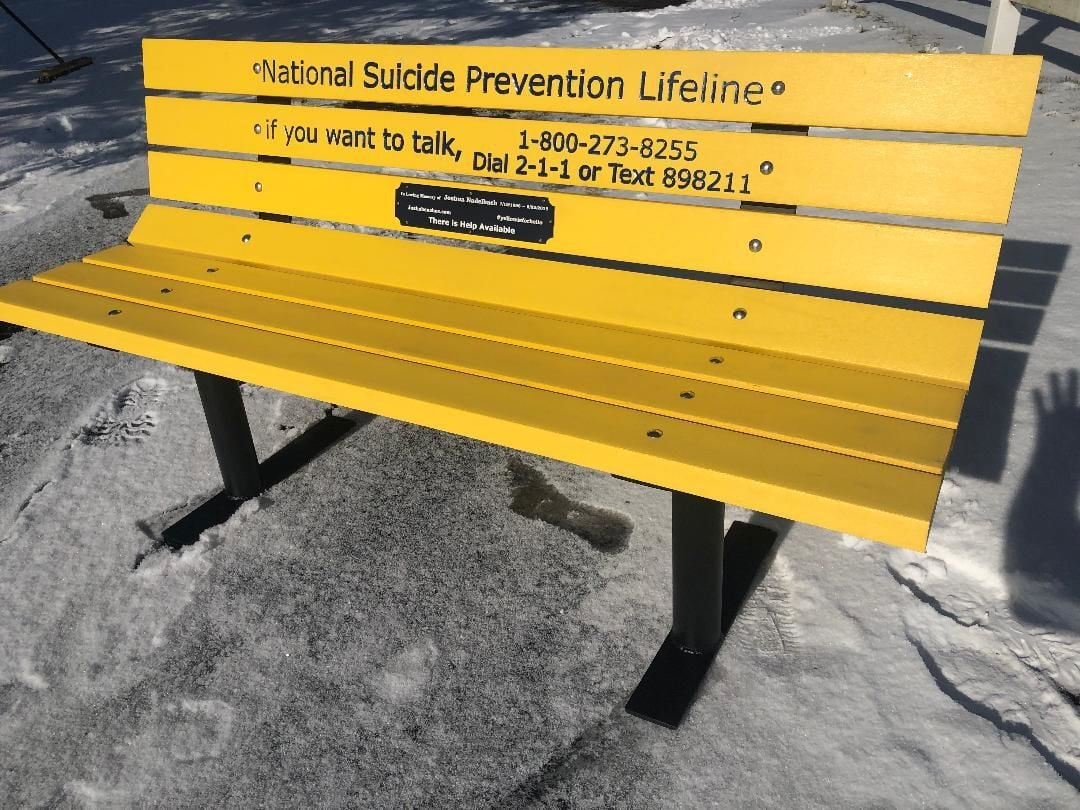 Searcy Parks and Recreation Director Mike Parsons said a yellow bench donated by Josh's Benches for Awareness will be unveiled at Berryhill Park at 4 p.m. Thursday, weather permitting. Parsons said it will be located near the sensory playground at the park.

Cindy Nadelbach (left), Victor Perez and Barry Nadelbach (right) of Josh's Benches for Awareness unveil the first yellow bench for suicide awareness and prevention at Wellington’s Village Park in Florida. The Nadelbachs’ son, Josh, who was born in Searcy, died by suicide at the age of 21 in 2018.

Searcy Parks and Recreation Director Mike Parsons said a yellow bench donated by Josh's Benches for Awareness will be unveiled at Berryhill Park at 4 p.m. Thursday, weather permitting. Parsons said it will be located near the sensory playground at the park.

UPDATE: Because of the inclement weather, the bench unveiling that was scheduled for Thursday at Berryhill Park has been canceled. It will be rescheduled

A Florida nonprofit named after a Searcy native is donating one of its yellow suicide awareness and prevention benches to Searcy Parks and Recreation to be placed at Berryhill Park.

A special ceremony is set to be held Thursday at 4 p.m., weather permitting, where the bench will be unveiled near the sensory playground.

The nonprofit called Josh's Benches for Awareness is dedicated to raising awareness on mental health issues and removing the negative stigma that surrounds the receiving of help.

Josh was born in Searcy in 1996. He died by suicide in 2018. His parents, Cindy and Barry Nadelbach, live in West Palm Beach, Fla., and run the nonprofit along with a best friend of Josh’s since the fourth grade, Victor Perez.

Cindy Nadelbach said the group has already had about 40 awareness benches installed in the United States.

“They have been placed at colleges, universities, high schools, park and recreations places, beaches ... we are just about wherever there is a public area, where there is a lot of traffic; that is where we want to be,” Nadelbach said. “With every unveiling we usually get enough donations or sponsorships so we can at least get three more awareness benches sent so we can donate them to other locations.”

The benches cost $990. Nadelbach said the organization is on Facebook at Josh's Benches for Awareness and its website is Joshsbenches.com is where people can donate.

“We are not a memorial bench,” she said. “We don’t sell benches.

“If someone calls and says, ‘I lost my loved one to suicide, I would like to sponsor a bench in memory of him,’ now what happens is that there is a plaque on the bench. On the plaque going to Searcy, that one there has ‘In loving memory of Josh Nadelbach,’ his date of birth and the date he passed – because we feel that is where our son was born. It’s kind of like sending a piece of him back. It is really important for us to do that.”

Nadelbach said she appreciates Searcy Parks and Recreation for wanting to support awareness.

“When we say support that means they are helping the community get rid of the stigma and encourage people to call that 800 number [on the bench] which is a suicide lifeline and can save the lives of those struggling in silence or in crisis,” she said. “We get a lot of phone calls afterwards [after benches are installed]. They can be anywhere and nationwide. We have had people in California that have read about us. We have a lot of stories.”

When it comes to dealing with suicide, Nadelbach said “you don’t get over it.”

“We have to find our own coping mechanisms to do. We have to find a way within ourselves to remember all the good times,” she said. “I believe something is disconnected. My son was living at home. He was a gifted child; he was planning his future. He was happy all the time, smiley. He was a computer science wiz.”

Asked if she had a message to send concerning the bench being installed at Berryhill Park, Nadelbach said “I would say the message to everybody, especially the young, that the most important thing that I have learned is it’s Ok not to be OK, but if you are feeling sad or whatever emotions you are feeling, you must talk about it.

She said suicide isn’t talked about because of the stigma.

The conversation needs to be brought to “the dining room table, the kitchen table and in every school starting in elementary school; they need to start putting in a curriculum about feelings and emotional wellness,” Nadelbach said.

Back to the bench that will be in Berryhill Park, Nadelbach said “a lot of adults go to the park; all ages, young, old, babies, infants, whoever, is going to see that awareness bench. Let me tell you, you can’t pass that bright yellow bench without stopping and looking.”

“Say that you’re that morning jogger and you are having some dark thoughts and you see this bench and people can figure it out,” she said. “When they see Josh’s bench, ‘Oh my gosh, he was only 21 years old,’ and then they go to the website, which they do go to because I got my cell phone number on that website.

“I have got phone calls from anonymous people who saw one of our benches and I know of at least three people who reached out to me in the last 2 1/2 years, and I don’t know how many I could have saved who never reached out.”

She recalled a Florida woman “who told me she was going on a morning jog and she had two young kids and supposedly she had attempted it [suicide] a few times.”

“She told me she got into a trance. Her head was just telling her one thing. She said when this trance happens, you are basically telling yourself what to do because nobody else is telling you to do this,” Nadelbach said. “This one particular day she said to herself, ‘I’m going to drop my two boys off at school and dad always picks them up after school.’ She brought a razorblade with her and she said, ‘I went for my morning jog then I got in my car and I was looking for a place to go. I didn’t know where to go.’

“She had the razorblade in the car and before she pulled away from the park to go do whatever she said she was going to do, she said she wanted to check out the website listed on the yellow bench. She goes on the website, pulling it up on her phone and said she sat in her car for about 30 to 45 minutes ‘crying my eyes out,’ and said, ‘What am I even thinking?’ By her reading that website, she promised herself to go get therapy. She saw the bench like six months after the first bench came out.”

Josh’s benches are in many states, including Alabama, Florida and Georgia.

“We have one at Purdue University in Indiana and others in New York and Illinois,” Nadelbach said. “My goal in 2020, which we had COVID, I wanted at least one bench in every state. We have a total of 40 now. We have grown. In November of 2021, it will be three years [for Joshs Benches] but we have the COVID thing.”

Addressing some place where she would like to see the benches placed, she said there have been people walking in front of trains in suicide attempts. “It is awful. I would love if every train station and bus stop would have them. In Florida, supposedly they had a few conductors quit their jobs because they saw it but couldn’t stop the train quick enough. Can you imagine living with that?”

Numbers from the Centers for Disease Control and Prevention show that there were 48,344 suicides in 2018. For each one, Nadelbach said, supposedly it affects 120 people.

“Suicide is the second-leading cause of death from 9 to 34, Every 40 seconds, someone dies by suicide nationwide,” she said.

Nadelbach said she had never seen anything posted in public about where to get help to prevent suicide before her son’s suicide.

A video on the organization’s website from the song, “Hitch A Ride” by the group Boston reminds her of her son.

“I was in the store when that song came on and it was my son’s way of telling me,” she said. “In the words it says, ‘gonna hitch a ride, head for the other side, leave it all behind,’ in other words, this is not what he wanted but this is what happened. It is his story.”

Where: Berryhill Park near sensory playground