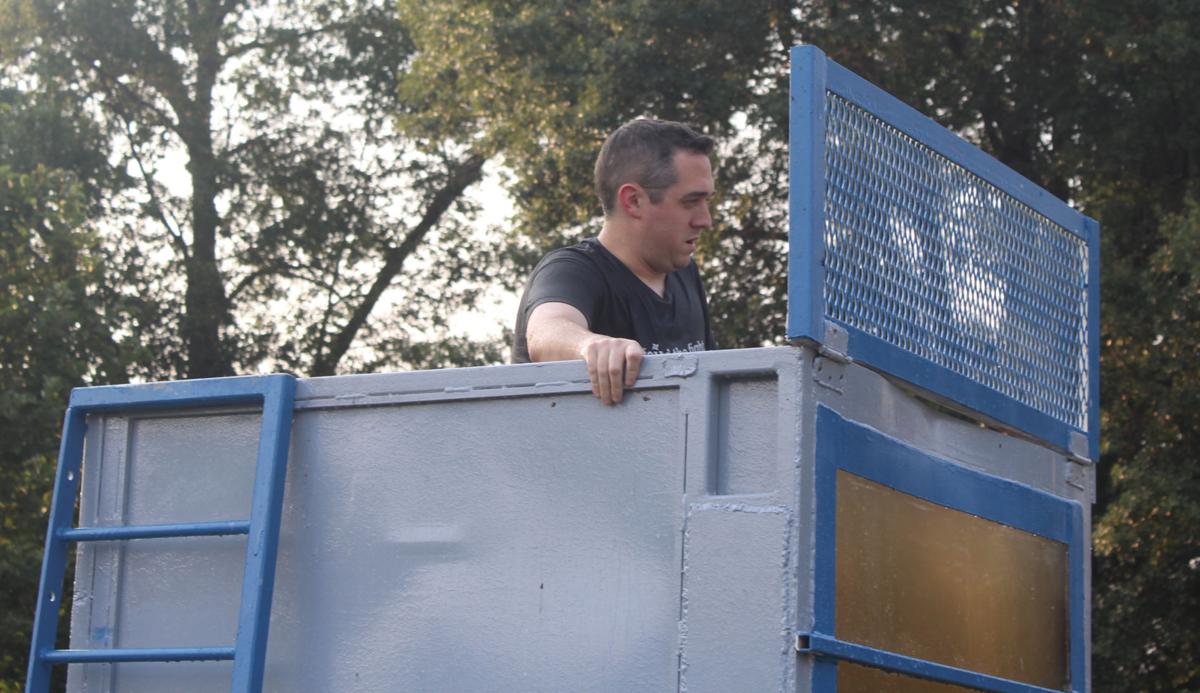 Sgt. Spenser Dangerfield, the 2021 Detective of the Year for the Searcy Police Department, participates in National Night Out, which was held last August at Spring Park. He said he got dunked while working the dunking booth. 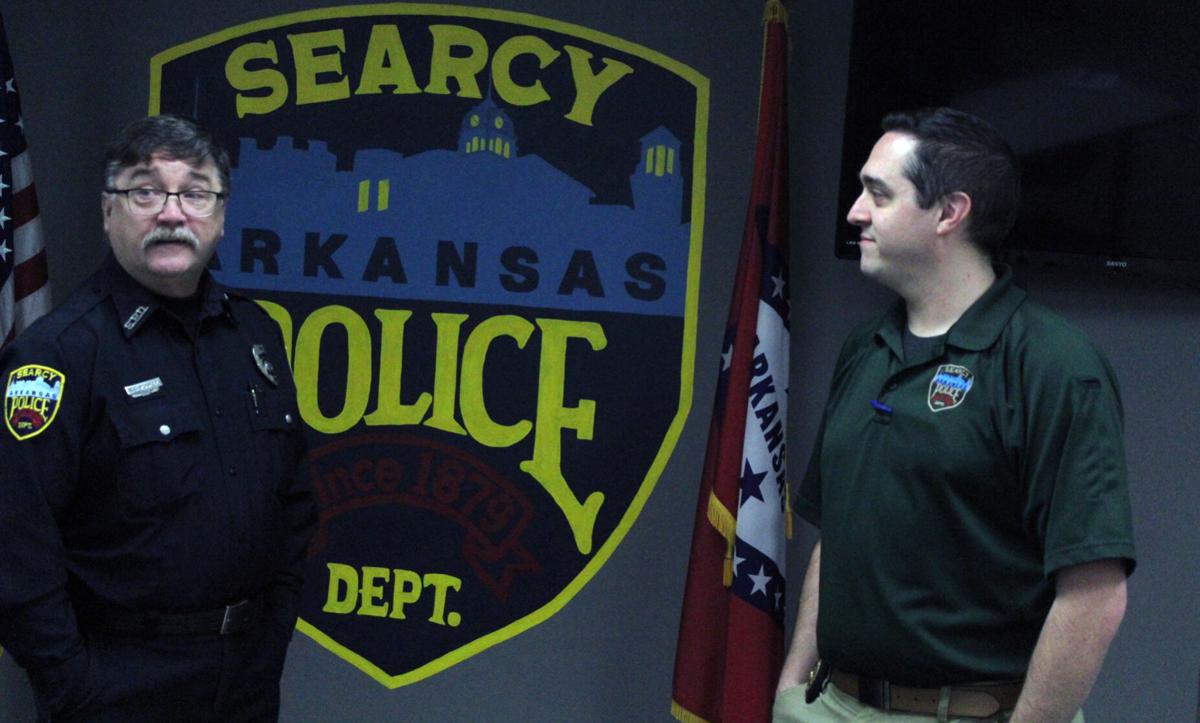 Searcy Police Department desk officer T.C. Poskey (left) and Detective of the Year Spenser Dangerfield visit at the police station. Dangerfield said Poskey’s enthusiasm for his job during a shoplifting call pointed him in the direction of police work while Dangerfield was working at a retail store. 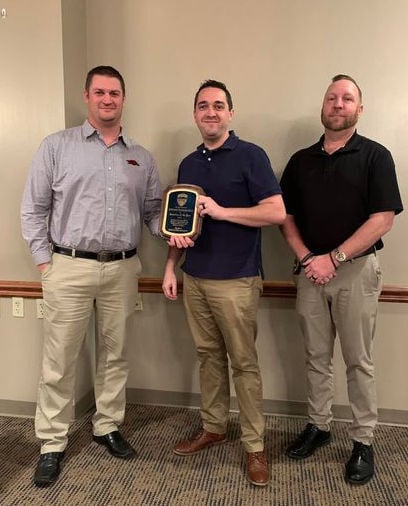 Sgt. Spenser Dangerfield, the 2021 Detective of the Year for the Searcy Police Department, participates in National Night Out, which was held last August at Spring Park. He said he got dunked while working the dunking booth.

Searcy Police Department desk officer T.C. Poskey (left) and Detective of the Year Spenser Dangerfield visit at the police station. Dangerfield said Poskey’s enthusiasm for his job during a shoplifting call pointed him in the direction of police work while Dangerfield was working at a retail store.

A shoplifting call while he was working at a former Searcy retail store led Spenser Dangerfield to become a police officer for the Searcy Police Department, which has named the sergeant to its 2021 Detective of the Year.

Dangerfield said he attended Searcy schools and got a job at Hastings, working there for five years, including when now desk officer T.C. Poskey responded to a shoplifting call.

“We’d have shoplifters there, they would come out and steal things and it would really bother me a lot,” Dangerfield said. “We had a shoplifter that came in and stole a bunch of video games one day. T.C. Poskey actually came to Hastings and was very excited to be there, and I wasn’t a huge fan of my job at the time and I saw how much he loved his job and I was just like, ‘Man, I want to enjoy my job that much.’”

Dangerfield said that was around 2010 and he “applied pretty much right after that, and it took me a couple of years to get on here. I remember I worked at Hastings from 2007 to 2012. That was my first job and this is the second job I ever had in my life.”

In addition to the Searcy Police Department, he said he applied at the White County Sheriff’s Office “but never heard back from them.”

“A couple years passed by and they [Searcy Police Department] said they had a spot open here and they gave me an interview and all of that,” Dangerfield said.

Looking back on his start, Dangerfield said his field training officer was Todd Wells, who is now a lieutenant with the department. “He was a patrolman that was in charge of our shift basically. I rode with a bunch of guys, good guys. I came back from the academy and spent time with another field training guy.”

Dangerfield said he served on patrol for seven years initially before becoming part of the Criminal Investigation Division as a detective. During his time on patrol, Dangerfield, who was the department’s 2016 Officer of the Year, said he trained a lot of officers as a field training officer but wanted to become a detective.

“I always liked solving puzzles and case work in general,” he said. “I was really interested in that kind of stuff.”

Dangerfield said he likes the “psychological part, kind of learning why people do what they do, just trying to get into people’s minds a little bit, especially when I get into an interview or something with them, talking to them and getting to know them – not just like interview them, ‘did you do it or not?’ more so like getting some backstory on them, trying to understand them a little bit more to I can understand why they may have done something like this.”

He said detectives go through the Reid Interrogation School “on the national and international level” to learn “interview and interrogation tactics” and also take We “general crime scene courses and things like that.”

One example of him putting his training to use was during at kidnapping case in 2018. “The suspect’s name was Tyrone Harris. He just did some really bad things to some young girls and that really bothered me.

“We really hit that case really hard. It was a pretty heinous crime that he committed. I think he actually got sentenced to 26 years time for time in prison, so he’s doing all 26 of those years. So I was very happy with the end result of that.”

Victim advocacy is big on Dangerfield’s list, helping crime victims, “communicating, keeping them in the loop about what is going on with their cases.” He said they do say thanks and one even offered to buy them all dinner. “We turned him down,” he said with a laugh.

Dangerfield said he also has an interest in looking into some of the department’s cold cases. He said “it feels good” when he accomplishes his job.

“I just want to make a difference for the guys that I work with so that’s why I kind of went down the supervisor path,” he said.

Wells said Dangerfield is over the field training officer system. “It’s a big passion of mine,” Dangerfield said. “I had a really good experience when I started with people training me.”

“Sgt. Dangerfield has done a great job since his assignment to the Criminal Investigation Division,” Hernandez said. “The fact that he received this award as a sergeant says a lot about the work that he is doing in that division. The award is based off of employee votes.”

Dangerfield said the department has 10 detectives and “we just got a new detective. I told him this the other day, ‘You are going to see an awesome experience when you all go to a scene together.’ Everyone just knows what to do. There’s not a lot of talking, everyone just does what they need to do. They know where the voids are on things that need to be done. We have to be acting as quickly as possible. We are going to be working ‘round the clock.”

He said he is pursuing a degree at Harding University in cyber-security degree that will help with his job since “that’s where everything is moving. John Stone, who works here as well, is a professor at Harding; he is actually my adviser.

Dangerfield said he also enjoys the community involvement part of his work, mentioning “being dunked in the dunking booth” during Searcy’s participation in National Night Out last August at Spring Park. The police officers, sheriff’s deputies, firefighter and NorthStar EMS workers join together to bond with the community through a cookout, games and conversations.

“I like doing that kind of stuff,” he said. “Like I say, I grew up here.” He added that he has also participated in the Law Enforcement Torch Run for Special Olympics Arkansas.

Dangerfield said he is back into running lately and recently participated in the Micah Rine 5K hosted by Harding Academy, where his wife, Claire, teaches high school English. He said he likes to hang out with his family, including his 3-year-old daughter, Addy, and plays video games when he has time.

“My wife is a great police wife,” he said. “When she sees me getting my stuff and heading out the door, she knows what’s going on.”