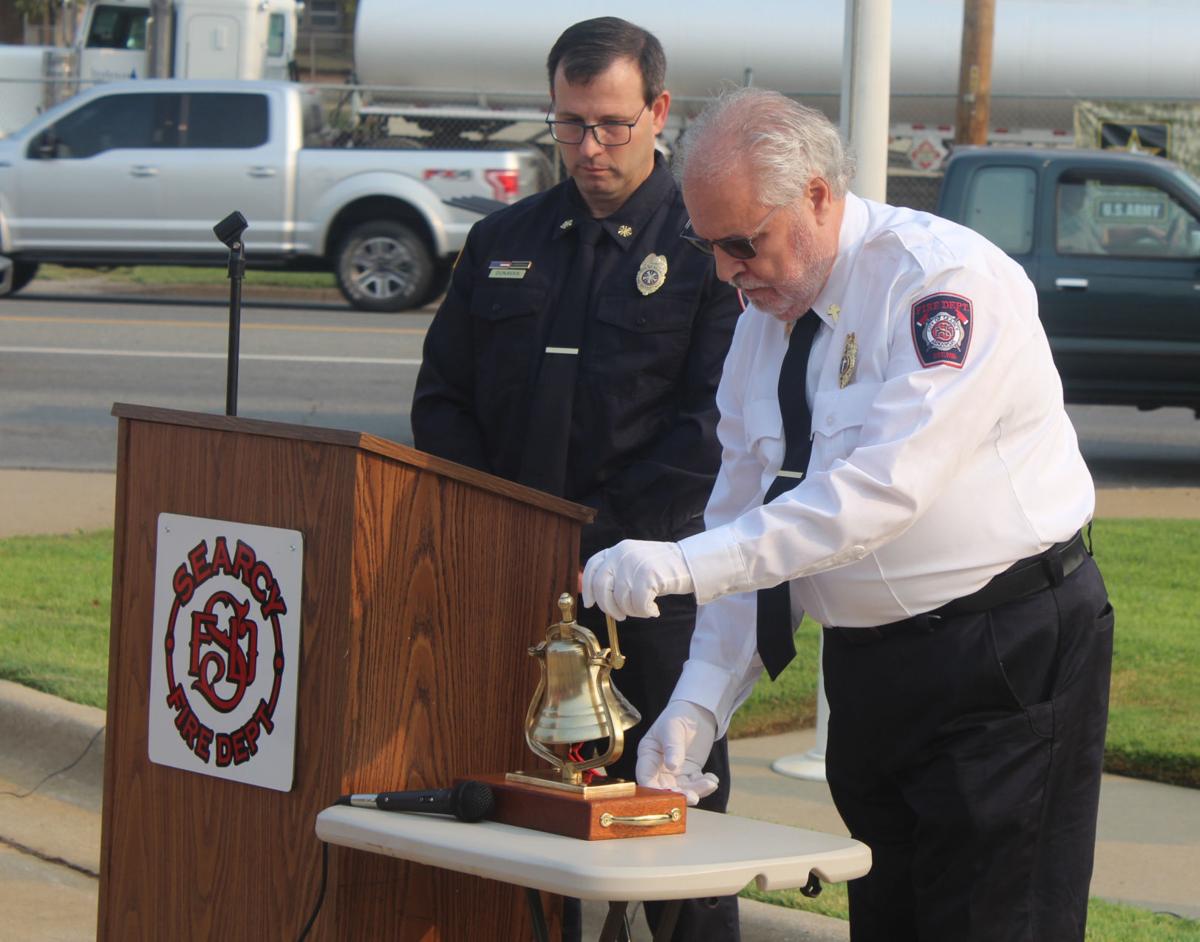 Searcy Fire Chief Brian Dunavan (left) and Fire Department Chaplain Tom Martin at Central Fire Station ring a bell Saturday to remember first responders who lost their lives because of the Sept. 11, 2001, terrorist attacks. Dunavan said the bell ceremony is a tradition that has been around more than 200 years and symbolizes the engine company leaving and coming back into quarters. 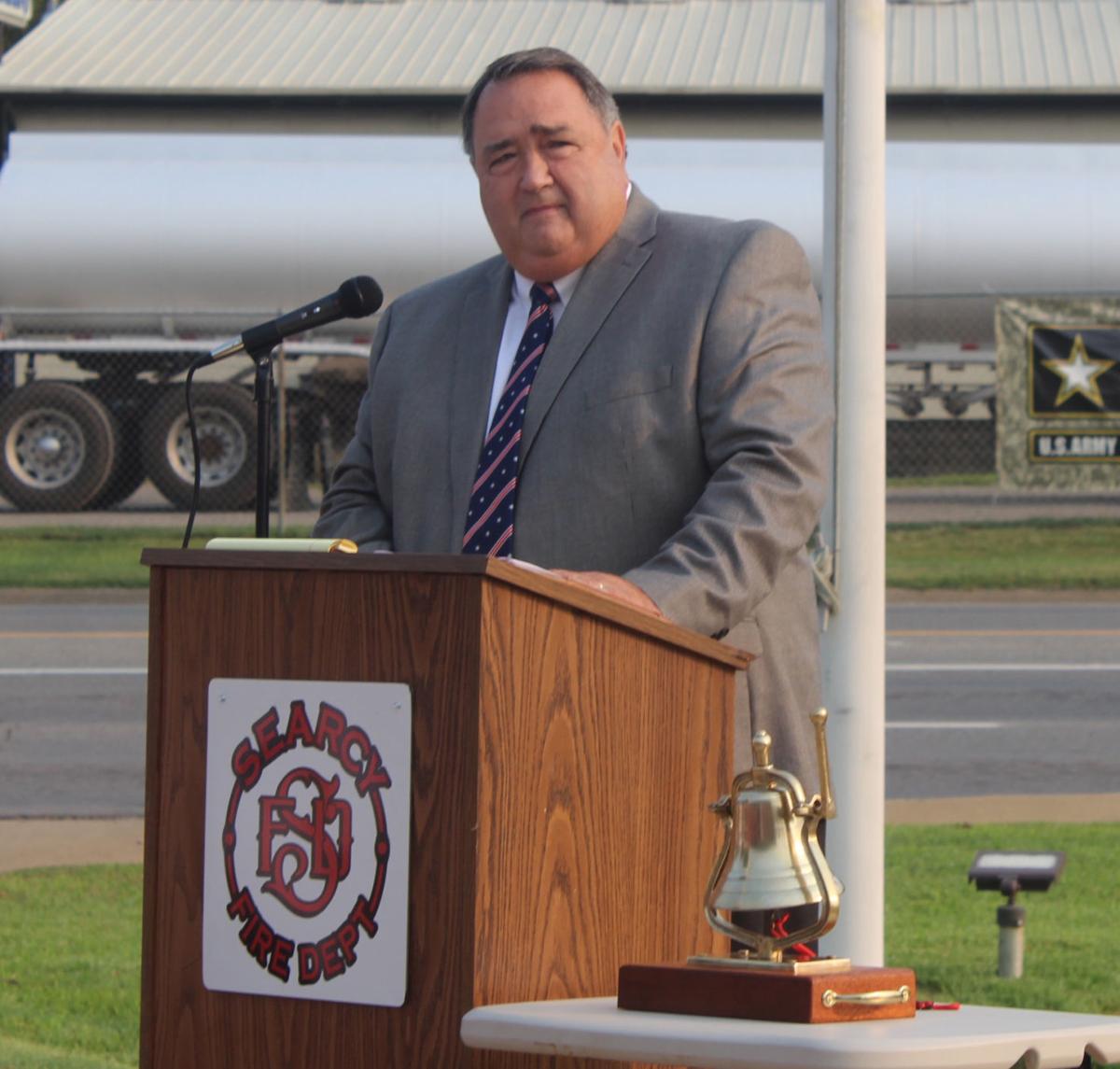 Mayor Kyle Osborne was the featured speaker of Searcy’s 9/11 20th anniversary remembrance Saturday morning at Central Fire Station. He said every year should be remembered the way the anniversary of the terrorist attacks has been remembered. 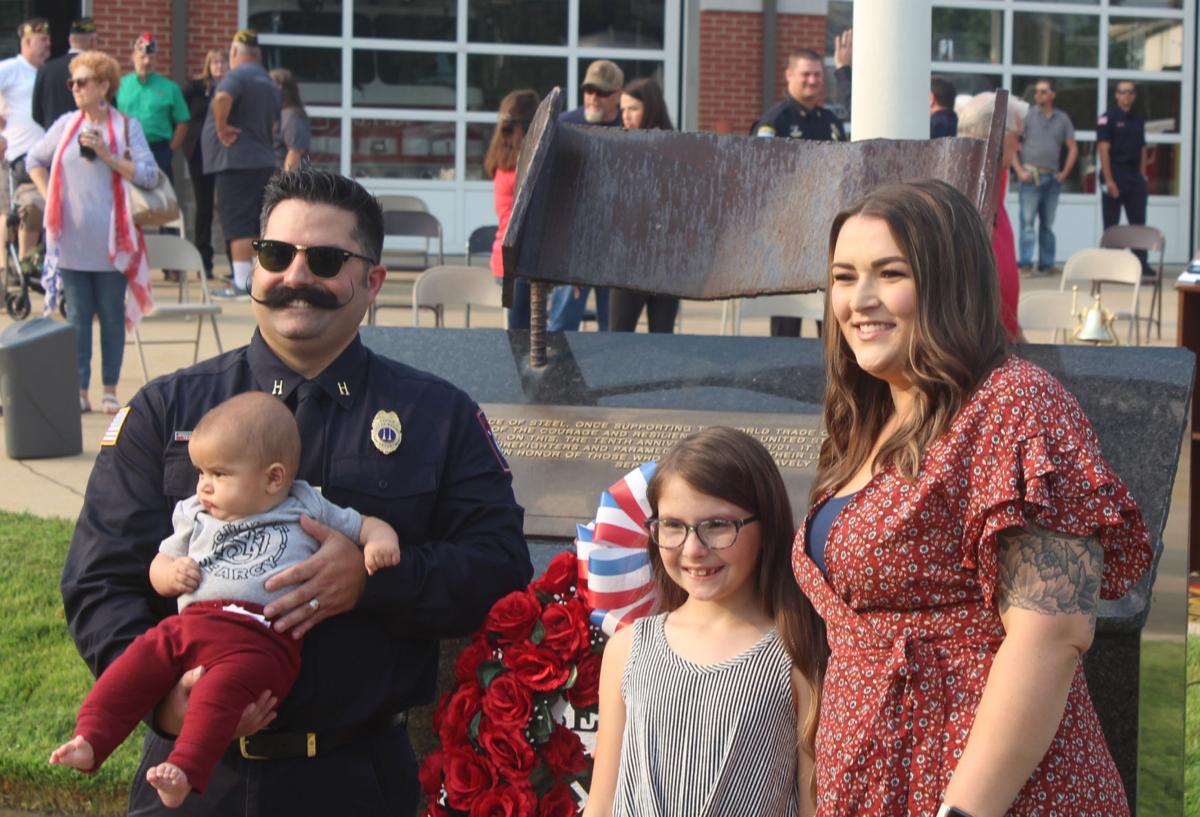 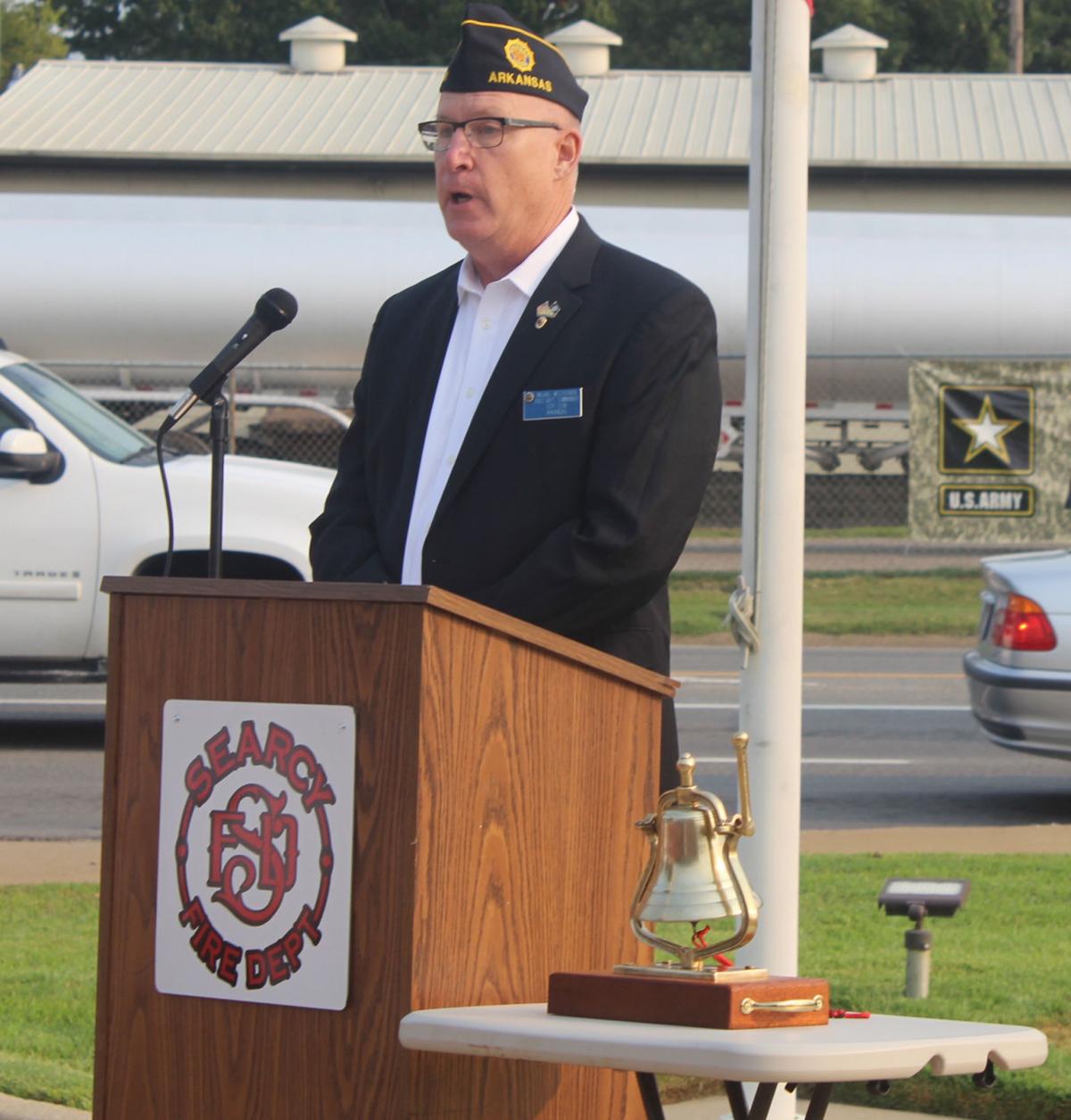 Michael Westergren, a retired member of the United States Air Force and past state commander of the American Legion, talks about the importance of Gold Star families at Searcy’s 9/11 remembrance Saturday. 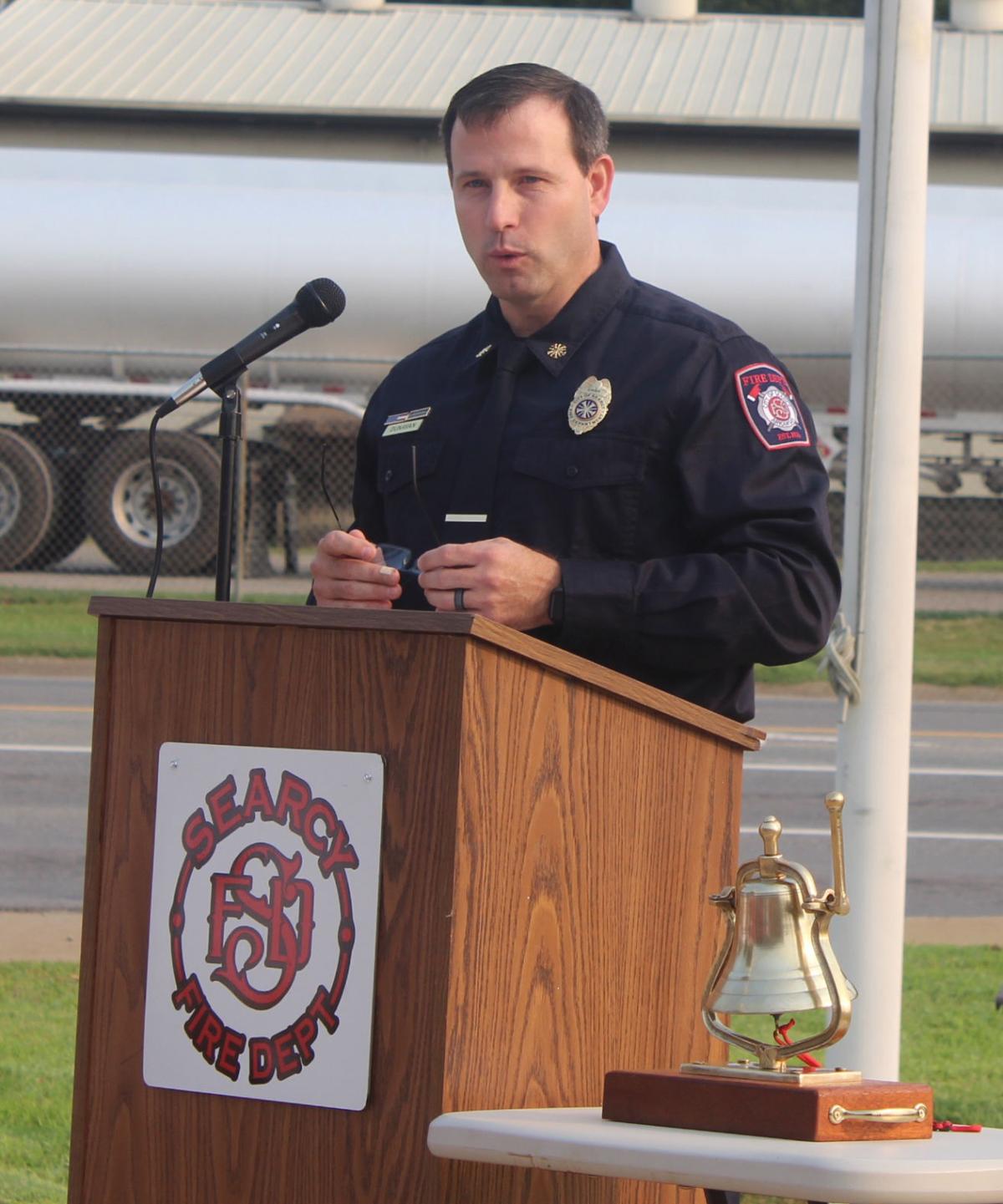 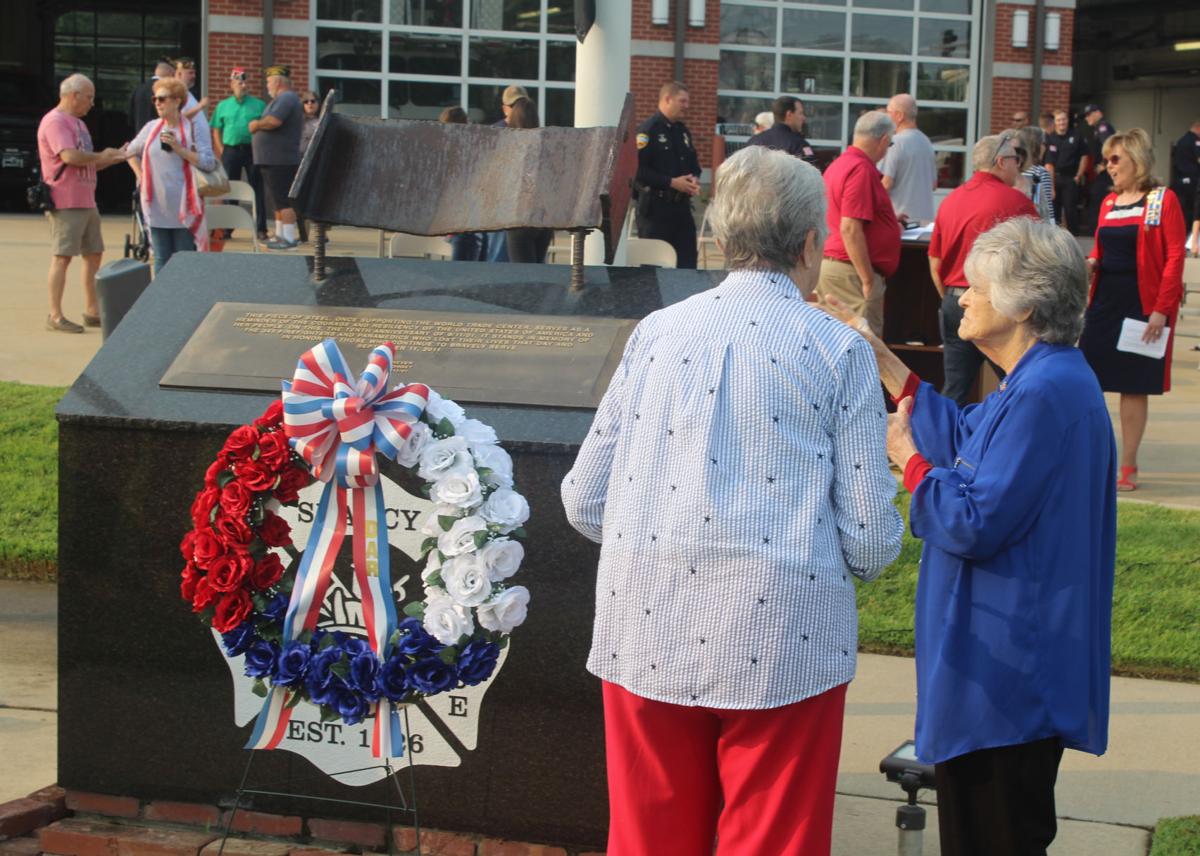 Members of the Daughters of the American Revolution lay a wreath by the 9/11 monument at Searcy's Central Fire Station on Saturday morning. 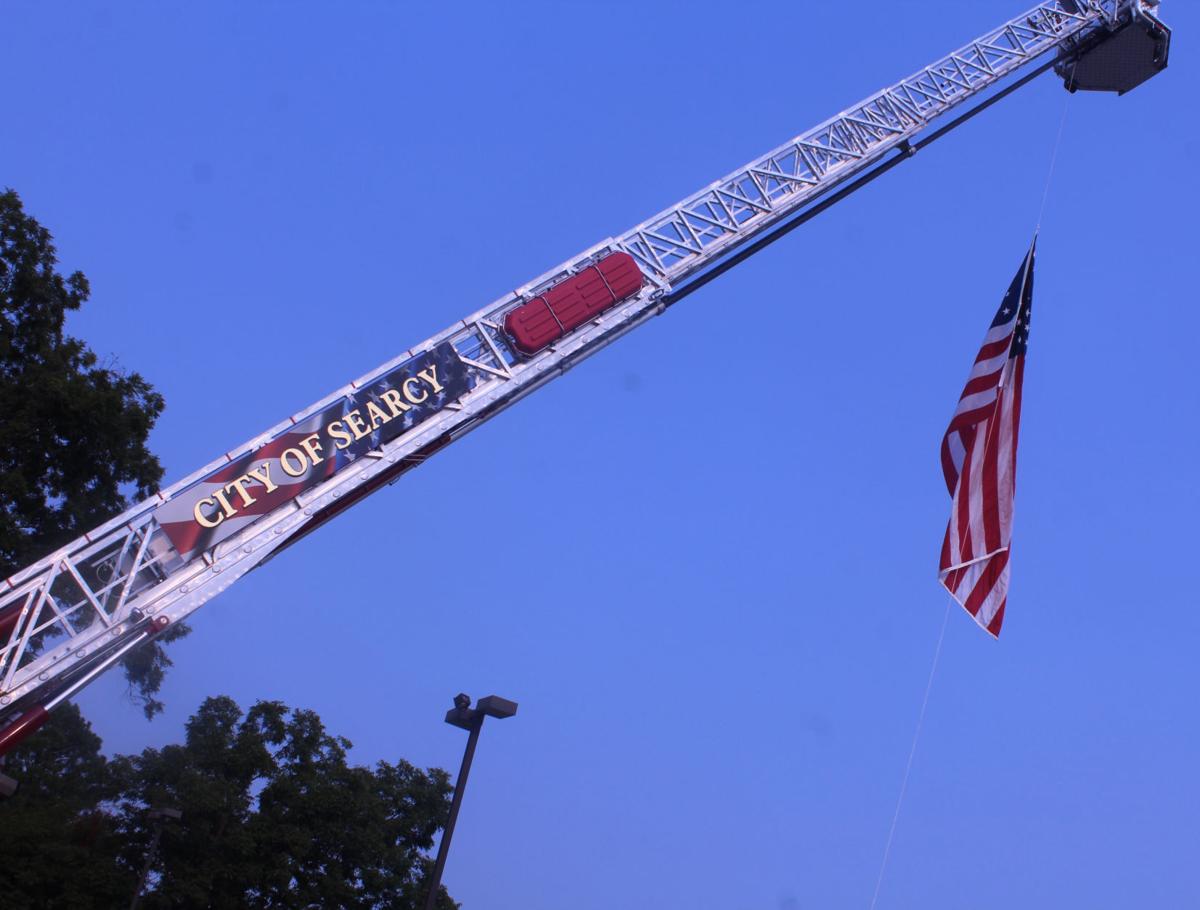 Searcy Fire Chief Brian Dunavan (left) and Fire Department Chaplain Tom Martin at Central Fire Station ring a bell Saturday to remember first responders who lost their lives because of the Sept. 11, 2001, terrorist attacks. Dunavan said the bell ceremony is a tradition that has been around more than 200 years and symbolizes the engine company leaving and coming back into quarters.

Mayor Kyle Osborne was the featured speaker of Searcy’s 9/11 20th anniversary remembrance Saturday morning at Central Fire Station. He said every year should be remembered the way the anniversary of the terrorist attacks has been remembered.

Michael Westergren, a retired member of the United States Air Force and past state commander of the American Legion, talks about the importance of Gold Star families at Searcy’s 9/11 remembrance Saturday.

Members of the Daughters of the American Revolution lay a wreath by the 9/11 monument at Searcy's Central Fire Station on Saturday morning.

Mayor Kyle Osborne believes that the Sept. 11, 2001, terrorist attacks should be treated the same way “every year” that remembering what happened has been for the 20th anniversary.

“We should be here every year; we should be here not every 20 years,” Osborne said during a speech Saturday at the 9/11 ceremony at the Central Fire Station on West Beebe-Capps Expressway.

He asked the crowd how many of those present remembered exactly where they were standing during the attacks that morning when members of the al-Qaida terrorist organization hijacked and flew commercial airliners into the two towers of the World Trade Center in New York and the Pentagon in Washington, D.C., and crashed into a field in Pennsylvania

“I was with three other police officers in Chief J.R. Thomas’ office and the first plane had struck the tower, and we’re like everyone else, we’re trying to figure out what happened,” Osborne said. “How did a pilot not see the tower? While we were talking, we were watching the TV and we watched the second plane hit the tower, and we look at each other and realize this is no accident, we are in trouble.”

As the events played out the rest of the day, “the worst terror attack in U.S. history,” Osborne said. “You’re calling your loved ones, you’re calling everyone that you know that’s in the military, ‘What’s going on? What’s going to happen next? What do we do? What do we do?’ As we watched the first responders, most of them firefighters, running straight into the mouth of these buildings and we watched the thousands upon thousands of survivors crossing the bridges, trying to get away from this carnage, and there’s a steady stream. We all watched in on TV ... of firemen, EMTs, paramedics, police officers, going the opposite direction, running straight into these buildings.

“An hour and a half later as we watched and the first tower fell, again we look at each other ... surely, everybody’s out of there. A few minutes later, the second tower falls. As we watched the news for the rest of the day and trying to figure out what has happened, they are showing us pictures of fire engines crushed beyond description, police cars crushed, the politicians getting involved.

Osborne said of the nearly 3,000 people who perished that day, 400 were first responders, and of that 400, 347 were firefighters.”I salute you gentlemen,” he said, “and the police officers. the EMT personnel. We owe it to you. We owe it to you to never, never forget, and I promise you, I will never forget, and as long as I’m mayor, Chief, if you want to do this every year instead of every 20 years, I’ll be here. I’ll be here.”

The Searcy Fire Department holds a 9/11 remembrance every year, but this year’s was more involved than usual, according to Fire Chief Brian Dunavan.

Osborne also pointed to a piece of steel beam from the World Trade Center near the flag pole at the station. “This is a reminder of 20 years ago,” he said. “It will be here as long as this fire station is here. Gentlemen, I salute you from the bottom of my heart. Thank you, thank you for your service. We do appreciate you, I promise.”

“Today, we pay homage to those who lost their lives in the attacks 20 years ago and those that rose to take the fight back to a deplorable enemy that despises our American values,” Westergren said. “Over 4.6 million Americans have served in our military since 9/11. Each volunteered to protect our nation, to pit our national might against tyranny. Over 7,000 paid the ultimate price by laying down their lives defending America’s values of liberty, freedom and democracy.”

For every “warrior” lost in battle, Westergren said, “there’s a mother or father, brother or sister, spouse, son or daughter who knows the real cost of our freedom. We call them our Gold Star Families.”

He said if you asked one of these families why their family member joined the military, “most of them will tell you it was for love – love of family so that someone else doesn’t need to go into harm’s way, love of country and all that protecting our freedom requires, love of our brother or sister on their left and on their right, the family only someone in the military can know about and that can give them and receive so much love from.”

He said there are at least five Gold Star Families in White County who have lost a loved one since 9/11. He read the names of each military member and said Sunday, Sept. 26, is Gold Star Family Day. “Please, never forget the names of our fallen warriors.”

Dunavan thanked his firefighters, the police officers and NorthStar EMS for their service to the city.

He said Americans should never forget the firemen, police officers and EMS personnel who died in 2001.

“We should never forget them, and it’s because of those type of people, the military, that we have the freedom today to do this,” Dunavan said. “We need to remember those who have sacrificed for us that give us the freedom that we can live in a community like this, and it’s up to us to carry the torch and to make the sacrifices we need to to keep it.”

A bell ceremony was held after Dunavan explained its meaning.

“The men and women that are today’s first responders are confronted with a more dangerous work environment than ever before,” he said. “All are forced to continually change strategies and tactics to accomplish the tasks and complete the call. Our methods may change, but our goals remain the same as they were in the past, to save lives and to protect property, sometimes at a terrible cost. This is what we do. This is our chose profession. This is the tradition of firefighters, first responders. Today’s fire service is ever changing, but it is steeped in traditions over 200 years old.”

Dunavan stopped speaking as an alarm was sounded over the speakers inside the fire station station. “I’m just going to pause and let them respond real quick.” He said they had an open lane as the sirens blared and the fire trucks started to roll out. The crowd burst into applause as the firefighters left the station and rolled onto Beebe-Capps Expressway to rush to the call.

“We didn’t plan that,” Dunavan said.

Returning to his explanation, he said one of the traditions for the fire service is sounding the bell. In the past, it signified the beginning of a day’s shift. Throughout the day and even at night, each alarm was sounded with a bell that “called for those brave souls to respond for the good of the fellow citizens.”

“We utilize these traditions as symbols which reflect honor and respect to those who have given so much and have served so well, Dunavan said. “To symbolize the devotion that these brave souls have had for their duty, a special signal of three bells, three rings, three times each represents the end of our fellow brothers’ and sisters’ duties, that they will be returning to quarters. To those who have selflessly given their lives for the good of their fellow man, their tasks completed, their duties well done, to those brothers and sisters, their last alarm, they are all home.

“Today, we sound this bell as a 20-year remembrance for not only the 2,726 lives that were lost of Sept. 11, 2001, but also for the ultimate sacrifice of 343 firefighters, 60 law enforcement officers and eight EMS personnel. May they all rest in peace and may their families both in blood and in uniform be surrounded by the peace of God’s presence. Together, we thank them for their service and their ultimate sacrifice.”