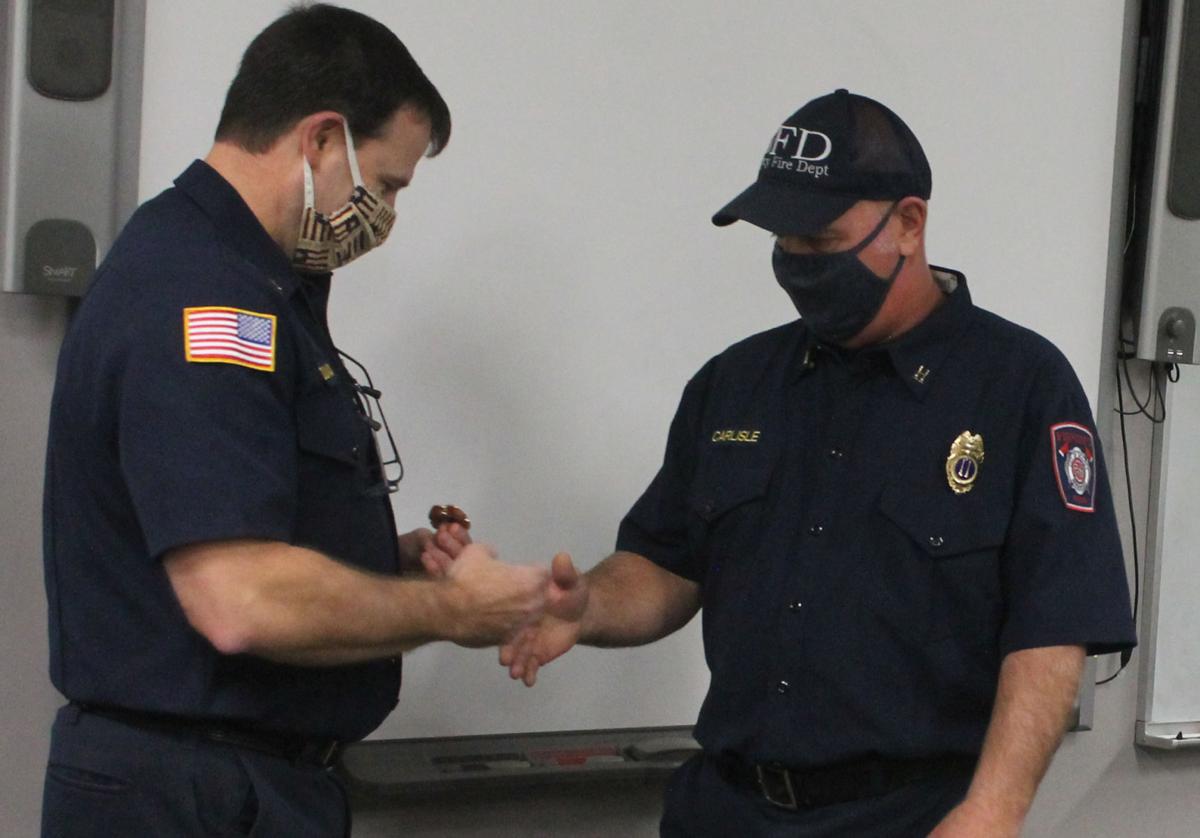 Keith Carlisle (right) gets promoted to battalion chief Monday at the Central Fire Station by Searcy Fire Chief Brian Dunavan. Carlisle replaces Eddie Hollis, who officially retired after finishing his last shift Monday morning. Carlisle has been with the Searcy Fire Department for 23 1/2 years after serving 10 years with the West Memphis Fire Department. 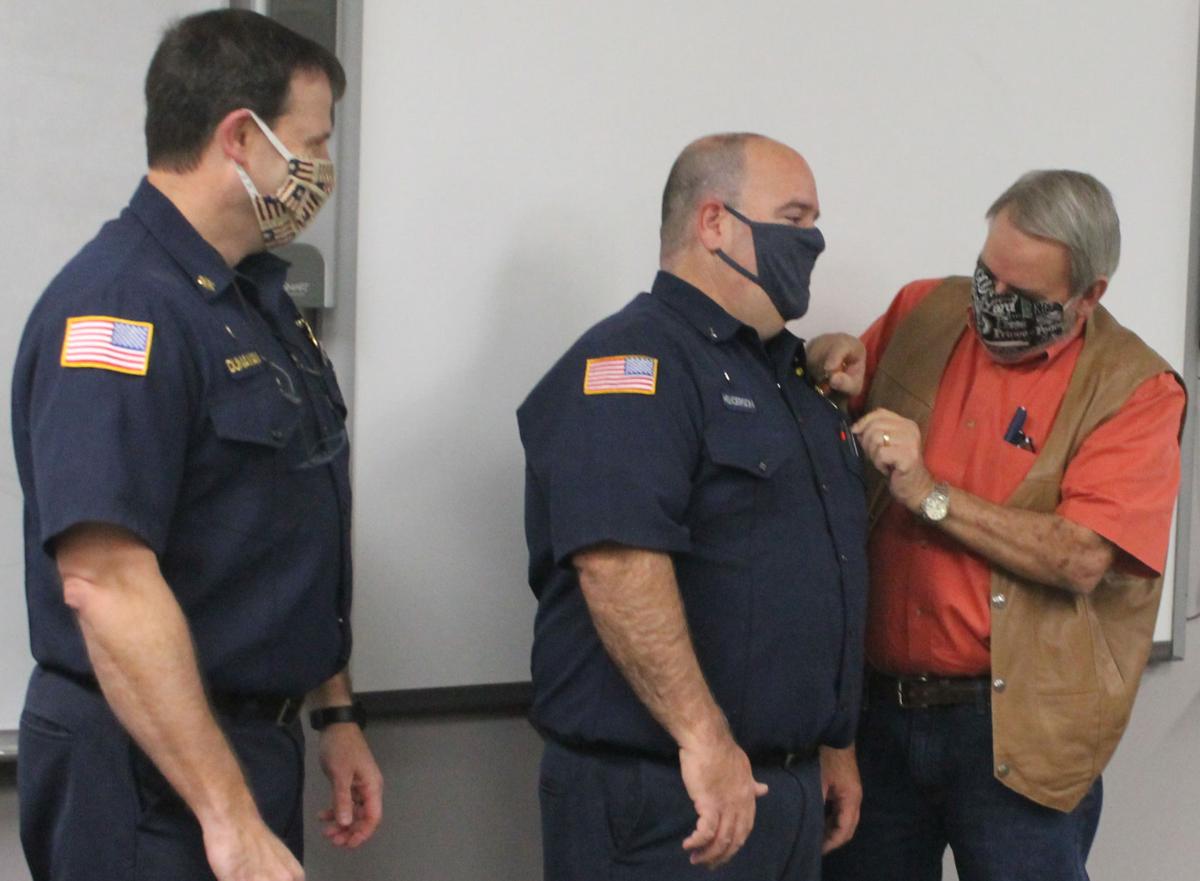 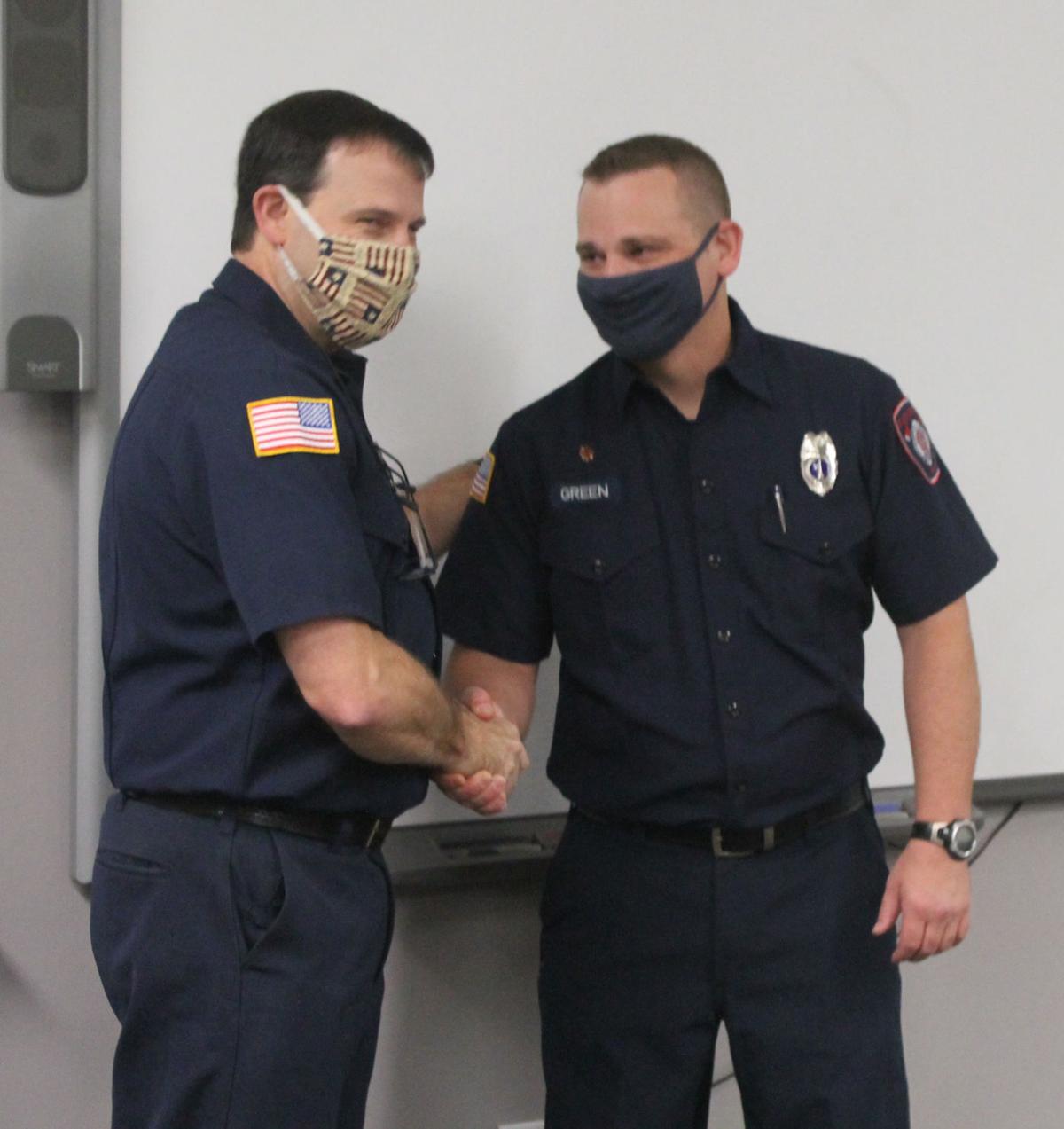 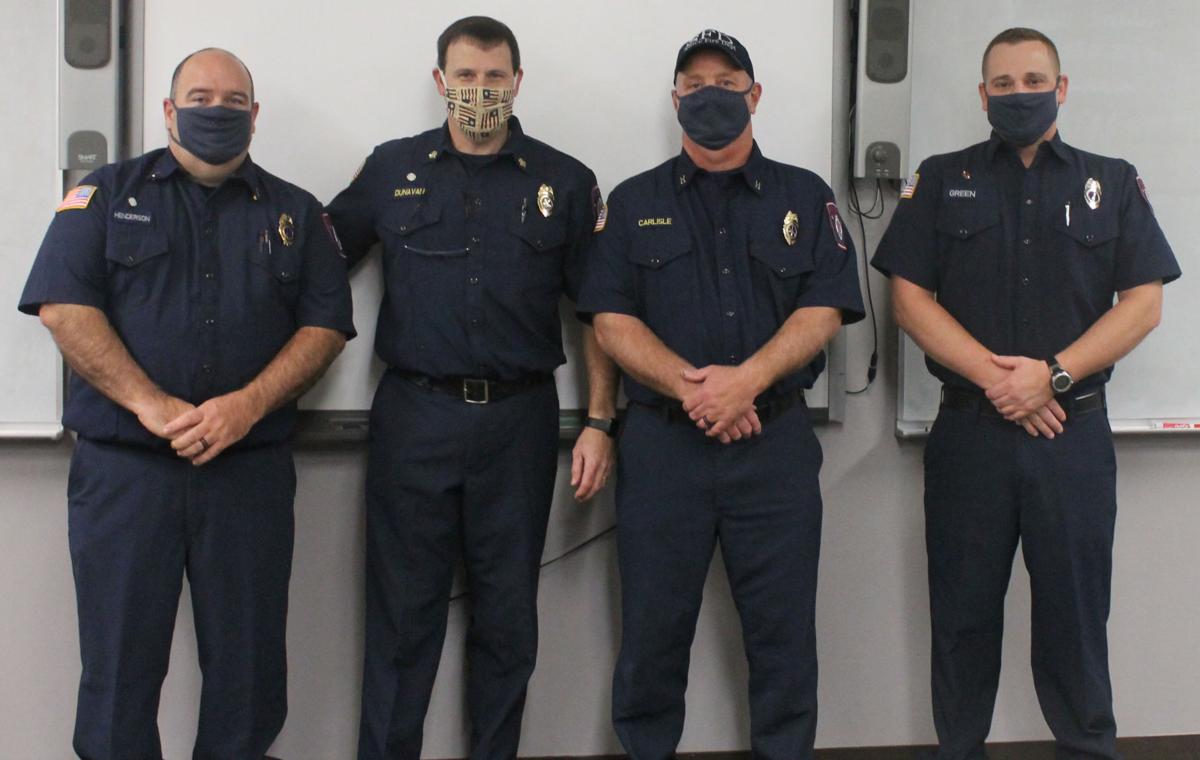 Keith Carlisle (right) gets promoted to battalion chief Monday at the Central Fire Station by Searcy Fire Chief Brian Dunavan. Carlisle replaces Eddie Hollis, who officially retired after finishing his last shift Monday morning. Carlisle has been with the Searcy Fire Department for 23 1/2 years after serving 10 years with the West Memphis Fire Department.

In his opening remarks, Dunavan thanked retiring Battalion Chief Eddie Hollis for his years of service to the department. Hollis had just gotten off work at 7 a.m. from his last shift.

“First of all, I’d like to thank Chief Hollis because we are having this [ceremony] today because of him,” Dunavan said before fellow firefighters gave Hollis a round of applause. He wished Hollis all of the best in his retirement and thanked him “for all the service” he gave to the department.

The first promotion Dunavan announced was John Green to lieutenant. Next, Dunavan called up John Henderson to be pinned as captain. His dad, Dave Henderson, a retired lieutenant with 25 years of service to the Pine Bluff Fire Department and 39 total years of fire service, took care of pinning his son with his new badge. Dave Henderson said he retired as a lieutenant. Keith Carlisle was called to the front of the room and promoted to fill Hollis’ shoes as battalion chief.

Dunavan said he has “real high hopes for the ones we’ve promoted. I think they are going to do an awesome job.” He reminded the other firemen in the room that there is a new promotions test coming out. “So maybe this next year we will have another one to give.”

Henderson, who is from Pine Bluff, said he was been with the Searcy Fire Department for 18 years, spent almost a year as a firefighter in Pine Bluff and was a volunteer firefighter for seven or eight years in Watson Chapel.

Asked for what responsibilities come with being a captain, Henderson said, “you are in charge of the truck, in charge of the crew and in charge of the scene until the battalion chief gets there. It’s a little bit more on your shoulders than just being a driver. It’s very fulfilling, I have been looking forward to it for several years and I just got the opportunity when Chief Hollis retired. Things work out for the best.”

Henderson said he has been married almost 25 years. “Got a senior in high school and an eight-grader,” he said. “I followed in my dad’s footsteps. He was a retired firefighter in Pine Bluff, 25 years there and it’s just a good family.”

“I have been in fire service since 1988,” he said. Carlisle, whose wife’s name is Tisa, said he has “two grown kids, a grown daughter, 28-year-old Krista Carlisle, and a 24-year-old son, Connor Carlisle.

The new responsibilities for Carlisle, he said, will be mainly staffing and administrative duties. “You will be incident commander at fire scenes, emergency scenes. You will be in charge and directing traffic at the scenes. It is exciting.” There are three shifts, and each shift has a battalion chief. They are stationed from here [Central Fire Station], they are in charge of the whole day’s operation. That battalion chief is responsible for the operation of the fire department that day.”

Carlisle said that since Searcy is a small town, “you feel like you are helping someone you know. That’s what the fire service is all about. It’s community service and we’re there for helping the community.”

Green said he has been with the Searcy Fire Department for seven years and graduated from White County Central in 2000. Asked about the responsibilities of a lieutenant, he said “operation of the fire pump on the fire engine is the biggest one and the responsibility of everything on that truck and the truck itself; keeping all the items intact in there and getting everyone to the scene safely.”

Since Green is from Searcy, he said it means a lot to him to be a part of the community’s health and safety. Green thanked his wife, Taryn, and his four children for all the support they give him.

Who: Keith Carlisle to battalion chief; John Henderson to captain and John Green to lieutenant