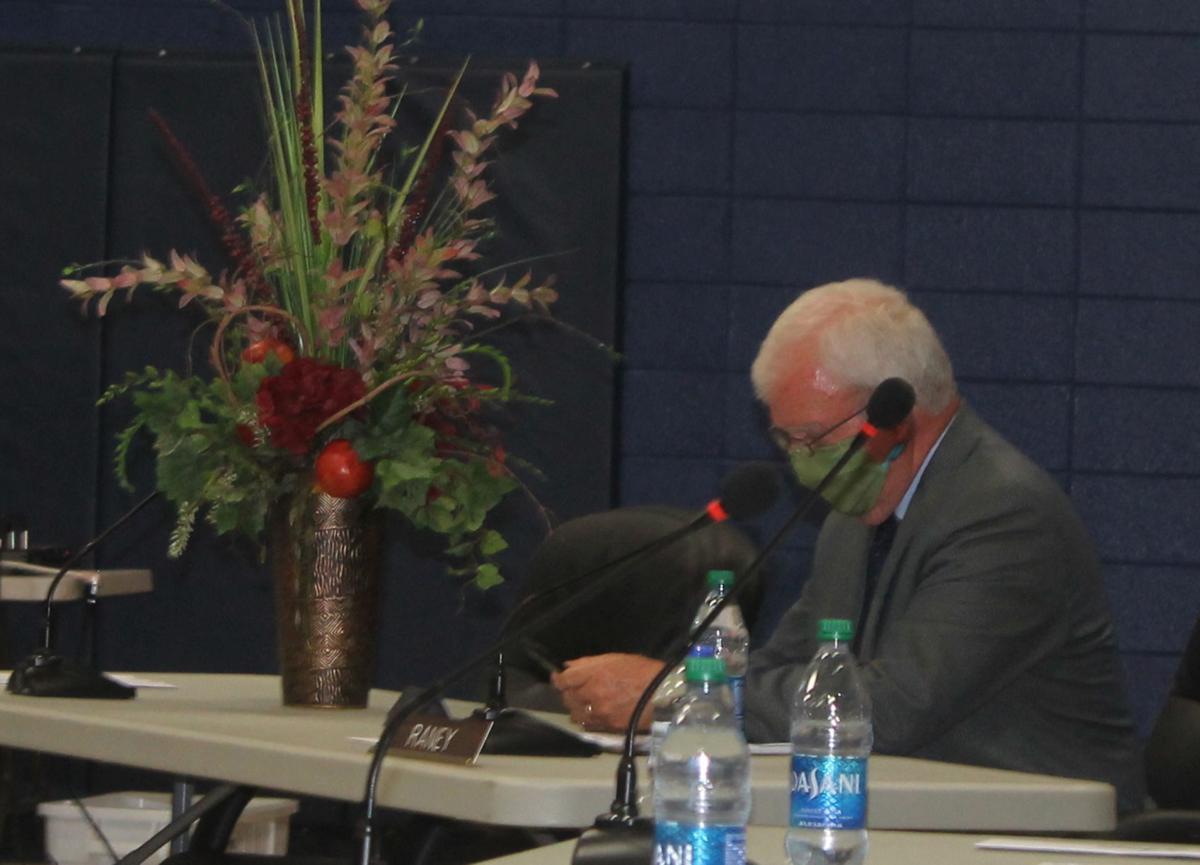 Searcy Councilman Don Raney placed a floral arrangement at the place usually occupied by fellow Councilman Dale English, who died Monday. Mayor Kyle Osborne asked the council to observe a moment of silence to recognize the 33 years English served on the council. English also retired as a captain from the Searcy Fire Department in 1985 after 20 years of service.

A somber mood hovered over the Searcy City Council meeting at the Carmichael Community Center on Tuesday night as a place at the table belonging to Dale English, a 33-year councilman, was filled by a flower arrangement placed there by Councilman Don Raney, who sat next to him at agenda and council meetings.

“Before we get started tonight, I’m going to ask that we have a moment of silent for Dale English, who passed yesterday,” Mayor Kyle Osborne.

English, 80, had a long history of service to the city. He was a Searcy firefighter from March 1965 until he retired as captain in 1985.

All in all, Osborne said he had known “Mr. English” for almost 40 years.

“He was a huge advocate for youth sports in Searcy,” the mayor said. “He had a love for the sports complex. He was excited about the A&P Commission and the fact that they were looking at doing these improvements. We had talked a couple of times about what improvements would be made out there. He was big into youth sports.”

After English retired from the Searcy Fire Department, Osborne said he was kind of like him and realized retirement was not his thing, ran for public office and won.

“He’s one of these councilmen, he thinks things through,” Osborne said. “He’s very intelligent and he just made the right choice. I’ve watched him for years and he was a very good council member and he will be missed.”

Council member Rodger Cargile said, “I have known Dale my whole life. I don’t ever remember not knowing Dale.”

“I came on the council, I guess, in March of ‘19 so I had been working with him a little over a year. ... He has been devoted to the Searcy community for so long and he is a wealth of knowledge.

“Anything you need to know about what happened 10 years ago or 15 or 20 years ago, especially from council and what goes on and what happened then, he was someone we could all talk to about anything related to Searcy history. If you wanted to know about who occupied a certain building in 1974, he could tell you. He was such a wealth of information and he will be missed big time.”

Former Searcy Mayor David Morris said English “had so much institutional knowledge about Searcy. He was indeed an asset to the city and the City Council.”

This was to be English’s last year on the council, as he had chosen not to run again in November. Running for his seat will be Tonia Hale and Tommy Centola.

As far as selecting a replacement for English for the rest of his term this year, Searcy City Attorney Buck Gibson referred to Arkansas Code Annotated 14-43-411, dealing with council member vacancies:

“When a vacancy occurs in any position of council member in a city having a population of twenty thousand (20,000) or more according to the most recent federal decennial census, a new council member shall be chosen in the following manner:

“If the unexpired portion of the term of a council member exceeds one (1) year, at the first regular meeting after the occurrence of the vacancy, the city council shall proceed to either elect by a majority vote of the remaining members elected to the council a council member to serve for the unexpired term or call for a special election to be held in accordance with [ACA] 7-11-101 to fill the vacancy; or

“If the unexpired portion of the term of a council member is one (1) year or less, a successor shall be chosen by a majority vote of the members of the council.”