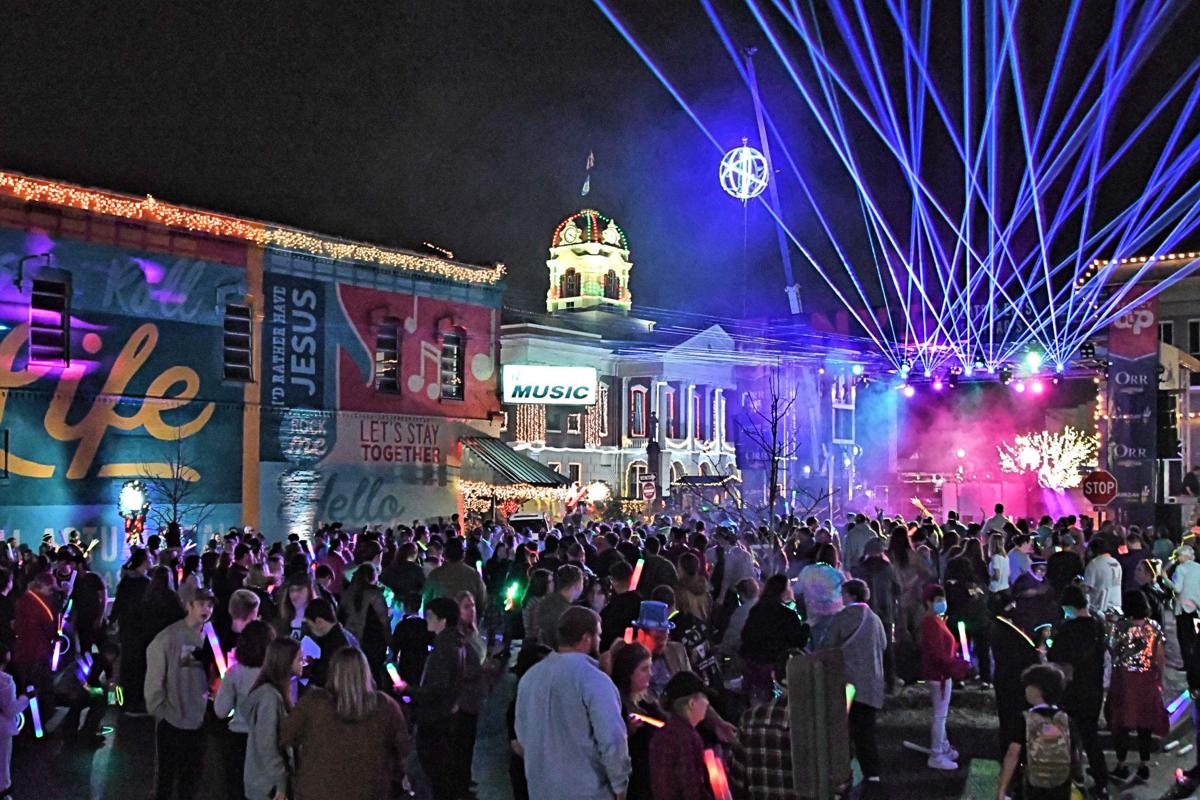 Rain holds off Friday enough for attendees to enjoy dancing in the streets before the ball drop in downtown Searcy at midnight to bring in the new year. 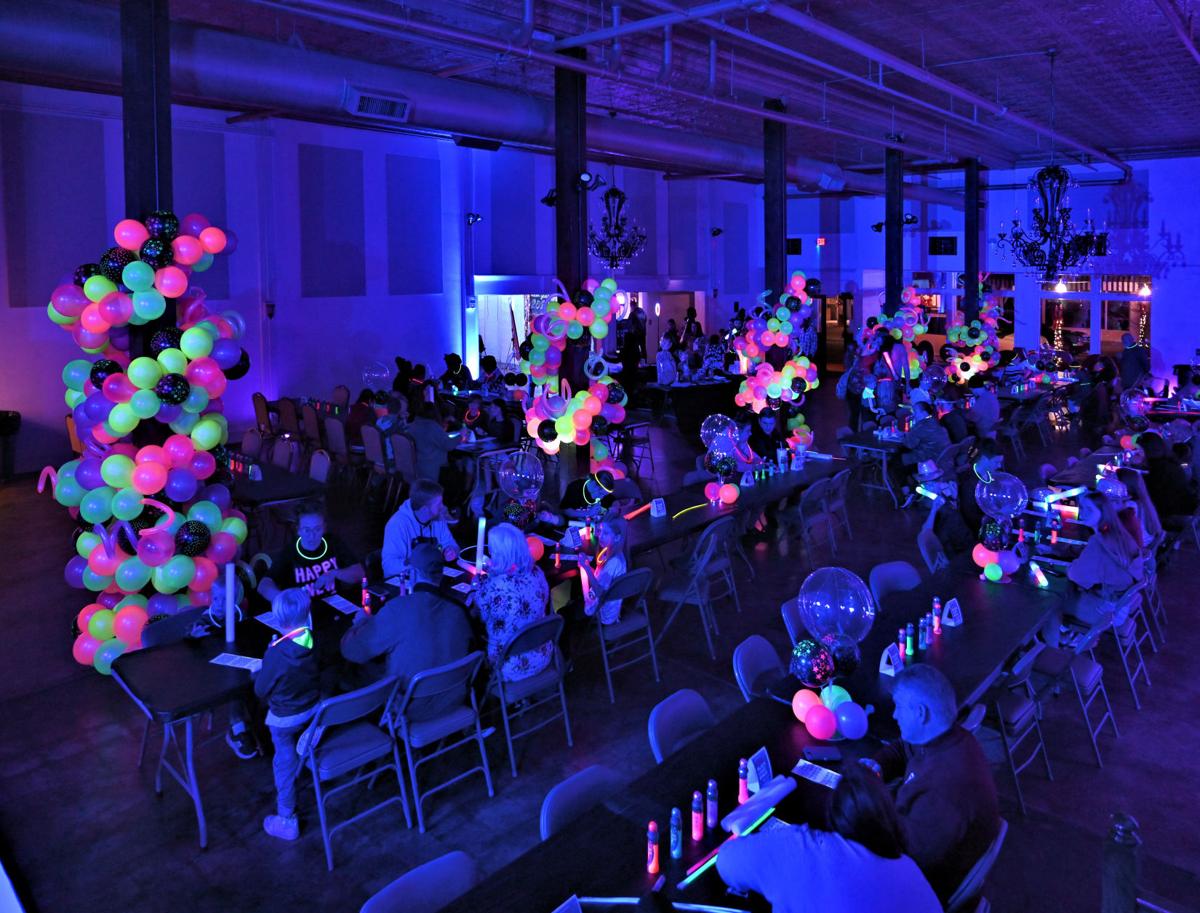 Blacklight bingo in the Robbins Sanford Grand Hall was among the activities held as part of the Searcy Beats and Eats New Year’s Eve celebration.

Rain holds off Friday enough for attendees to enjoy dancing in the streets before the ball drop in downtown Searcy at midnight to bring in the new year.

Blacklight bingo in the Robbins Sanford Grand Hall was among the activities held as part of the Searcy Beats and Eats New Year’s Eve celebration.

Although the threat of rain on New Year’s Eve forced the cancellation of urban laser tag and big-screen football, the clouds parted for the Searcy Beats and Eats ball drop and laser show to go off without a hitch Friday night.

“We’re just really blessed that the Lord gave us good weather so that we could stay here all the way till midnight,” co-coordinator Mat Faulkner said after the ball dropped at midnight. “It’s so much fun just to get together with the community and celebrate Searcy and Arkansas and just being a community together.

Debbie Mattice came from Mountain View to attend the ball drop. “I’m a teacher at Timbo High School and we are here because we wanted to come out here and celebrate and watch the ball drop,” Mattice said. “My daughter, Laci, looked this up on the internet.”

Laci Mattice, who is from Branson, Mo., said, “It’s just a fun atmosphere. Everybody looks like they are having a good time and are just doing what they want to do. The music is great.”

Searcy police officer Michael Bullock and his wife, Julia, also attended the event with several exchange students – Arthur from Brazil, Phillip and Liam from Germany, Sofia and Cecilia (Cece) from Italy, Mahv from Tajikistan and Liva from Latvia – who shared some of the differences in how the new year is celebrated in their countries.

Mahv said in her country in central Asia, they all sit together at a table and wait until midnight to welcome the new year. Arthur said in Brazil, all people wear white clothes and have a lot of parties at the beach leading up to the new year. Liva said in Latvia, they usually watch the fireworks “and the adults will drink something and then we have a full-on meal prepared of our traditional foods and we spend this time with family.” Cece said, “We do parties. We open champagne at midnight and everybody has fun and we dance and listen to music. I like the music here tonight and the energy and the atmosphere.”

Lots of glow wands and glow necklaces were passed out, held and shook as attendees danced to the DJ’s music from the stage near the ball. Attendees were encouraged to dress to glow.

Faulkner was handing out glow items at the event and said 20 minutes into the event that “we have a pretty good crowd that is building every minute. We are so thankful for good weather because that makes a big impact and everybody is full of smiles; that’s what it’s all about.”

KATV Channel 7’s Ansley Watson, who served as master of ceremonies, said she attended the ball drop two years ago and loved “coming back.”

“I absolutely love Searcy. This is a place that I feel is home to me,” said Watson, who graduated from Harding University in 2015 with a degree in broadcast journalism. “I have been looking forward to this. Searcy puts on a great ball drop. It’s my favorite in central Arkansas for sure.”

In addition to the outdoor gathering, the event featured blacklight bingo and a dance party in Robbins Sanford Grand Hall as well as a hot cocoa bar.

“Cricket” of Cricket Creations in Searcy, who was inside the Robbins Sanford to do face-painting during blacklight bingo, said she was doing “lots of blacklight face-painting, regular face-painting and painting with lots of glitter, just whatever you might want.” She said the enjoyment she gets out of working these kinds of events is “honestly, the kids’ faces when they see what they look like [after their faces are painted]. It’s the best thing ever. I have a huge kit with at least 32 colors.”

Blacklight bingo was originally a ticketed $5 event but anyone who bought a $5 pass has been refunded and it was free for all.

Beats and Eats posted on its Facebook page Friday afternoon that urban laser tag was canceled “due to damp streets and safety concerns. We don’t want anyone to slip and get hurt.” Big-screen football was canceled “because it is a large blowup screen and we didn’t want to risk wind issues,” the post stated.

There was a video selfie station inside the Robbins-Sanford. The cost for it was $10. A snow machine was also present with many dancing near it as the night went on.

Faulkner said the Beats and Eats Committee always likes to keep events fresh, adding new things, so this year the feel was “a mini-New York City.” As attendees danced along Spring Street, they could see buildings on both sides.

The Beats and Eats Committee consists of about 20 volunteers and Faulkner said they work year-round on various events but the real reward comes when the community comes together and they see the smiles of the faces of those who attend the events.