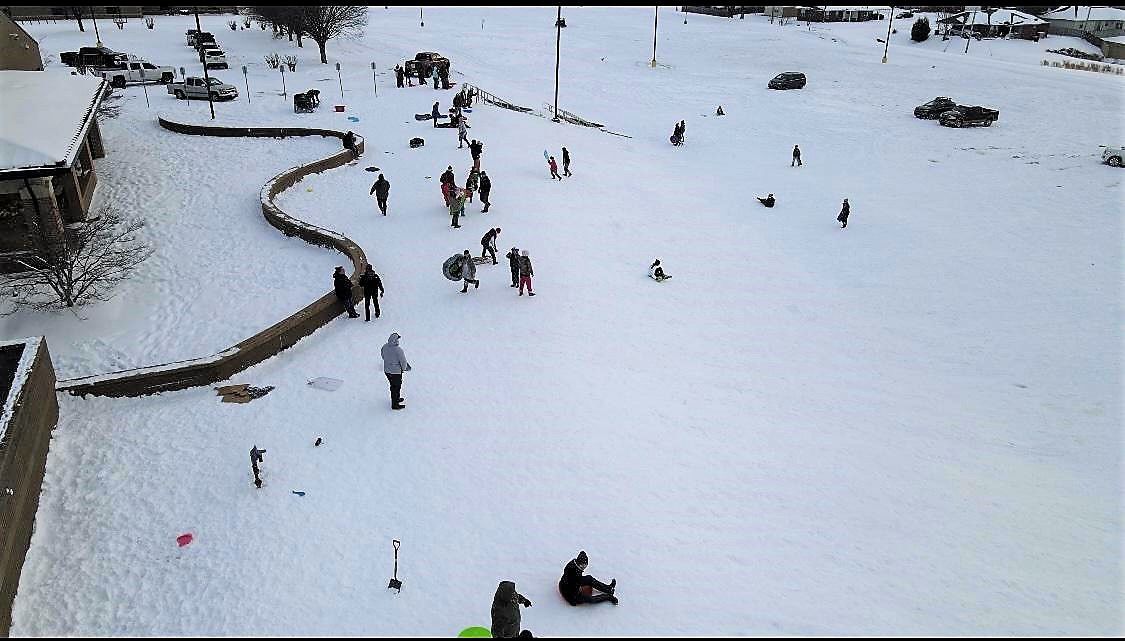 Sledders flocked to Searcy High School to take advantage of the snow dumped on the area by two snowstorms this week. 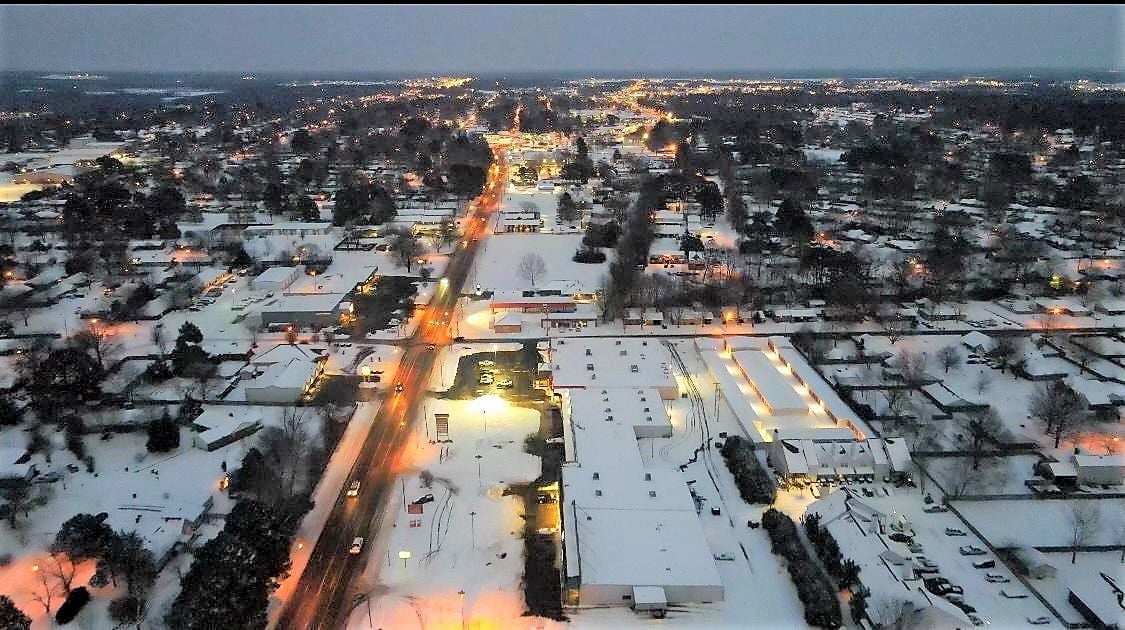 Snow blanketed the city, county and state from Sunday through Friday, with the abnormal winter weather causing all kinds of issues for residents. These photos were taken Thursday using a drone.

Sledders flocked to Searcy High School to take advantage of the snow dumped on the area by two snowstorms this week.

Snow blanketed the city, county and state from Sunday through Friday, with the abnormal winter weather causing all kinds of issues for residents. These photos were taken Thursday using a drone.

Possibly all of the records for temperature and snowfall in Searcy are expected to stand, although the National Weather Service in North Little Rock has not received official numbers yet, according to meteorologist Erik Green.

Green said the weather service has not been filled in too well during this week’s weather event by its current observers for Searcy.

“They are located at the water plant, so the observers are employees of the water plant and are probably a little busy at the moment so they couldn’t fill me in on all the data at the moment,” he said. “So some of these records may not be completely representative given the activity that just unfolded.”

“The period of record for Searcy is quite extensive. It goes back to 1892 to the present so a lot of these can be taken statistically meaningful.”

Green said the maximum seven-day snowfall record for Searcy is recorded at 17 inches at that end date was Jan. 16, 1918.

“For comparison for a local storm report we did issue, the two-storm total through the week from a social media was reported to be 11 inches. So the 11 inches is not quite close to the record of 17.”

The five-day maximum is “still only 15 inches” for Searcy, Green noted. “The end date for that was Feb. 22, 1921. The single-date maximum snowfall may tie this previous week depending on what our observer can fill us in on. It is currently 11 inches, so it is probably tied or just under or over and that date is Jan. 11, 1918.”

“As far as temperatures go, the single-day minimum temperature record for Searcy is currently listed as negative-20 and best as I can remember from earlier this week, I don’t think we got close to that up around Searcy,” Green said. “Again, that date was Jan. 12, 1918.”

The seven-day “minimum mean temperatures, the mean low temperatures through a week, is currently listed as 1.1 degrees and that end date is Jan. 18, 1918,” Green said. “A lot of these come from what looks like a prolific cold snap back in the early ‘20s.

“The five-day mean minimum temperature is negative-1.2 degrees Fahrenheit where the end date was Jan. 15, 1918.”

Green said he is curious to find out from the Searcy weather observer whether Searcy got closer to any of the above mentioned figures.

“I don’t know if if was that cold for that long up there [in Searcy] but it is probably up there and it maybe in the top 10 depending on how bad it was,” he said.

The two snowstorms registered as “a wow factor” at the National Weather Service, according to Green.

“If you look climatological for all of our official climate reporting stations, the normal snowfall here and there and not even every day is a tenth of an inch and so you have these days that you are reporting 7 to 8 inches of daily snow fall and you’re shattering daily snowfall records, it is definitely a wow factor,” he said. “And then when you look at a map of estimated storm totals snowfall and there is a swath anywhere from 15 to 20 inches across south-central Arkansas in late February, it’s definitely a wow factor. It is not a yearly thing for this part of the country.”

This year is a La Nina year, Green explained. “The general pattern is drier and warmer but it is also accompanied by extreme events. Here you go, we have had some pretty significant severe weather over parts of the far southeast and pretty much the entire part of the country has seen extremely anomalous cold and in some parts of the far southern parts, they are seeing anomalous snowfall that normally they wouldn’t be receiving.”

Green said La Nina “sets up when in the central-eastern Pacific there are colder that normal sea surface temperatures. So, you look off the coast over there in northwestern South America, right around the Panama area, and you go west along the equator, here are colder than normal sea surface temperatures. And it sets up a prevailing wind pattern that is more conducive for warmer and generally drier winters. It is also a pattern that if everything sets up in your favor, you can get extreme events.”

Green said that today and Sunday, Searcy will be looking at maximum temperatures “well over freezing” that should erase most of the evidence of this extreme event.

Searcy Mayor Kyle Osborne was back on his tractor Friday helping getting Searcy streets cleared off. In over 30 years of working for the city, Osborne said he has never seen snow events like this week’s storms. “Absolutely, never,” he said.

He said Arch Avenue “is terrible. A lot of the side streets that are getting a lot of use, the snow is packed, so it’s a 3-inch sheet of ice and there is very little we can do with that. We are able to salt and sand and grade and try to stay ahead of the city streets.”

In addition to Arch, Osborne said he also went out to the Lambert Terrace area to help get areas cleared off. “The ice is packed so hard,” he said. “At least I can get the snow off the road so the sun can melt the ice.”

Osborne said he can’t wait for “some 40-degree temperatures and sunshine.”

Because of the snow and ice, Osborne said the city kept its offices closed except for “essential personnel.”

“Anytime something this significant happens, it impacts the city,” he said, adding that he heard a lot about retailers having “trouble getting trucks into their businesses with stock.”

Searcy Fire Chief Brian Dunavan said in all of his years working for the fire department, it’s noteworthy that “as far as I know, this is the longest the city departments, other than police, fire and streets have been shut down. Streets have been out doing a good job clearing stuff. City Hall, I think has been closed for over a week now and I think that is the longest they have been shut down.”

“I think it appeared overall that most of our citizens took heed and prepared in advance for supplies, which is a real credit to our citizens,” Lincoln said.

“For the most part our citizens have been very understanding about the issues with roads. I am glad the sun is out and am glad that maybe by Monday the snow will be off of our roads. Our guys have been out working. We are trying to open up the main thoroughfares, the roads that connect highways. We can’t get off on the side roads.”

Lincoln said he was talking to Osborne and they agreed that you try to prepare the best you can, “but for something like this, there really is no preparation.”

In all his years in the county, Lincoln said he can’t remember a similar winter weather event. “I think maybe back in the late ‘80s we had a similar situation, but this is an event that happens every 10 to 15 years.”

Dunavan said although there have been several vehicle accidents, it hasn’t really been more than normal.

“Today [Friday afternoon], I think we have had more accidents than anything, cars off to where we have had to help them get out,” he said. “It has not been real bad [overall].People pretty much stayed at home for the most part.

Asked about the trouble spots in town, Dunavan said the main thoroughfares, like Booth Road and Benton Street, have been the worst parts, “where they meet.” He said Race Avenue, Beebe-Capps Expressway and Main Street were pretty well clear” Friday.

White County Sheriff Phillip Miller said, “We kind of really got a 1-2-3 punch between ice and two rounds of snow back to back, so we are seeing some historic and record-setting snowfall amounts.”

“The call volume has just been unbelievable. The majority of our calls have to do with road conditions or vehicles that are stranded in the roadway, but we are still getting the same calls for non-traffic-related incidents, domestic violence calls, that sort of thing.”

Miller said keeping the roads cleared has been a challenge. Miller said Holmes Road, Fairview Road and Main Street north of the Arkansas Highway 13 bypass always stand out as pretty significant roads that are challenges during weather times like this. Blue Hole Road, between McRae and Beebe. in the county was another troublesome road that Miller brought up.

Even as the roads thaw and with crews trying to clear them, Miller said there are still going to be areas that have patches of ice and snow on them.

“Just because the road is clear in one spot, doesn’t mean you can drive like normal,” he said. “Always be looking ahead for those shaded areas that have remaining ice and snow on them.”

All of the officers have vehicles that are four-wheel drive or all-wheel drive and go through a defensive driving course, Miller said they also do an emergency operations course.

“When we have inclement weather like this, slow down and navigate well,” he said. “I think as many calls as we have responded to in the past seven days, I think the deputies have done a great job of responding without putting anyone in danger. Even through the inclement weather, deputies are making it in to work. We are still out there 24-7.”

Flave Carpenter, a spokesman for Entergy in the Searcy area, said mostly there were relatively few outages this week and there weren’t any more “rolling blackouts” after ones earlier in the week with about 4,300 customers affected for a time.

“From our perspective, our customers did an excellent job of complying with our plea for conservation, so that lowered the risk for any type of rolling blackout,” Carpenter said. “It was a relatively calm event outside of a few extenuating circumstances.