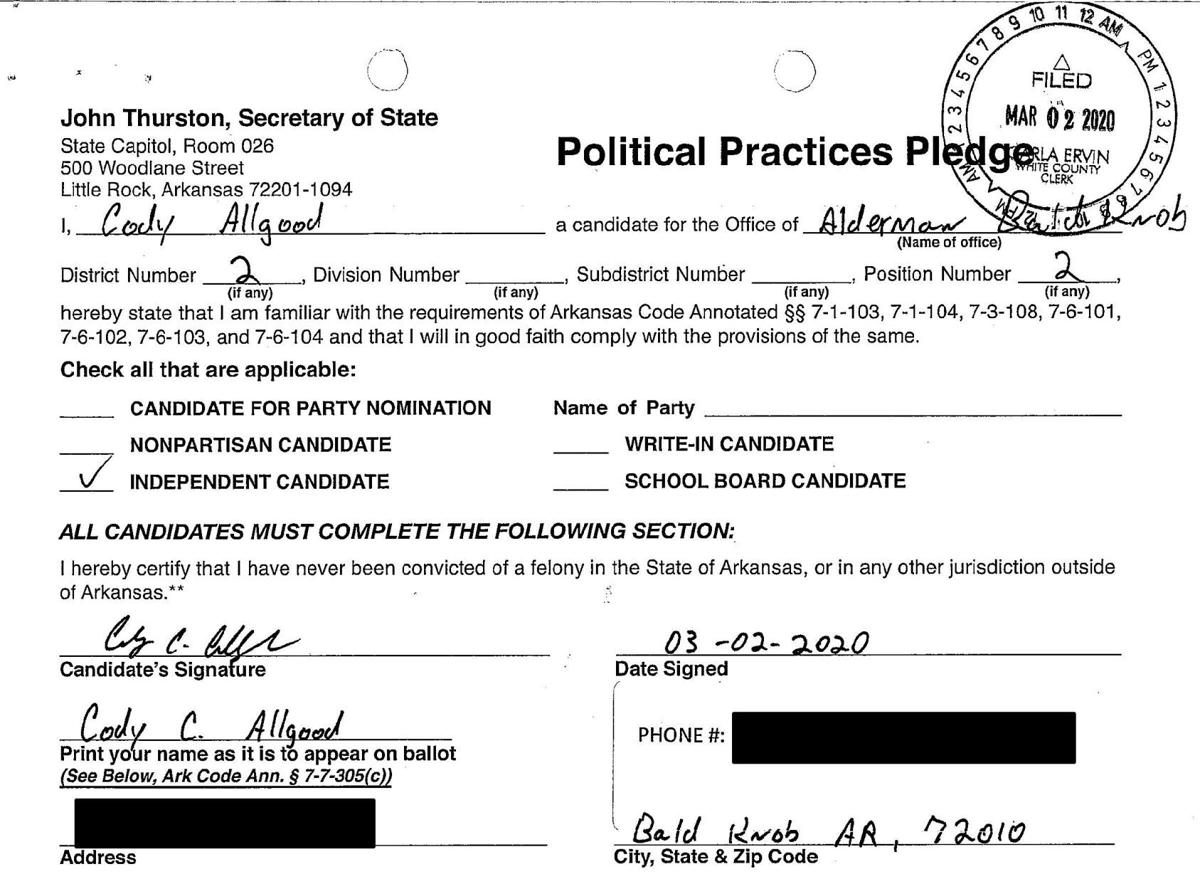 The filing document of Cody Allgood that was filed with the White County Clerk's Office for the wrong seat, Bald Knob Ward 2, Position 2, the last hour of the deadline, which was noon March 2. 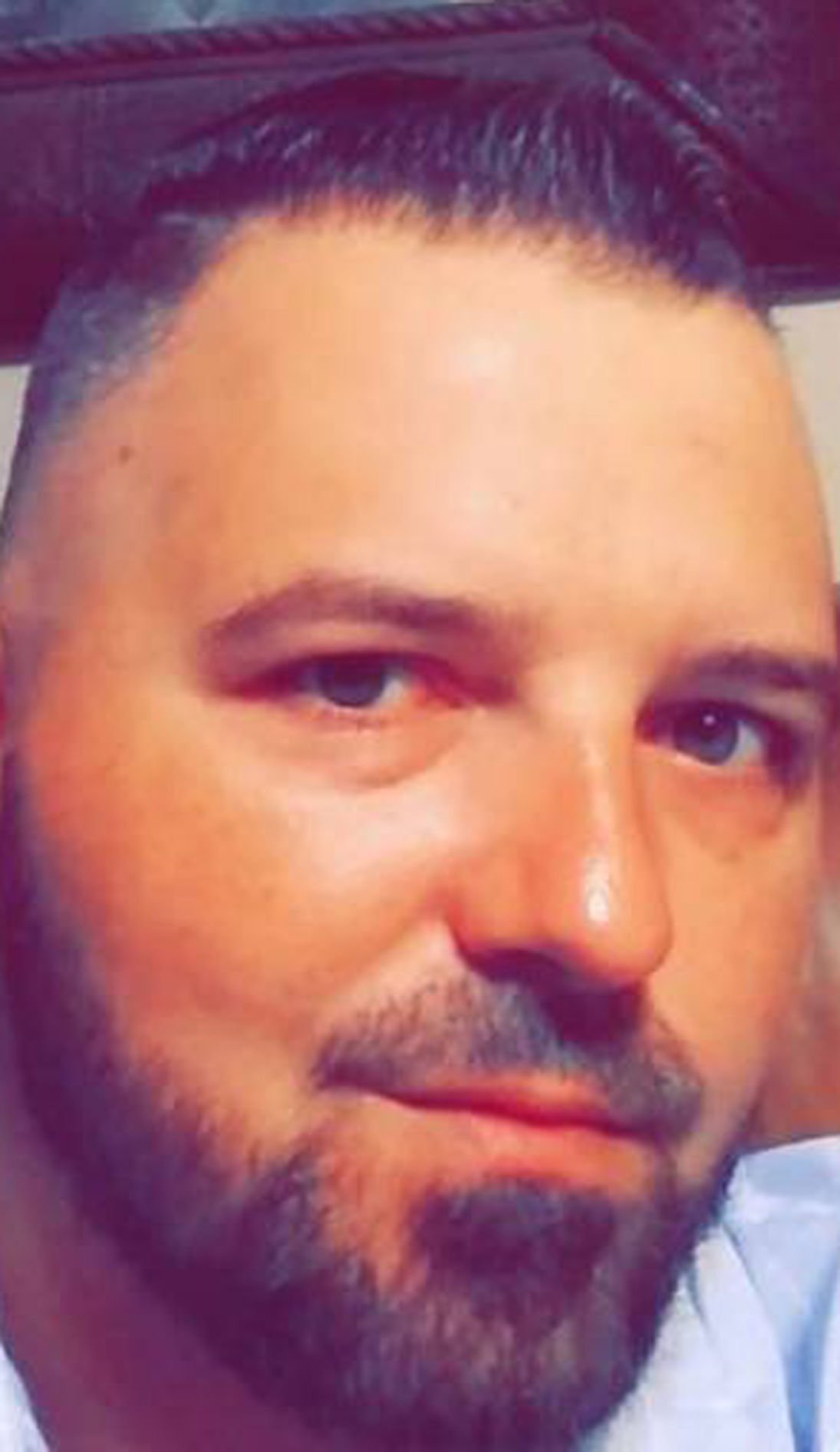 The Arkansas Board of Election Commissioners has received multiple calls concerning a Bald Knob City Council candidate filing for the wrong position, but there’s nothing that can be legally done to change it now, according to election officials.

There are four candidates on the ballot running in the Nov. 3 general election for the Ward 2, Position 2 seat held by Vince Vire, who chose not to run for re-election. The candidates are Ella White, Tammy Pitcher McConnell, David Lowrey and Cody Allgood. Meanwhile, the official ballot has David Smith running unopposed for his Ward 2, Position 1 seat. However, Allgood apparently was supposed to be running against Smith.

“Mr. Allgood said he was signed up to run against me,” Smith said. “When it comes down to it, I guess they are all four on the same ward and I am on one by myself. I’m in a ward by myself so I’m running unopposed. People signed up and once it’s notarized it’s done.”

Smith noted that he called the White County Clerk’s Office to verify that all four candidates were running for the other position.

Bald Knob resident Nancy Hutchison, a former member of the city’s planning commission, agreed and said in an email that it “could be easily corrected.”

“Up to this point since the ballots have already been printed, there has been no indication that the error is going to be corrected and reprinted only for Bald Knob voters,” Hutchinson wrote. ... “This has created bedlam, turmoil, and the candidates and voters are outraged.

“This mistake must be corrected and reprinted and a public statement published that it has been corrected so this situation will not get any worse than it currently is. Whether it was an honest mistake or not, this situation must be resolved with a correction and the ballots printed in the manner whereby the candidates are correctly in place for their desired positions.”

Lynn Soldia, who said he lives just outside Bald Knob, is heavily invested in the community and has served about 33 years as a Bald Knob volunteer firefighter, said the candidates are all frustrated because nothing is being done about the ballot situation.

“I think this is a political hat trick that somebody has pulled and I think they are going to get away with it if it doesn’t get brought to light,” Soldia said. “Maybe by December or January they might get something worked out. That is the thing that is frustrating, that’s just the way the government works.

“What needs to happen is that there needs to be some public awareness made of this and they need to know the county screwed up and they are not doing to get to vote on their choice.”

White County Clerk Carla Ervin and Chief Deputy Kim Meharg said legally they cannot change the ballot since it already has been drawn. They provided a filing document that showed Allgood had filed for District 2, Position 2 on March 2, and said he filed within the last hour of the filing period.

They also referred The Daily Citizen to the director for the state Board of Election Commissioners, Daniel Schultz.

Schultz confirmed that he was aware that there was an inquiry to his office about if a candidate’s position could be changed after the filing deadline and he said “it cannot.”

“The candidate selects the position they want to fill obviously; they select the office and part of that is the position, and the statute is real clear that it’s part of it. The clerk takes whatever they [the candidate] wrote down. The clerk doesn’t have anything else to do with it. To the extent I understand it, there’s no allegations of any wrongdoing whatsoever. The clerk simply accepts what they are given and once the deadline passes that can’t be changed.”

Who: Cody Algood, who filed for Ward 2, Position 2, which has four candidates, instead of Position 1, where incumbent David Smith has no challengers

Why: Filing period has ended and ballot has been drawn