If you need to purchase a subscription.
You are the owner of this article.
Edit Article Add New Article
You have permission to edit this article.
Edit
Home
News
Sports
Business
Community
Announcements
Obituaries
Opinion
Multimedia
Classifieds
Share This
1 of 13 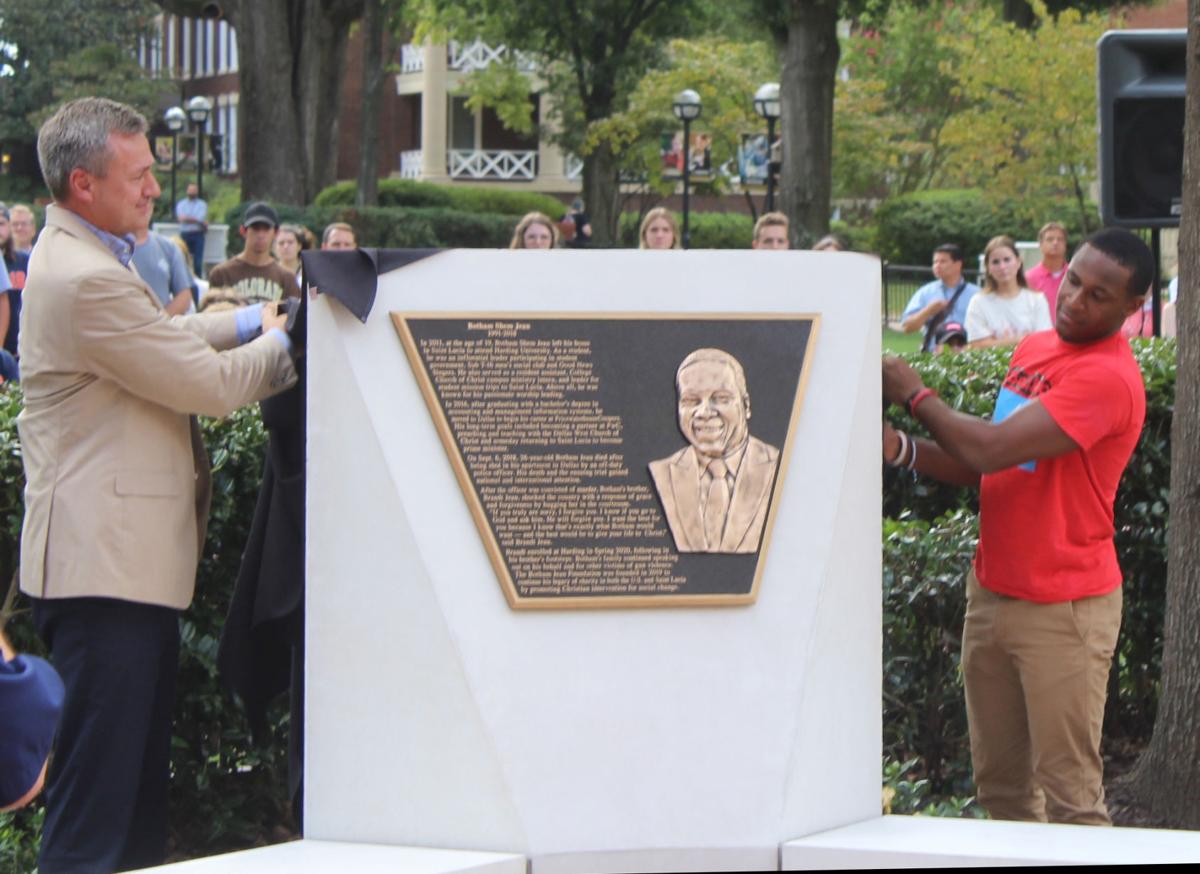 Harding University Executive Vice President Dr. David Collins (left) and Brandt Jean, the brother of Harding graduate Botham, unveil the Botham Jean Memorial on Wednesday. Botham Jean, who graduated in 2016, was killed in 2018 in his Dallas apartment by an off-duty police officer. Brandt Jean is a student at the university. 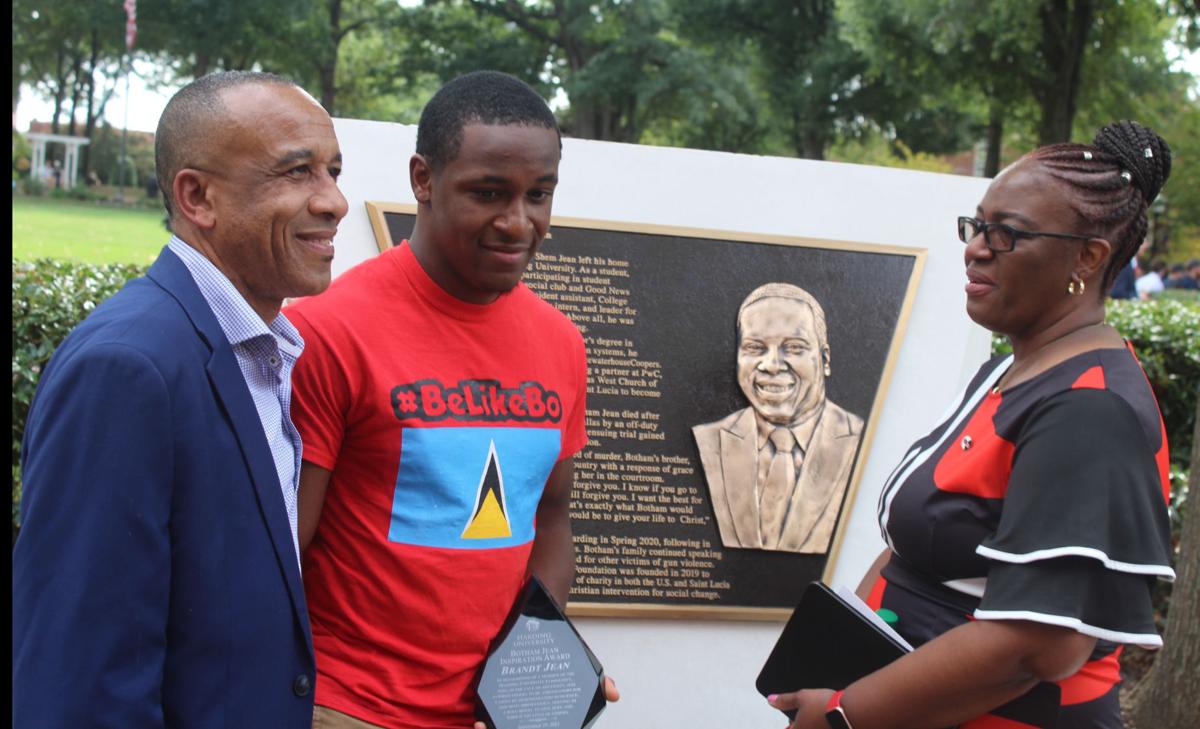 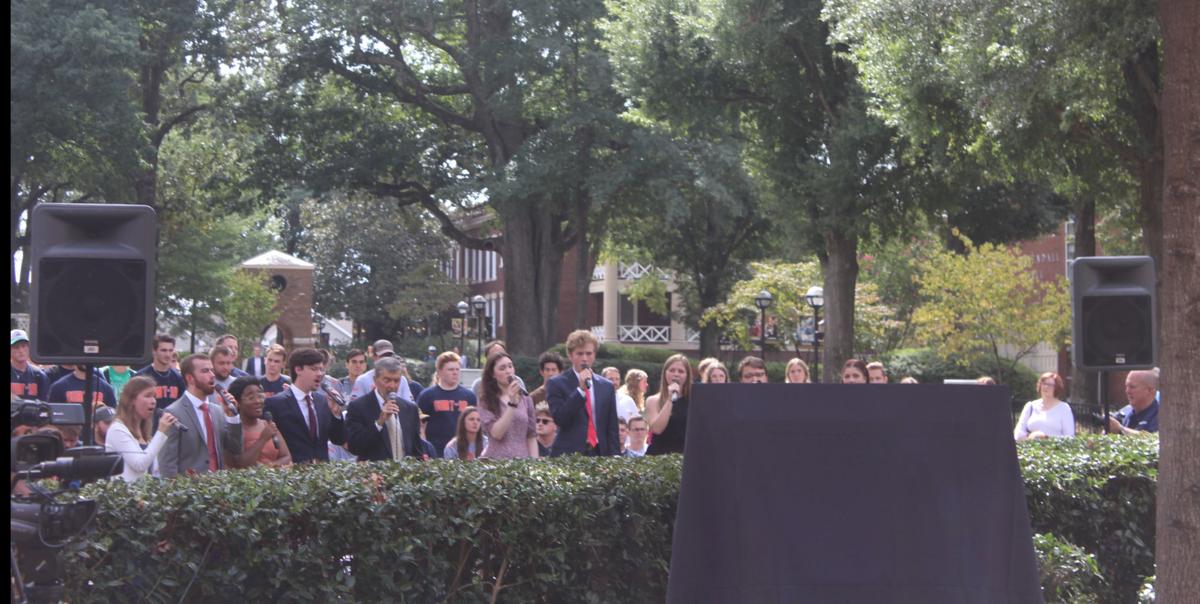 The Good News Singers, directed by Chuck Hicks, at Harding University on Wednesday. 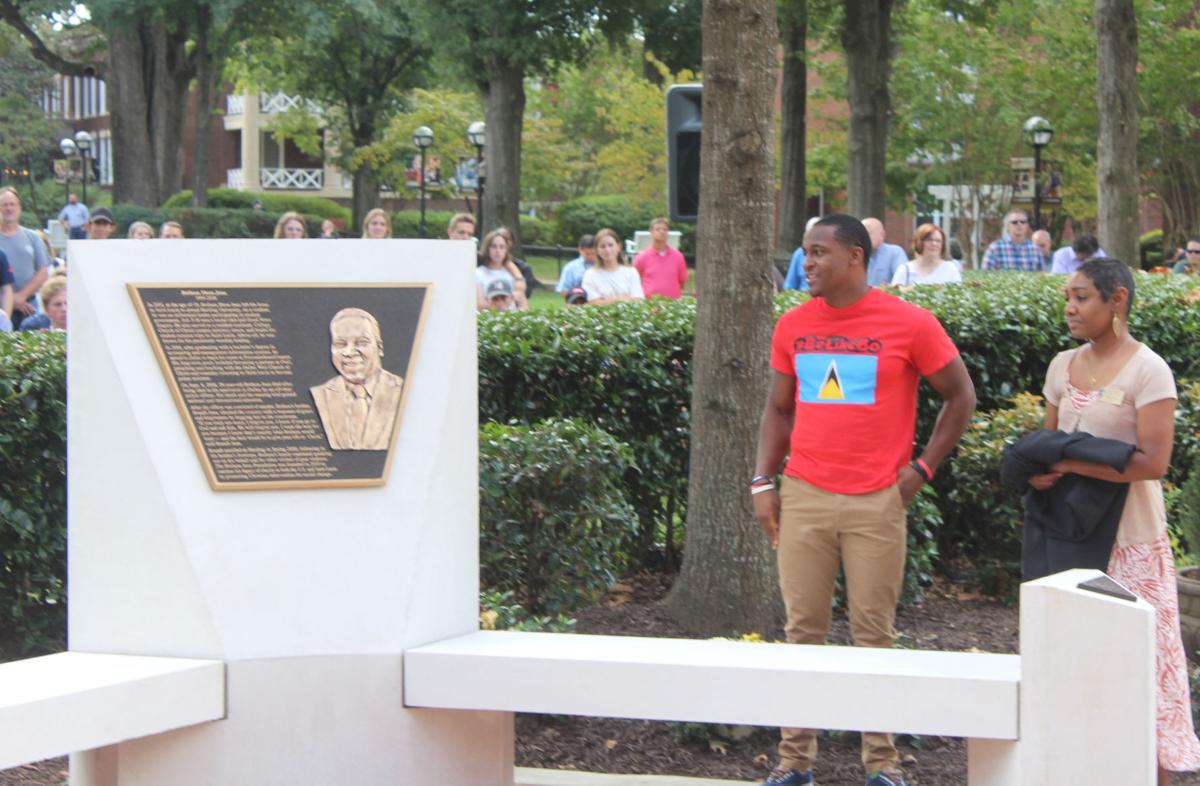 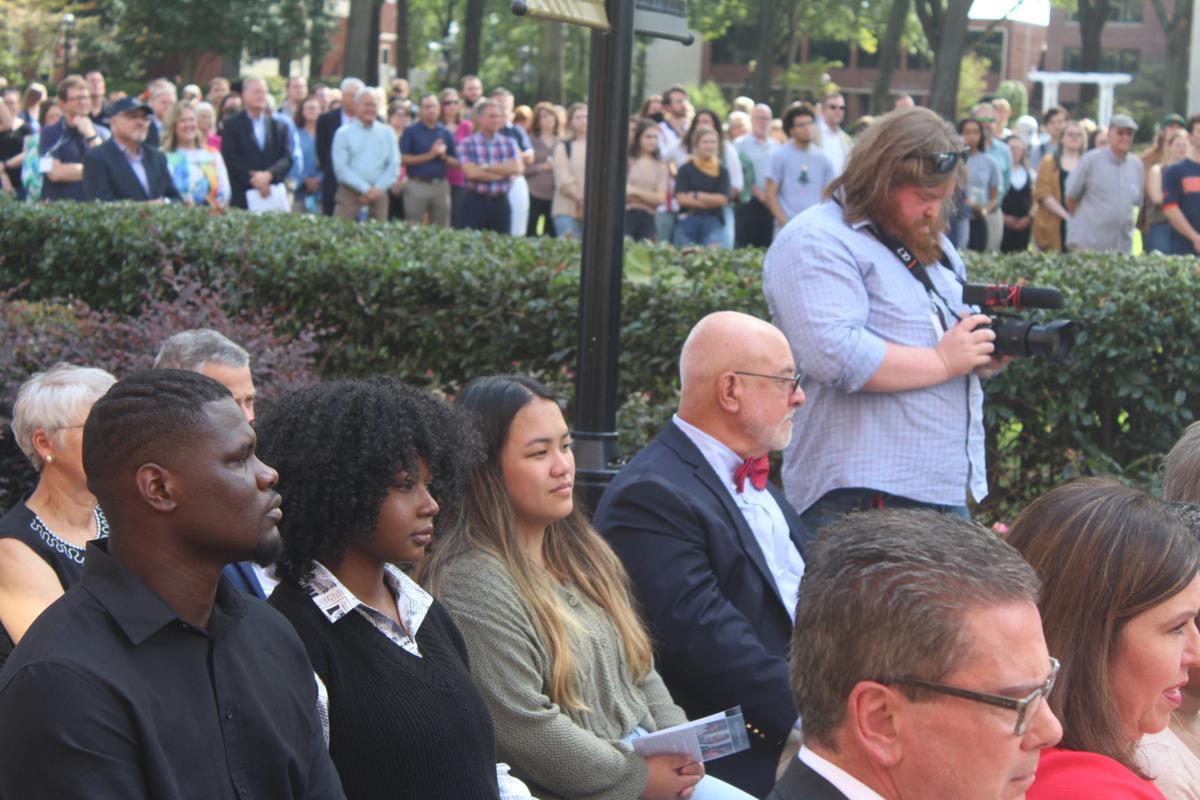 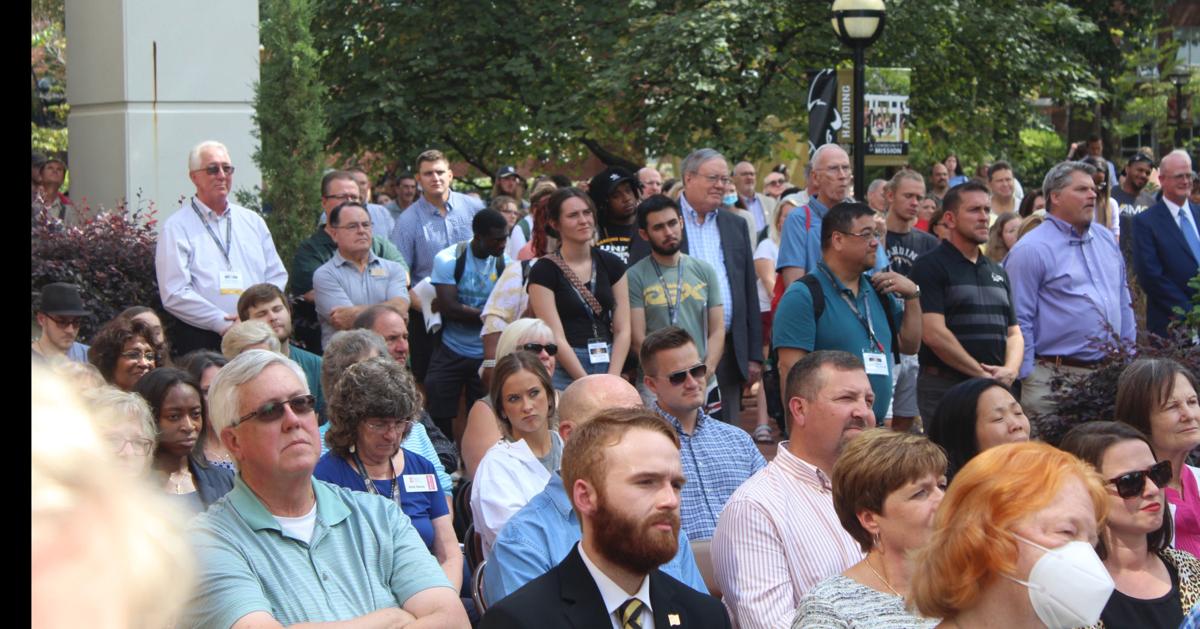 Members of the Harding University community listen at the dedication ceremony for the Botham Jeam Memorial on Wednesday afternoon. 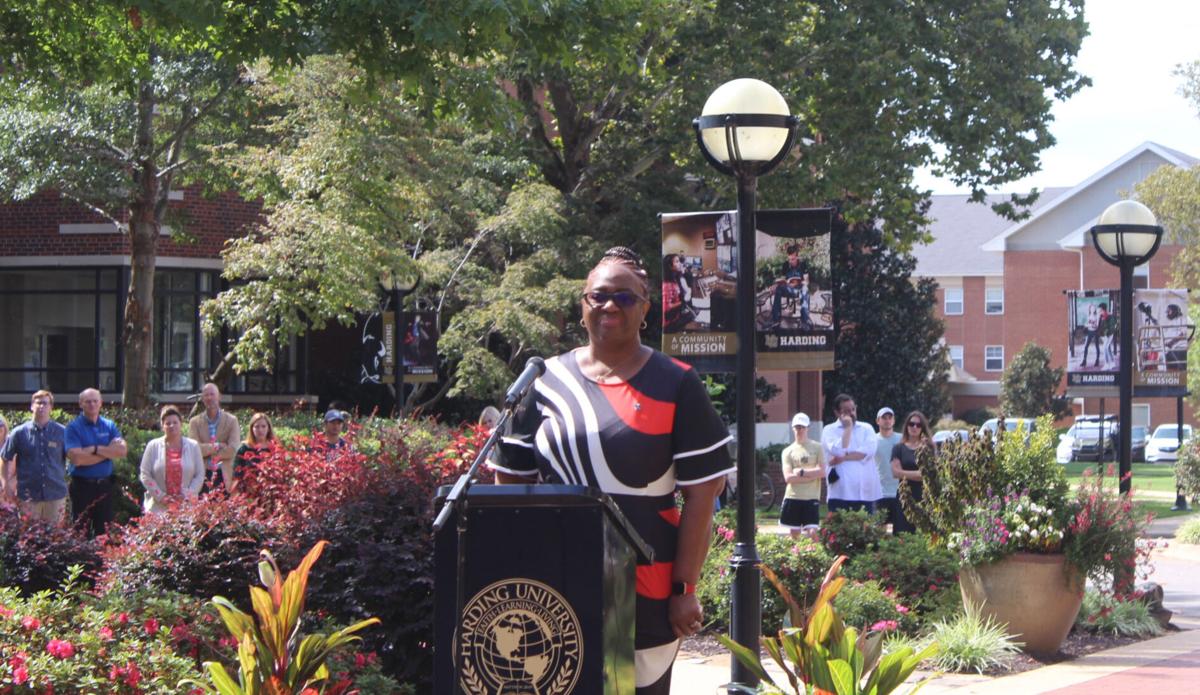 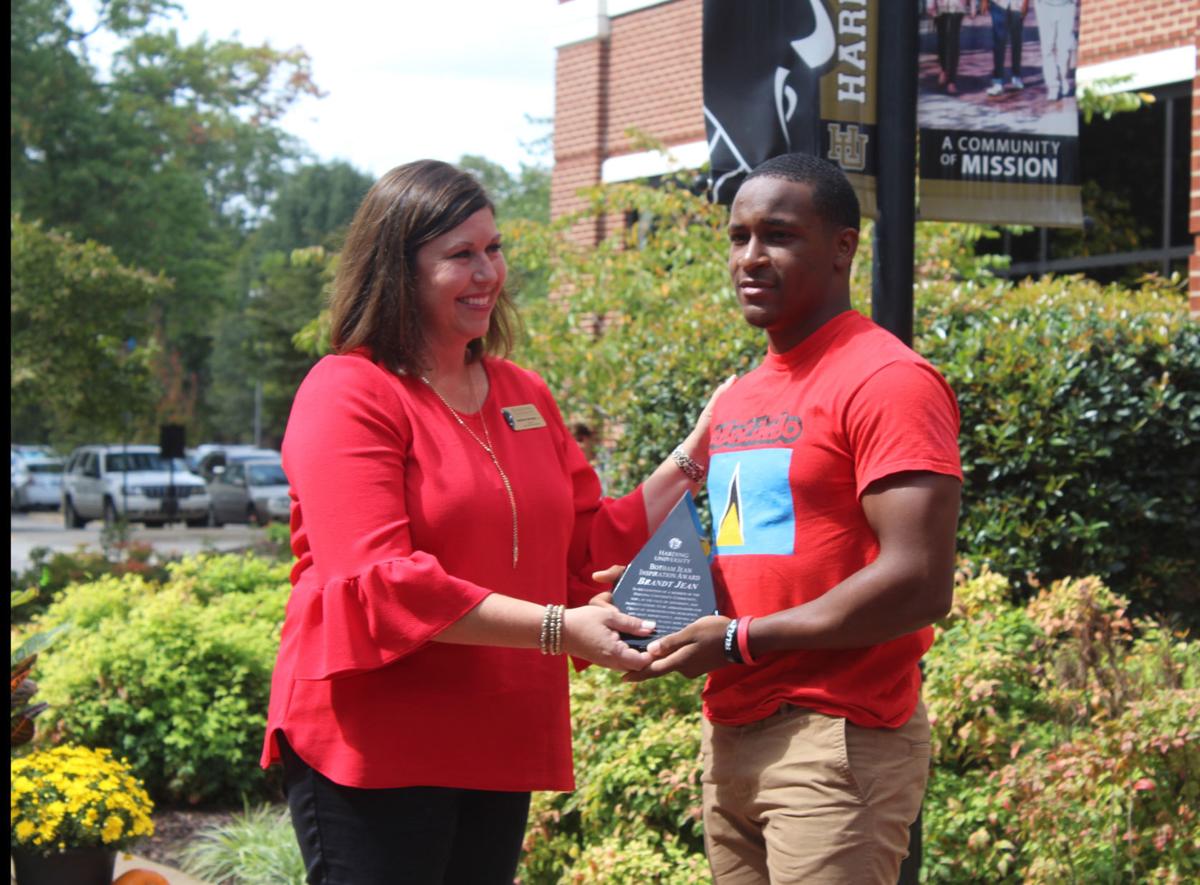 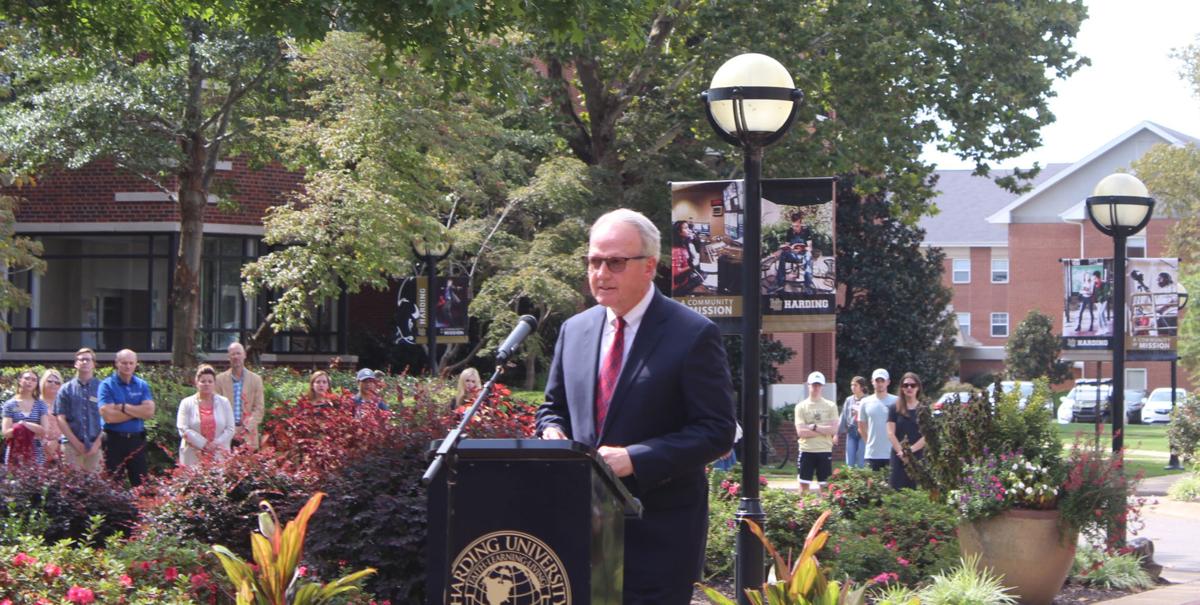 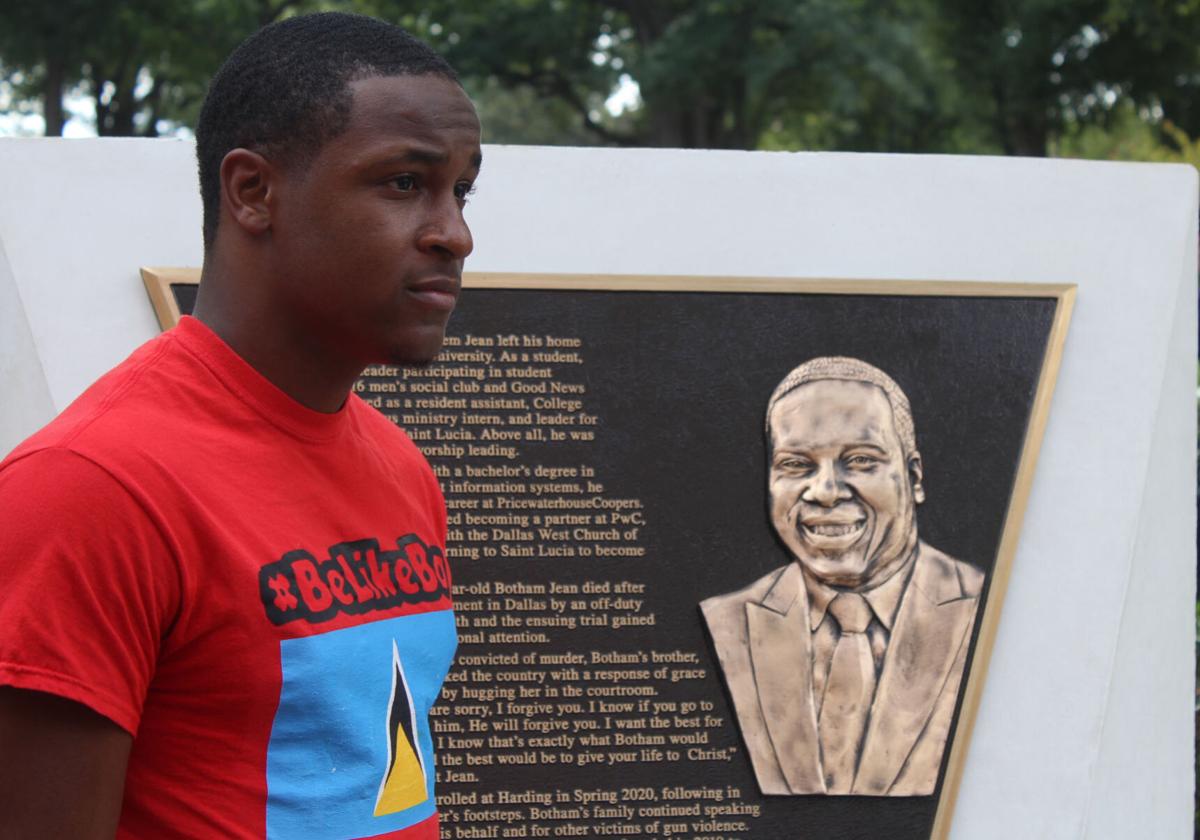 Brandt Jean, 20, the brother of Botham Jean, stands close to his brother's memorial after it was unveiled Wednesday. 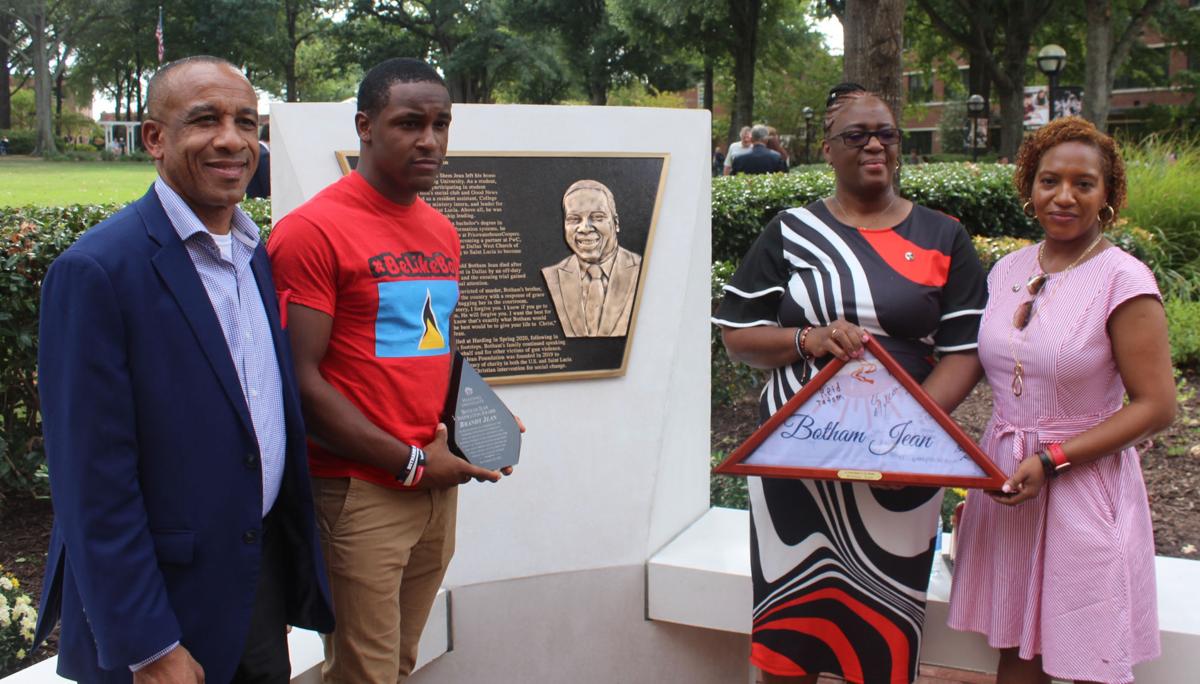 The family of Botham Jean after the Wednesday afternoon memorial dedication at Harding University. 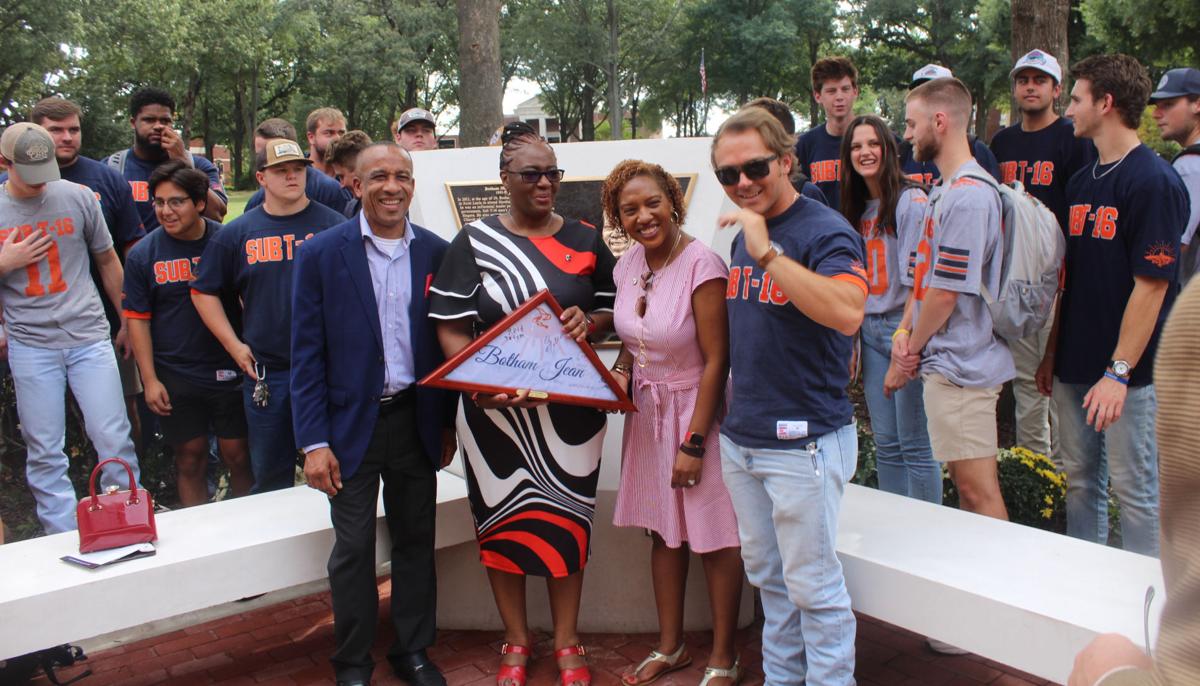 Harding University Executive Vice President Dr. David Collins (left) and Brandt Jean, the brother of Harding graduate Botham, unveil the Botham Jean Memorial on Wednesday. Botham Jean, who graduated in 2016, was killed in 2018 in his Dallas apartment by an off-duty police officer. Brandt Jean is a student at the university.

The Good News Singers, directed by Chuck Hicks, at Harding University on Wednesday.

Members of the Harding University community listen at the dedication ceremony for the Botham Jeam Memorial on Wednesday afternoon.

Brandt Jean, 20, the brother of Botham Jean, stands close to his brother's memorial after it was unveiled Wednesday.

The family of Botham Jean after the Wednesday afternoon memorial dedication at Harding University.

Harding University sophomore Brandt Jean helped pull the covering off a memorial to his brother Wednesday, then looked at it several times while standing off to the side and smiling. “It makes us feel good that Botham is appreciated as much as this,” the 20-year-old said.

Botham Shem Jean was honored on what would have been his 30th birthday. The 2016 Harding graduate died after being shot in his Dallas apartment on Sept, 6, 2018, by an off-duty police officer, Amber Guyger, who is currently serving a 10-year sentence for his murder.. The university unveiled the memorial bearing his image in front of the David B. Burks American Heritage Building.

“I think it’s significant – and, of course, it was intentional that we planned it for today – that today would have been Botham’s 30th birthday, Sept. 29th, 2021,” acting Harding President Dr. David Burks said after welcoming Botham’s family members and everyone who attended the unveiling. “All of us have many memories of his time, but especially with the family, we have very special memories of his life.”

Burks reminded everyone that Botham was from the Caribbean island Saint Lucia. “Harding has chosen to remember and honor his life in three ways, specifically through the establishments of scholarships in his honor given to people who will receive them annually. Two scholarships were established in 2019 and are given in honor of Botham.”

The Botham Jean Memorial, Burks said, was created by Botham’s parents, Bertrum and Allison Jean, and is given to students who have lived in the Caribbean and that fund is now at $400,000. A second scholarship was created and established by the Paul R. Carter College of Business in cooperation with Botham’s Dallas employer, PricewaterhouseCoopers in Dallas. That one is now at $900,000, according to Burks. He called that amount “very significant.”

All four of the scholarship recipients so far were present and recognized by Burks. They are R.J. Darote, Brittany Tate, Trisha Magadu and Trinity Bolden.

Another way of honoring Botham is with the Botham Jean Inspiration Award. Burks said it will be given annually to keep his memory alive. It was presented Wednesday to his brother, who is studying civil engineering and project management.

The third way of remembering Botham, Burks said, is with the memorial plaque with his image.

Burks then introduced Botham’s mom and dad, his sister, Alissa Finley, and his brother Brandt Jean. They all stood and received a round of applause.

Burks said Botham’s death was “truly a tragedy and we continue to pray and grieve alongside all those who knew and loved him.” With the image now in place on campus, Burks said Botham can be remembered for generations to come.

The image shows a bust of Botham and “his legendary smile,” Burks said.

Botham also was a member of the Good News Singers, who performed at the ceremony. Burks said he remembers Botham’s song leading and his enthusiasm and passion for Christ that along with his smile, Burks said, was simply contagious in everything that he was doing. “He built relationships as he followed the example of Jesus Christ in everyday life.”

Brandt said his brother “fell in love with chapel in his freshman and sophomore year. He fell in love with the singing, not just chapel but going to different congregations all over Searcy, just representing Harding. I think he just really loved that. He just loved everybody.”

The back cover of the program for the event included two quotes about Botham. The first from minister Sammie Berry said, “His love for people, his love for all people, is going to continue here even after he’s gone.” The second one from friend Alexis Sheets Stossel said, “A friend is the family you chose. And let me tell you, Botham chose everyone.”

College Church of Christ Campus Minister Todd Gentry, who also was a good friend of Botham’s, said since Botham’s death a slogan has come out, “Be Like Bo.” He said the slogan is “so great because Botham loved Jesus.” Gentry said Botham made a difference in people’s lives.

“Almost every day,” he said, Botham came through the doors of his office and said, “‘What leftovers do we have?’ That’s who he was. This [the building that houses the university’s cafeteria] is the most fitting place for this memorial because Botham loved to eat and this was one of his favorite places.”

Allison Jean thanked everyone, including those who traveled from far away, for coming to the memorial’s unveiling. She recalled that her son “was sold on Harding, and nothing could change his mind,” after he met privately with the late Dr. Clifton Ganus in 2010 at the Caribbean lectureship series to find out about the university.

“We visited the campus in April 2011 and as soon as we got here, Botham left me sitting by the fountain and moved all around here as if he knew this place,” Allison Jean said. “The excitement in his eyes told me that I couldn’t disappoint him.

“Fast-forward to 2018, I had no regrets. Botham received his sound academic education, exciting social life, inspiring spiritual grounding and gained wonderful family and friends. He was thrilled about Bisons for Christ, SUB T-16 and Good News Singers and just like Dr. Ganus, he, too, became the Harding ambassador.”

When Brandt Jean was presented with the Botham Jean Inspiration Award, Burks said typically it will be awarded as part of the homecoming activities, but since so many family and friends were present, Brandt was receiving the honor Wednesday.

With emotion in his voice, he said Brandt made a worldwide impact when he embodied true forgiveness in a Dallas courtroom “and inspired millions of others.” When Guyger received her sentence for killing Botham in October 2019, Brandt asked the judge if he could hug Guyger. He did for nearly a minute and told her, “If you truly are sorry, I forgive you. I know if you go to God, He will forgive you. I want the best for you because I know that’s exactly what Botham would want – and the best would be to give your life to Christ.”

Guyger had said she went to the wrong apartment, mistaking it for her own, before the shooting after a long shift. She said she believed that Botham was an intruder.

Brandt told CNN in 2019 that he was angry over his brother’s death and “pretty much ... hated her,” but his attitude changed when he heard her apologize and he chose to forgive her, telling Guyger that he didn’t want her to go prison.

Brandt said his brother’s death and the trial “forced me to improve my humility and freed me from anxiety.” Now, he has a daily reminder of his brother’s life, the Botham Shem Jean Memorial, on campus with him.