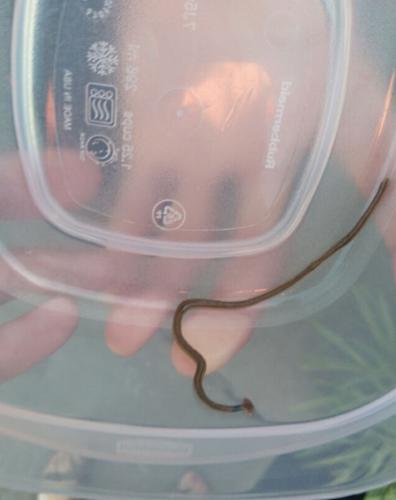 This hammerhead worm found by Flint Coleman, 9, of Searcy is the first one known to have been found in White County. The invasive Asian species has been reported in Arkansas for at least 10 years and confirmed in 10 counties. 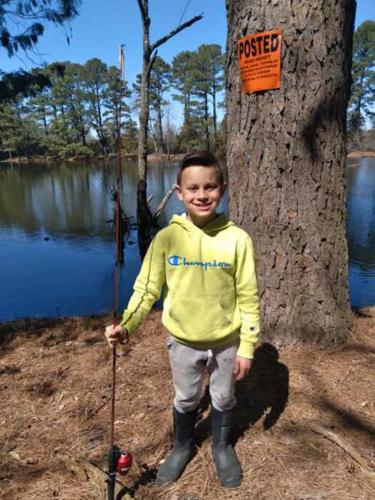 Flint Coleman, who will be a Southwest Middle School fourth-grader in the fall, found a hammerhead worm on the walkway in front of his family’s home in Searcy.

This hammerhead worm found by Flint Coleman, 9, of Searcy is the first one known to have been found in White County. The invasive Asian species has been reported in Arkansas for at least 10 years and confirmed in 10 counties.

Flint Coleman, who will be a Southwest Middle School fourth-grader in the fall, found a hammerhead worm on the walkway in front of his family’s home in Searcy.

A 9-year-old has an interesting story to share with his teachers and classmates when school returns, and bad news for White County residents, after becoming the first resident known to have found an invasive Asian worm species in the county.

“I was a little scared at first because I didn’t know what it was,” said Flint Coleman, who will be a fourth-grader at Southwest Middle School this fall. “I put it into a container so it wouldn’t get away, but it ended up getting away.”

Flint and his mom, Amy Coleman, got photos of the worm before it escaped, though, and it has been identified as a hammerhead worm.

Amy Coleman said she had heard of hammerhead worms “and I looked at the interactive map and it doesn’t say that we [White County] have had any that were identified.” She said she told White County Cooperative Extension Service agent-agriculture Sherri Sanders that it was her opinion that Flint was the first person to find the worm in the county, “so she was excited.”

Sanders confirmed that to her knowledge, it is the first hammerhead worm found in the county.

Flint said he found the worm a week and a half ago because he is always looking for bugs. Although he finds them on two trees in his backyard “a lot,” the worm was on “kind of like a sidewalk in my yard, from my front door to my driveway. I found it there on the concrete.”

Amy Coleman said she was in the house when Flint informed her of his find. “He likes all things creepy-crawly. He watches the YouTube channel with the people who let bugs crawl on them. He loves it. So he saw an unusual worm he had never laid eyes on before in our front yard.”

“We have a well-maintained yard. We pay a service to spray for us so you know it’s not like grown up and crazy by any means, and he hollered at me to come see the worm,” she said. “He already collected it in a container by the time I got out there. He was like, ‘Look at this. I have never seen a worm like this.’”

She said she wasn’t really paying much attention to it, but he asked her to take photos of it “so I grabbed my phone just to appease him and took a few photos. And I said, ‘Ones like that don’t belong in the house.’”

She described as “a long, skinny, stringy worm and its head was like a flat suction cup. It was bizarre-looking.”

She said while she still wasn’t paying much attention to it after taking the photo, her husband asked her why she had a picture of a hammerhead worm on her phone. “We started googling and I said, ‘I think that’s what it is!’ And everything I came up to said, ‘If you find one, contact your extension service,’ and that’s what I did.”

“What I have learned since is that researchers knew that they were in Arkansas, however, very few have been reported,” Amy Coleman said. “... I think they got here when Asia sells us plants and things – it was in their dirt – and they love humidity. They eat earthworms, all of the good worms. They are hermaphrodites so they mate indiscriminately, and if you cut them in half, that makes two worms.”

Sanders said that “it’s kind of a weird, kind of a creepy thing” that ”if you cut them in two, they just grow back. It doesn’t kill them.”

“You have to kill them in like a bag of salt water and let them drown and just throw them away because it won’t work if you cut them in two like you think it would an earthworm or something,” Sanders said. “Kind of a freaky thing.”

Hammerhead worms have become invasive worldwide and have been reported in Arkansas for at least 10 years, according to an extension service article provided by Sanders. Jon Zawislak, extension apiarist for the University of Arkansas System Division of Agriculture, said in the article that hammerhead worms tend to prefer climates like those found in Arkansas. They have been confirmed in at least 10 counties.

“These flatworms prefer warm climates and feel right at home in the southeastern United States,” Zawislak said. “Gardeners have become more aware of these worms because of photos and stories on social media and are now more alert and concerned about their presence here.”

He confirmed in the article that the worms possibly were “accidentally transported in soil through the global horticultural trade.”

“Hammerhead worms do have the potential to upset the ecosystem by preying on beneficial worms as well as slugs and snails but since they are so cannibalistic, they may prove to be their own worst enemies,” Zawislak said.

They also can be at least slightly harmful to humans and pets, he said.

“Many species of hammerhead worms contain a potent neurotoxin called tetrodotoxin, which they use to immobilize their prey and defend against predators,” Zawislak said. “This is the same toxin found in pufferfish and a few other animals. When they secrete this substance, it can irritate your skin if handled, and will sicken pets if eaten. As a precaution, gardeners should never handle these worms without gloves.”