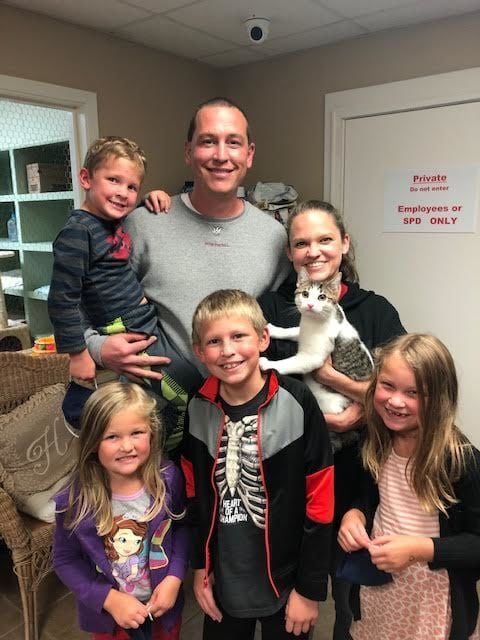 A family poses with the cat they adopted from the Humane Society of Searcy. The organization uses social media heavily to help promote the adoption of cats and dogs. 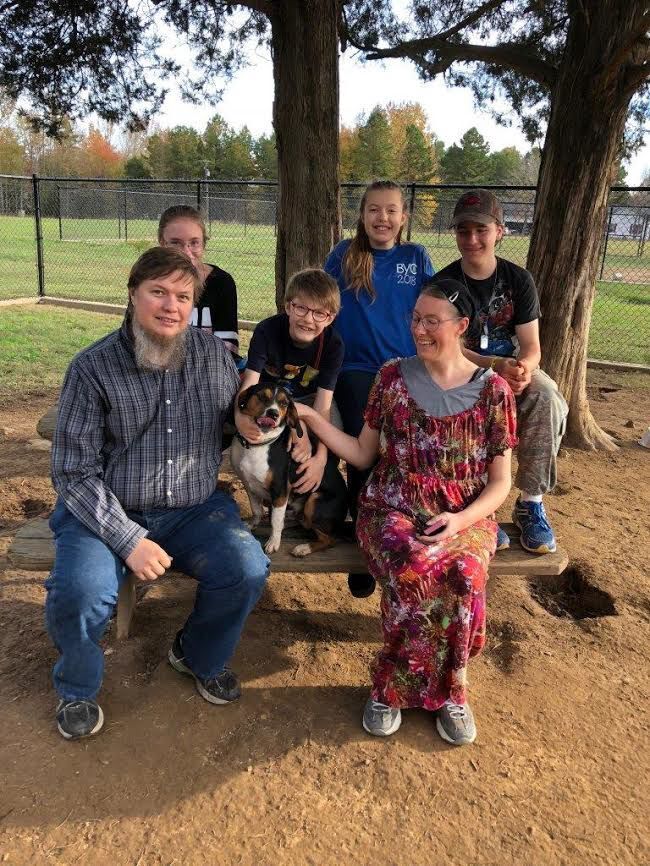 A family poses with the dog it adopted from the Humane Society of Searcy. Despite COVID-19, adoptions are continuing with an application process. The adoption cost for a dog or cat is $75 and includes spaying and neutering.

A family poses with the cat they adopted from the Humane Society of Searcy. The organization uses social media heavily to help promote the adoption of cats and dogs.

A family poses with the dog it adopted from the Humane Society of Searcy. Despite COVID-19, adoptions are continuing with an application process. The adoption cost for a dog or cat is $75 and includes spaying and neutering.

Because of COVID-19, the Humane Society of Searcy has had to “radically change up how they are doing things because they have always operated as a walk-in shelter where people can look around and check animals out,” according to Treasurer Chuck Niementowski.

After a meeting was held with the board of directors and the veterinarians, the adoption and visit procedure was modified to a method that many other shelters are using during the pandemic, Niementowski said.

“First, they have to send an application in and we check some stuff out, confirm vetting and then approve it and then they can come in,” he said. “The purpose of all that was so we could reduce just the public flow of people, and that was for two reasons: One, to be more careful and protect everybody against COVID, and the second reason, which is probably the most important for us, is that we can’t let our employees get COVID. If they get sick, who’s going to take care of the animals? It’s not something just everybody can do.”

When visitors go out in the yard to play with the dogs, they are allowed to take their masks off because some dogs get intimidated by the masks, Niementowski said. “They can’t figure that out.”

During the course of the year, the Humane Society of Searcy has 1,186 animals brought in, according to Niementowski. Around 850 adoptions are made and almost 300 “return to owners.”

“What return to owners means is that when we get an animal in, we keep it at the shelter in quarantine for five days and that time allows us to get the vetting started to check them out,” he said. “But it is primarily to keep them there so if someone has lost a dog or cat, it gives them five days to contact the shelter and then we find out if they are there or not and then they can come pick them up. Per city ordinance there is always a five-day holding period.”

When asked if dogs or cats were more popular for adoptions, Niementowski said “certainly it depends on the day, but then we get to the averages, they are pretty close to even. Dogs are maybe 55 percent of the total of adoptions. On cats, we don’t require a full application but we do on dogs.

“Our adoption fee is the lowest in the state or close to the lowest in the state. It is certainly one of the cheaper in the state. It’s 75 dollars and that includes spay and neuter,” he said. “If they are puppies or kittens, when they are of age, it includes them bringing them back to the shelter for one of our surgery days because we have local volunteering vets come in one day a week and do spay and neuters. We have a nice full surgery in the shelter where that is done.”

As far as marketing for adoptions of the pets, Niementowski said the shelter has six pictures for each dog and a varying number of pictures for the cats. “It seems to be more important to have more views of the dogs.”

The Humane Society of Searcy, he said, uses the ‘romance of the write-up” when describing pets up for adoption on social media such as Facebook and Petfinder.

“Right now, we have a young lady who works for us part time but she also volunteers and is a veterinary student,” Niementowski said. “She does those write-ups and rather than just being dry, she does a romance with the write -ups.

“We have done some videos so people can see them [the animals] in action. There was one that was really popular when we had a bunch of puppies and they laid outfits out and the puppies picked out their own outfit and people really loved that. We had the puppies running around and whichever outfit they grabbed was theirs to wear.”

Another thing the Humane Society of Searcy likes to do is characterize the dog by their behavior, traits and disposition.

“All the dogs are different just like people,” Niementowski said. “They have different personalities, different energy levels and all that. We work real hard to match people up with a dog. We want these adoptions to stick. If we know dogs have certain traits that might not work out with the people. We try to tell them that and navigate them to want we think are better matches. We are more careful when we adopt puppies out and there’s toddlers because that often ends up being a problem. It’s not the kid, it’s the parents.”

Usually Christmas season is busy for adoptions but this December it didn’t play out that way.

“In most years, going back December is one of our higher adoption months, but last December it was just an average December,” Niementowski said. “I also have to say our inventory is low at this moment.

“Every year when you come to December, January, February, the inventory goes way down on cats because cats are seasonal. We will get real low on cats in the dead of winter and when spring or summer hits, we got about 75 cats and kittens. It’s crazy. At some point, we run out of space on cats but we try to keep up with that. We used to have an issue with dogs, but we just added another outside kennel system so our capacity is greatly increased.”

Flow is something that cannot be predicted, “We may not get a dog in for two days and the next two days we get 15 in,” Niementowski said.

When it comes to people returning dogs after adopting them, he said the animals are brought back “for the stupidest reasons.”

“The puppy was stealing the toddler’s toys and it made him anxious,” Niementowski said. “The kid is freaking out because the puppy is stealing toys from the kid. Well, how do they expect that puppy to know the difference between his toy and their toy?’ The puppy is going to bite and chew. It’s going to play. It’s just being a puppy. If a kid gets scratched or bit, they freak out and the world is going to end.”

Niementowski said rescue groups in Connecticut are sent some of the dogs.

“All rescues and shelters need to have a good social media program or they just aren’t going to do as well. We have what we have on Facebook and then we post all of our dogs on a posting site called Petfinder and that really does a whole lot of good and that’s how we get more of our out-of-town people. We get people coming from all over Arkansas.”

He said the northeastern part of the United States has more of a shortage of dog because “it’s more in the culture to spay and neuter your dogs and don’t let them run around and breed, but in this part of the country, unfortunately there’s a lot of the culture that thinks that is what you are supposed to do so they don’t spay and neuter their dogs and most of the country does. That is common with Arkansas, Louisiana, Mississippi and Texas.”

What: Still adopting dogs and cats in the midst of COVID-19 through an application process

Marketing: Facebook and Petfinder are two sources that are used to get dogs and cats adopted. rather than making the descriptions of the animals dryly written, the "romance of the write" system is used to bring out the personality of the dogs and cats