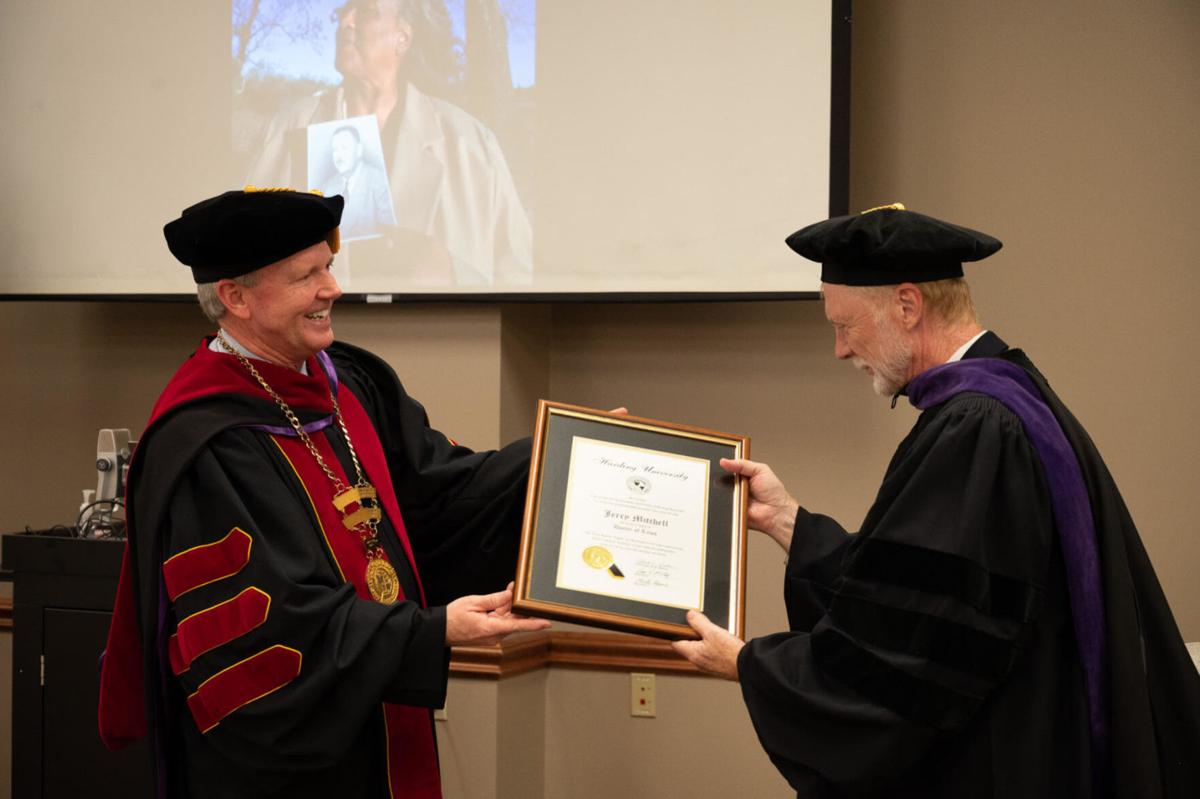 Harding University President Dr. Bruce McLarty (left) awards Jerry Mitchell an honorary doctorate of law for his journalistic work since graduating. Mitchell lectured at the university Tuesday night. He is the author of “Race Against Time,” which highlights his work reopening unsolved murder cases of the civil rights era, including the case of Medgar Evers, a Jackson. Miss, civil rights activist who was shot and killed in his driveway in 1963. 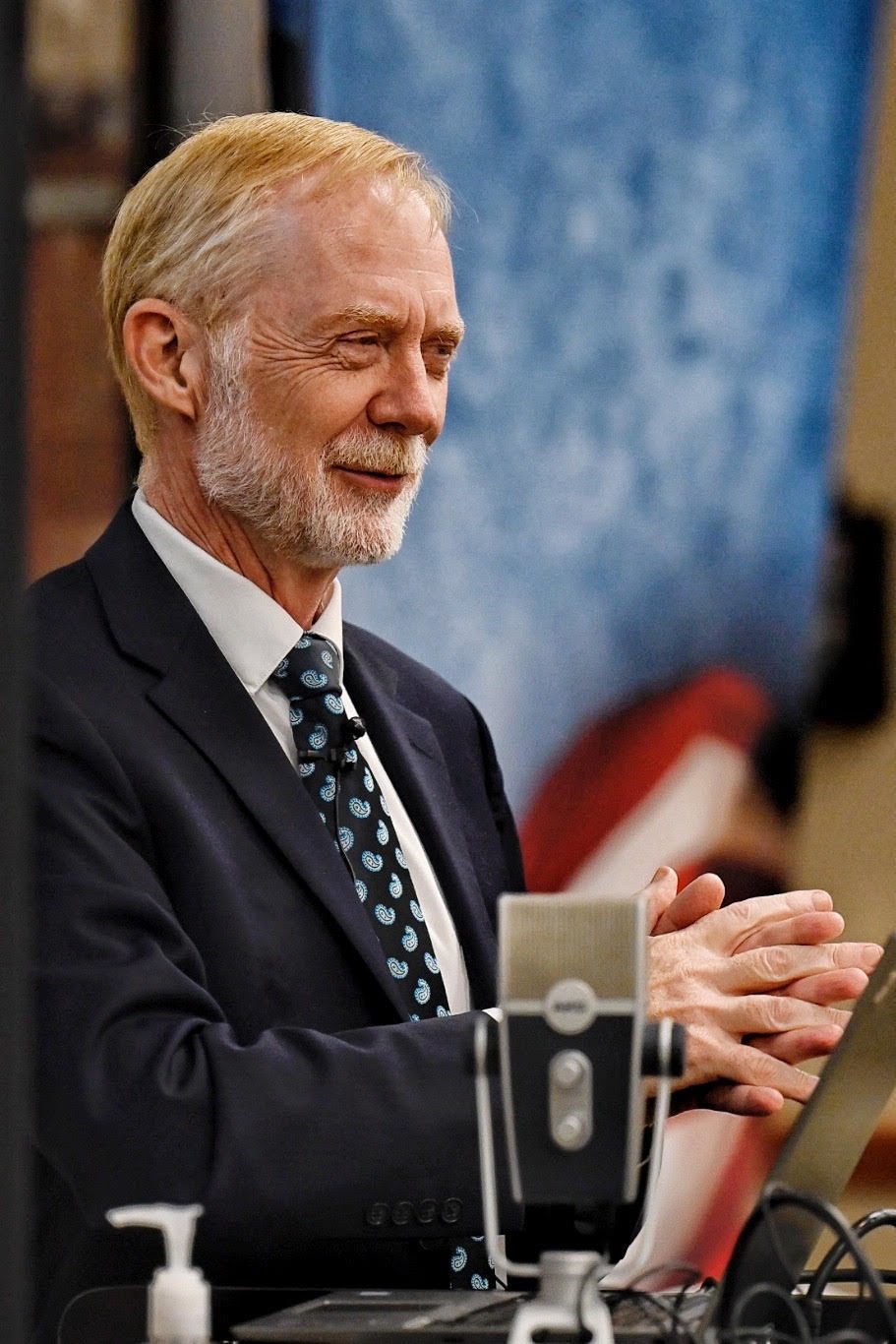 Jerry Mitchell, who wrote for The Bison student newspaper while attending Harding University, returned to campus Tuesday evening to open the university’s lecture series. Mitchell graduated from Harding in 1982 and has authored “Race Against Time,” a book about reopened civil rights-era cold cases. Mitchell spent 30 years as a reporter for the Clarion Ledger in Jackson. Miss. After retiring from his newspaper work, he founded the Mississippi Center for Investigative Reporting.

Harding University President Dr. Bruce McLarty (left) awards Jerry Mitchell an honorary doctorate of law for his journalistic work since graduating. Mitchell lectured at the university Tuesday night. He is the author of “Race Against Time,” which highlights his work reopening unsolved murder cases of the civil rights era, including the case of Medgar Evers, a Jackson. Miss, civil rights activist who was shot and killed in his driveway in 1963.

Jerry Mitchell, who wrote for The Bison student newspaper while attending Harding University, returned to campus Tuesday evening to open the university’s lecture series. Mitchell graduated from Harding in 1982 and has authored “Race Against Time,” a book about reopened civil rights-era cold cases. Mitchell spent 30 years as a reporter for the Clarion Ledger in Jackson. Miss. After retiring from his newspaper work, he founded the Mississippi Center for Investigative Reporting.

“I certainly believe God’s hand has been involved in all these cases because God loves justice,” 1982 Harding University graduate Jerry Mitchell said last week concerning 24 convictions to date in civil rights cases he investigated as a journalist.

Mitchell, who during his time at Harding was a writer for The Bison newspaper and wrote a story about meal prices in the cafeteria going up, came back to campus to speak about his book “Race Against Time” on Tuesday night and wound up leaving with an honorary doctorate of law, presented to him after his lecture by Harding President Dr. Bruce McLarty.

Mitchell was originally scheduled to speak in March but because of the campus being shut down due to COVID-19 concerns, his date was moved to when the lecture series got started up for the new school year. His lecture was a cooperative effort of the L.C. Sears Collegiate Seminar Series, the HU Honors College and the American Studies Institute.

McLarty introduced Mitchell as a investigative reporter who has helped put four Ku Klux Klan klansmen and a serial killer behind bars.

“His stories have also exposed injustices and corruption, prompting investigations, state reforms, firing of boards and officials,” McLarty said. “He is a Pulitzer Prize finalist, a longtime member of the Investigative Reporters and Editors and a winner of more than 30 other national awards, including the $500,000 McArthur Genius Grant.”

Mitchell retired from the Clarion Ledger in Jackson, Miss., in 2019 after 30 years of reporting and founded the Mississippi Center for Investigative Reporting, a nonprofit that exposes injustices and investigates cold cases.

Mitchell’s book tells the story of his pursuit of unsolved murder cases from the civil rights area, leading to convictions in some of the nation’s most notorious murders.

At the beginning of his lecture, Mitchell recalled his work on civil rights activist Medgar Evers’ murder case. Evers lived with his family in Jackson and was shot down in his driveway in 1963. Mitchell said Evers was a World War II veteran who “came home after fighting the Nazis and basically had to fight racism all over again.”

Evers’ daughter, Reena Evers-Everette, also was present at the lecture and was part of the question and answer session after the lecture.

In 1963, Mitchell said, John F. Kennedy delivered his first civil rights speech, saying that “the grandsons of slaves were still not free. On that exact, same night, Medgar Evers was killed, shot in the back in the driveway of his own home and family rushed out and saw the blood and screamed.”

“Did you ever spend time with someone and after you got done you felt like you needed a bath or something? That’s kind of how it felt,” Mitchell said.

He wrote a story and got the Evers case reopened. On Feb. 5, 1994, de la Beckwith was convicted in the murder. “Almost 30 years to the exact day, he was prosecuted in the exact same courtroom,” Mitchell said. “When the word ‘guilty’ rang out, you could hear the waves of joys that cascaded down those hallways until they reached a foyer full of people, black and white, just erupted in cheers, and I was feeling chills because the impossible had suddenly become possible.”

As a field worker for the NAACP, Reena recalled that her dad put 40,000 miles a year on his car traveling. “What he gave us was quality of time. We may not have got a lot of time but the time we got was quality time.”

Reena said the time she spent with her dad was “loving, fun, adventurous. He loved to fish. He loved to scare my mother when we would go out fishing because the water moccasins would come out of the tree and into the boat. I knew that my father was there to protect us. So I was fine. He was a protector always.”

“We watched cartoons every Saturday,” she said. “On Sundays, all the kids would wait until a certain time and if my father was home he would turn it on (‘The Tarzan Show’) and we would go Ah, Ah, Ah. It would signal the neighborhood that it was on and my father would go out and he would do that [Tarzan] cry. It was good. It was great.

“My father was a jokester and a health nut. We had a blender. He would make all kind of health drinks and he would exercise and watch Jack LaLanne [the TV health/exercise instructor].”

Other cases Mitchell focused on were Ku Klux Klan Imperial Wizard Sam Bowers for ordering the fatal fire bombing of NAACP leader Vernon Dahmer in 1966, Bobby Cherry for the 1963 bombing of a Birmingham, Ala., church that killed four girls and Edgar Ray Killen for helping to orchestrate the killings of Congress of Racial Equality social workers Michael Schwerner, James Chaney and Andrew Goodman in Philadelphia, Miss., in 1964.

Mitchell said there is a description on Chaney’s grave that comes to his mind. “There are those who are alive yet will never live, those who are dead yet will live forever.” Mitchell said it dawned on him that each day each person is etching the works of their headstone. “What do you want your headstone to say?”

Mitchell’s interest in civil rights cold cases was sparked by his attendance in January 1989 of a press screening of the movie “Mississippi Burning,” with two FBI agents who investigated the 1964 killings of three civil rights workers. Mitchell then realized the klansmen had never been prosecuted and he became outraged and began his work on civil rights cases.

Giving a voice to the voiceless is something that journalists do, according to Mitchell. “That’s important to tell the truth and let the chips fall where they may.”

Mitchell confirmed during the question and answer session that he is investigating the 2002 death of Don Lewis, the late husband of Carole Baskin from the Netflix show “Tiger King.”