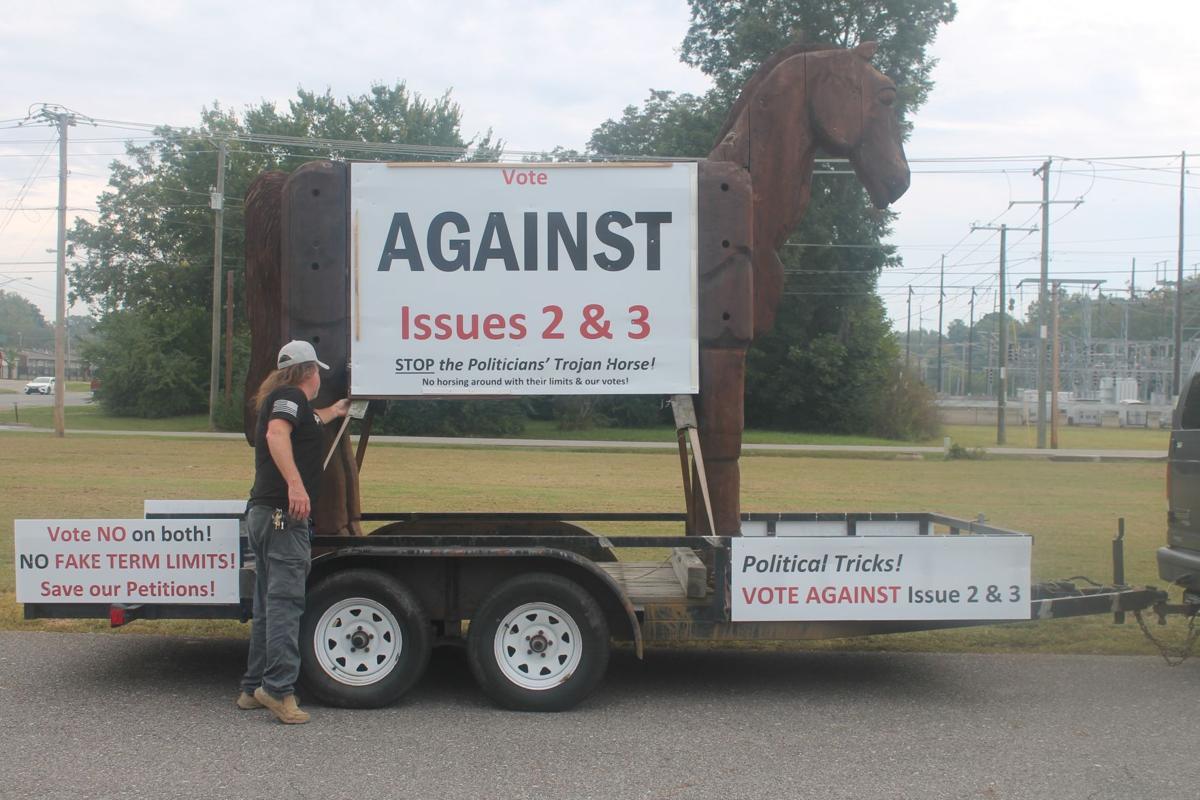 David Lindsay of Jacksonville recently towed a carved horse through Searcy, “trying to make people aware of the Trojan horse that our legislators are putting on the ballot this year. [Issue] 2 is to increase their term limits. It says it’s for term limits, but it’s actually increasing term limits. They can pretty much stay a lifetime. If they go for 12 years, they can take four years off and can come right back and run again or they can do 10 years off and come back again.” 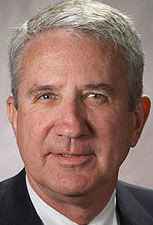 A “diminishing pool of people who are willing and able and in a position to run for the Legislature” is one reason the Arkansas State Chamber of Commerce is in favor of a 12-year term limit measure on the Nov. 3 general election ballot that would allow state legislators to return to office after sitting out four years, according to Randy Zook, president and chief executive officer of the chamber.

“It’s not unusual for people to do that to move up to the senior body, but you also can go beyond 16 years and when you look at the details on how Senate terms are allotted when we have a realignment of districts, you can serve as much as 20 years under the current limitations.”

He said Issue 2 on the ballot would “create a firm limit of 12 consecutive years of service in the Legislature in any combination as is the case now of House terms and Senate terms.”

“You can serve three fours in the Senate or you can serve six twos in the House and at the end of those two years, you would be required to sit out for a minimum of for years, at which point you can become eligible again to run for office and get back in the Legislature, if you’re so inclined,” Zook said.

He said returning to the Legislature after sitting out is “fairly rare” now.

“You can do a little analysis of current servers in the Legislature’s current members. it’s pretty unusual for people to step out by being defeated or just resigning or not running for re-election and then coming back for some subsequent term; that’s a pretty rare occurrence right now,” Zook said.

“So this would give a much more reasonable approach, I think, to saving the experience and knowledge that comes from service in the Legislature rather than throwing people off the list in terms of people who are eligible to run. It would allow for someone to serve a 12-year period, sit out for four years and if they are so inclined, come back and try again if they can get re-elected.”

Zook said the reason the chamber “urged this referral to the ballot” was “because there was the looming possibility of an even more draconian approach, which would have been a 10-year hard limit at the end of which you would be ineligible to serve ever again.”

“You could have someone elected when they were 30 ... whether they were in the middle of a Senate term or not, at the end of 10 years, they are forced out of the office and are never eligible to run for re-election again,” he said. “We think that is a harsh approach to this because like I said in that example, a 30-year-old person could serve 10 years and then be kicked out and ineligible and never be able to serve again at the ripe old age of 40.

“So, one of the issues we are facing in terms of legislative service is a shrinking pool of people ... and it’s just vital that we have top-notch people running and serving in those roles because it’s a big responsibility and it’s far more than a part-time job because of the number of issues and the seriousness of those issues, and it requires as several of your folks who have served so ably over the years, not the least is former Gov. Mike Beebe but also Jonathan Dismang, John Paul Capps, others that serve in that area, Les Eaves now, terrific guys who are doing a great job.”

He said there are “just not a whole lot of those around who are willing to do it because it is such a big demand on time and a challenge to certainly to try to continue to operate a business or serve in some employee role and serve in the Legislature at the same time, so that’s the reasoning behind this.”

He said that’s why “as the state chamber, our policymaking groups have adopted positions supporting” this referral and the other two on the ballot. “Obviously we would do that having been involved in their writing and creation and their passage in the Legislature.”

Zook said that although the 12-year plan is more restrictive, at least initially, than the current term limits, it “was considered by the folks in the Legislature who supported this effort as a reasonable compromise between the harsher limit of 10 years and the current 16-year limit we got where again, once you reach that, you can’t come back and run again. You are off the board for the rest of your life. It was kind of a split the apple there and try to end up with something halfway in between.”

Asked during the session whether Zook feels that legislators would run again after having to take a four-year break, he said he believes some would.

“It will not be common, but I think it’s important when there is that opportunity and when we’ve got people with experience and knowledge and understanding that they have that opportunity throughout their civic life,” Zook said.

Zook said the reason Arkansas has gotten to its current 16-year limit “is kind of baffling.”

“There has been this national group, this Americans for Term Limits, based in Florida. They have just been stirring this pot all over the country and, of course, they are trying to get term limits in the national Congress as well,” Zook said.

Early voting in White County for the general election begins Monday at the Carmichael Community Center, 801 S. Elm St., and White County Cooperative Extension Service Office, 2400 Landing Road. It will run Monday-Friday from 8 a.m.-6 p.m. and Saturday from 10 a.m.-5 p.m. until Nov. 2, when it ends at 5 p.m.

What: Supporting Issue 1, which establishes new 12-year term limits for state legislators that would allow re-election after sitting out four years

Why: Legislators currently not eligible to run again after serving 16 years total, "diminishing pool," with possibility of "hard limit" being changed to 10 years