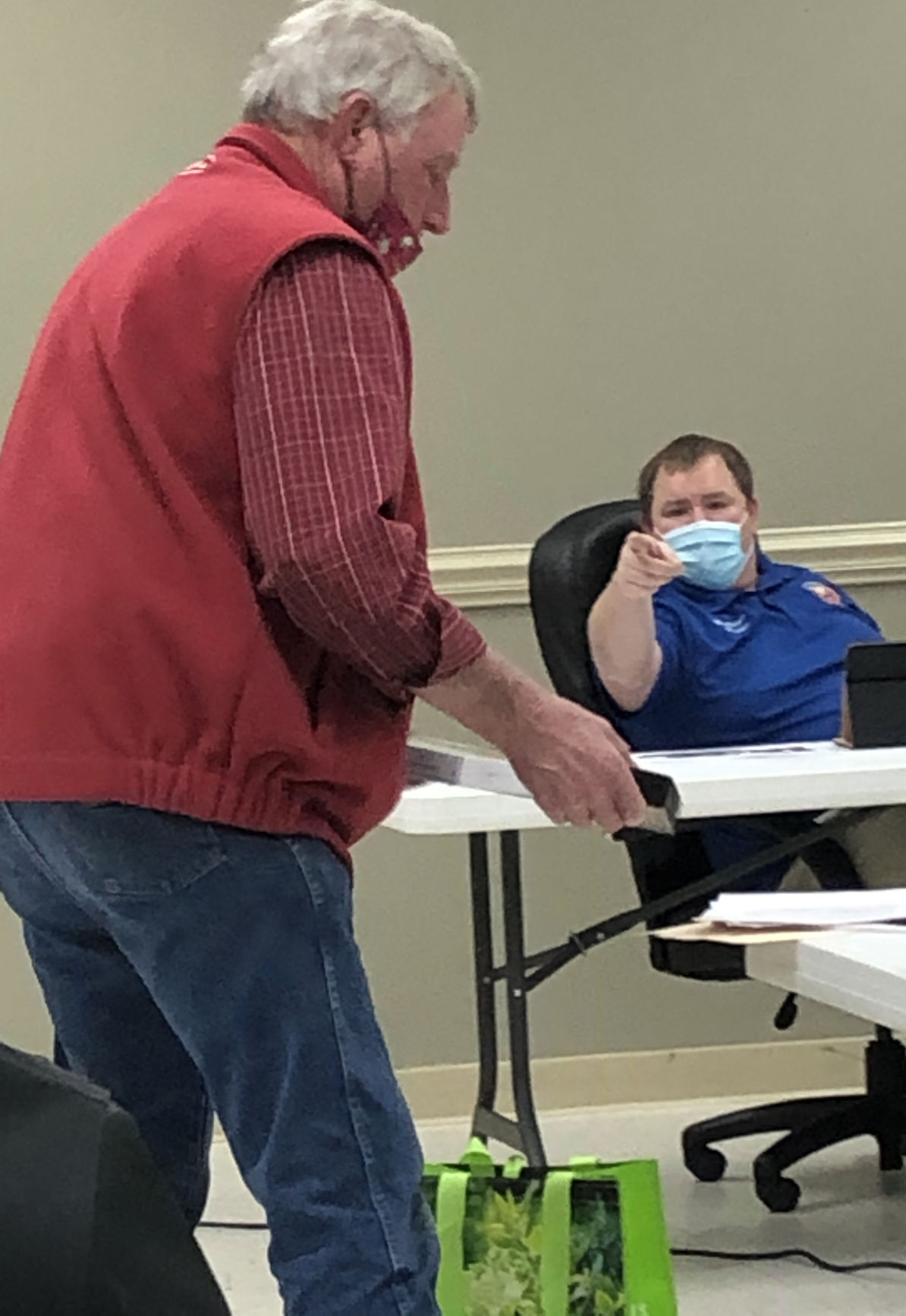 Beebe Councilman Matt Dugger points at retail space landlord Bill Junior during an exchange at the Beebe City Council meeting Monday night. Junior said he was there on behalf of the operator of Vapor Maven who rents property from him at 1910 E. DeWitt Henry Drive. He said he thinks the current drug paraphernalia ordinance is vague and parts of it needed to be changed. The council voted to keep the ordinance in place, blocking stores from selling “prohibited substances.” 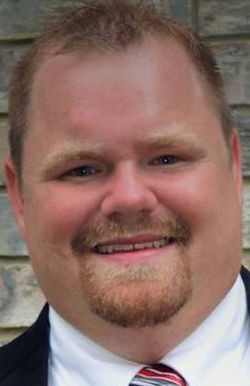 Mayor Mike Robertson and the Beebe City Council did not back down when confronted Monday about an ordinance that prohibits businesses in the city from selling items considered to be drug paraphernalia, with Councilman Matthew Dugger saying changing it would be like “saying we allow drugs in our city.”

Bill Junior, who owns retail rental property, including an area housing a vaping store, Vapor Maven, spoke on his reservations about Ordinance 2010-4 after Robertson announced last month that the city would be cracking down on the sale of “prohibited substances” by businesses.

Junior said since 2010, when the ordinance was written, vaping has been legalized, as well as some forms of cannabis and CBD oil, and he said stores in the city have been selling them. But now, “they are being restricted in what they are selling.”

He said he went to Walmart and bought a pack of cigarettes, a pack of LED digital scales and grinders. “In a tobacco store, you have to be 21 to get into the store to buy this. At Walmart, they can buy at 8, 9 years old, [but] they cannot buy cigarettes.”

Junior, who said he had his Walmart receipt, held up the items for the mayor and City Council to see. “Walmart sells pocket scares, the tobacco store sells pocket scale.”

“Second of all, all this can be ordered online and mailed right to your house,” he said. “They are all still selling them. They are also selling fertilizer, potting soil. Your law is very vague. You are penalizing certain people only.”

Also on Junior’s list of things he said can be bought at stores were injection needles and syringes. “Syringes? You don’t need a prescription. You can go to the drug store and buy syringes. They [tobacco and vape stores] are not selling syringes, but you got it in the ordinance and you all are going against the vape stores and the tobacco stores on this law.”

Dugger responded assertively, “I don’t care if you have to be 21 or nothing, that’s saying we allow drugs in our city and I’m against it.”

He told Junior that one of the scales that he held up for the council to see had food on it. Dugger also asked about a grinder that Junior said he bought at Walmart, which appeared to be a pepper grinder. “A grinder is a grinder,” Junior answered.

“You are showing us a scale that has food on it that I use at my house for weighing food,” Dugger said. “What are they going to weigh after they buy those scales, tobacco?”

“That’s up to the customer,” Junior replied.

Concerning the pocket scales that Junior showed, Dugger said “those are for drugs. They are illegal in our city right now. I’m not voting to change that.”

Junior responded, “You need to change your ordinances.”

Dugger said, “I want to make a motion right now that we keep our ordinance that we have.” Councilwoman Linda Anthony seconded the motion, and it was passed unanimously by the council.

Dugger said in one store there is a cartoon of a man laughing with a big circle that says, “Just for tobacco use.”

Beebe Police Capt. Barron Dickson recalled a store that had crack pipes in it, “pipes for meth only.” Dickson said “they were also selling synthetic urine, which is illegal.”

Junior said some of the ordinances “should be loosened up a little bit.”

Junior said his question was, “why can they sell grinders at Walmart? Walmart has them listed as herb tobacco [grinders].”

Robertson told Junior that the 2010 ordinance “is not outdated.” He said growing cities were looking at problems they would be facing.

“We looked ahead and we passed an ordinance to prohibit drug paraphernalia,” Robertson said. “The most prevalent use of an item should be defined as what it is and when you walk into tobacco stores and you walk into Vapor Maven – and you are renting Bill [Junior], you are just renting retail spaces, and that is what you want to continue to do so you can collect your retail money and it is not about what is best for our community, it’s not about what is best for our kids.

“There is nothing in this world that we love more than our children and we want to safeguard our children as much as possible, and vaping is not one of them. I don’t care what kind of vaping it is. We can come back down there and you can take the vape and all these little vapor things and you can vape marijuana in them. You can vape it in oil form or you can take that grinder you got and if you grind it fine enough then you can vape it in the little vape mechanisms, whether it’s one that is made like a USB port, or if it is one made like a hoodie or if it is one made on a backpack, you can do all that. And everywhere where it would be sold in the city of Beebe it would be illegal.

Robertson said recalled that the council passed an ordinance in 2008 for sex-oriented stores although “we don’t have any of them.”

“Kids can go online and buy these things. All they got to do is click 21 and they can buy it, but it is not being sold in the city limits. They cannot go out there and take it to school and during their breaks go into the bathroom and vape and them sell them [the vaping devices] for 25 dollars a piece all across the school.”

He called it “a gateway to a next drug.”

“I don’t care what you do with it. If you say you’re doing vaping it is all the different types of vaping mechanisms that they have and you can use CBD oil, you can use tobacco, you can use the vape oils, you can use whatever you want and a lot of those aren’t even CBD,” Robertson said. “It has lead, it has aluminum, it has all those things that are in it.”

Junior said he understood, but again stressed that “you have to be 21 to buy it.”

Anthony addressed having to be 21 by mentioning her grandchild having birth defects and having to stay “in the hospital all the time.”

“My grandbaby suffers for the very reason you are saying and the age does not matter. I am telling you my grandbaby’s momma was over 21” when she bought vaping products, Anthony said. “My grandbaby suffered, so no, I’m not going to vote for it either.”

He asked Dickson how many drug overdose calls the department has had in the past week. The answer was at least four, and three were in one night. “That is in one week’s time,” Dugger said.

Councilman Derrek Goff said as an educator, he actually arrested one of his former students.

“The seniors and their older brothers are going into these shops and buying the stuff and they’re selling it to these high school kids at cheaper prices or they are going in with fake IDs or whatever,” Goff said. “We can’t help that. We can’t assist them in getting this and going against this ordinance, just saying there is money to be made. That’s not cool and I’m not OK with that and I’m not going to back off on an ordinance. We are trying to save our kids and our community because we are losing them.”

Junior said, “OK. I told my renters I was going to come up here and discuss it with you. I respect y’all’s feelings on it.”

What: Votes to keep ordinance in place prohibiting businesses from selling items considered to be drug paraphernalia