If you need to purchase a subscription.
You are the owner of this article.
Edit Article Add New Article
You have permission to edit this article.
Edit
Home
News
Sports
Business
Community
Announcements
Obituaries
Opinion
Multimedia
Classifieds
Share This
1 of 6 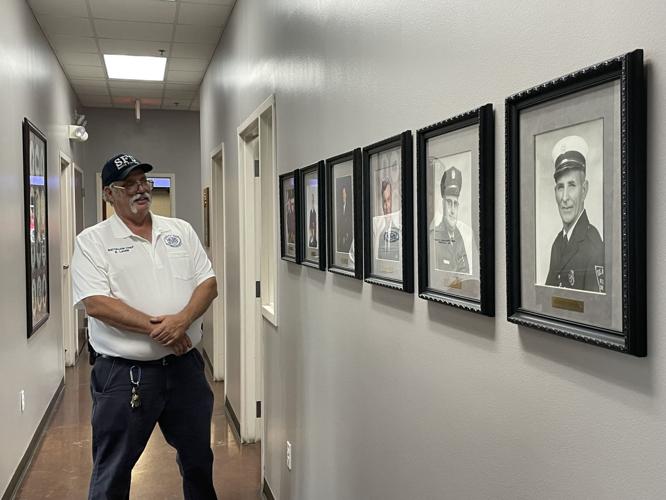 Searcy Fire Department Battalion Chief Ryland Lauen looks at pictures of the past fire chiefs displayed on the wall outside of his office at the Central Fire Station. He said at his retirement party Friday that he worked for five of them. 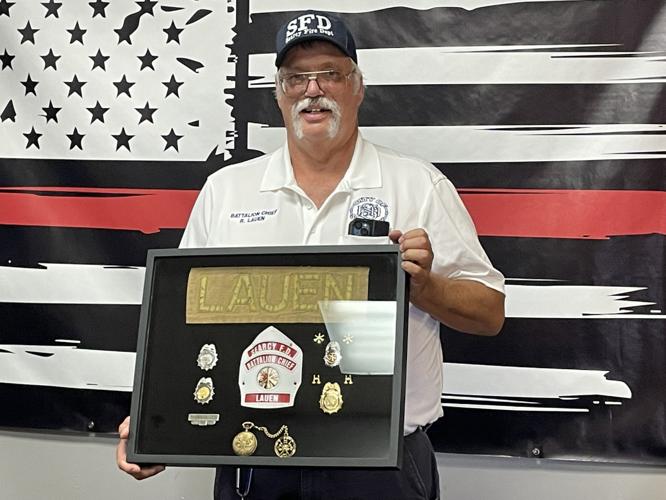 Battalion Chief Ryland Lauen was honored with a retirement party Friday at the Central Fire Station. Lauen retired after “33 years and month” with the Searcy Fire Department. 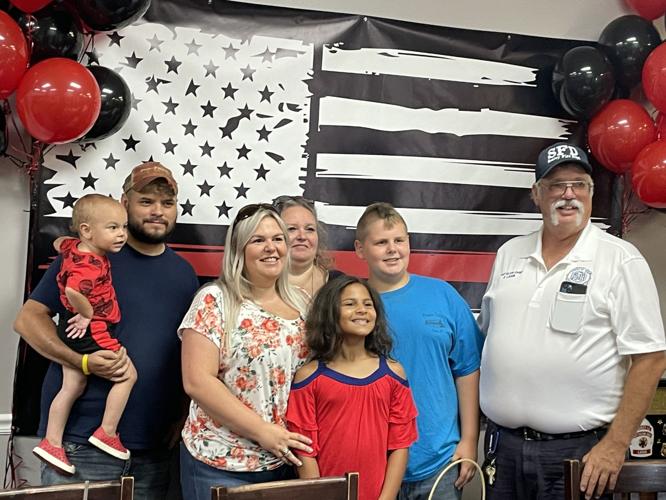 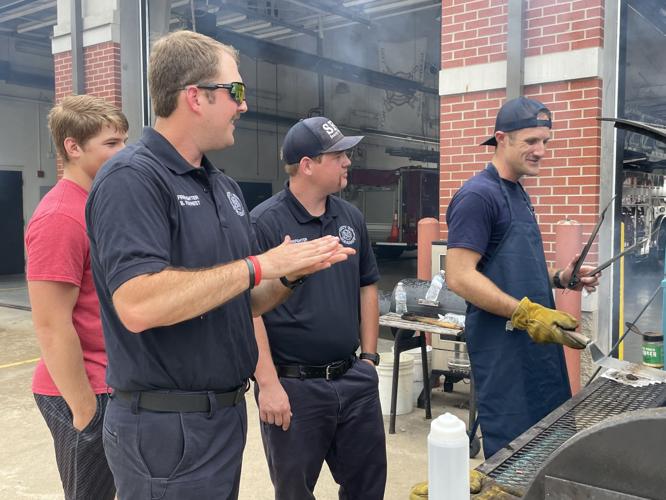 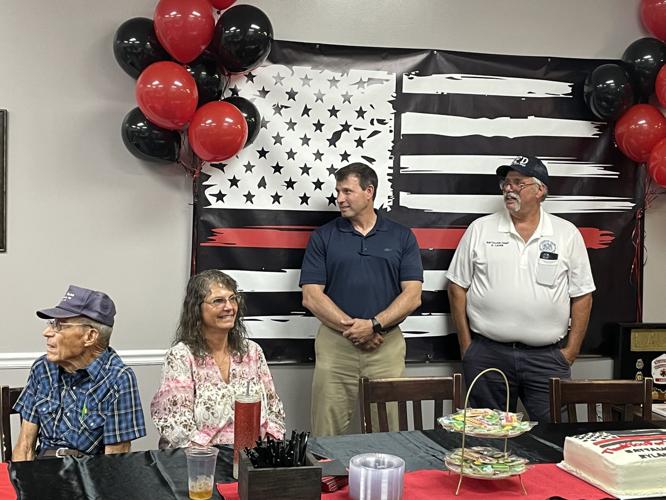 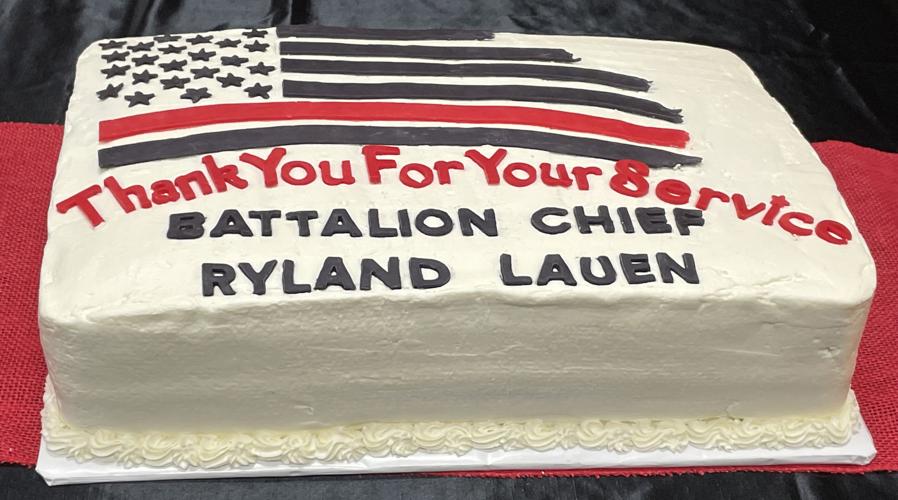 Searcy Fire Department Battalion Chief Ryland Lauen looks at pictures of the past fire chiefs displayed on the wall outside of his office at the Central Fire Station. He said at his retirement party Friday that he worked for five of them.

Battalion Chief Ryland Lauen was honored with a retirement party Friday at the Central Fire Station. Lauen retired after “33 years and month” with the Searcy Fire Department.

Coming out of his office at the Central Fire Station on Friday afternoon while his retirement party was still going on in another room, Battalion Chief Ryland Lauen took a walk down the hallway, stopping to look at pictures on the wall of the past Searcy fire chiefs.

“J.W. ‘Red’ Morris hired me on July 5th of 1989,” Lauen said on his last day with the department. “Dave Webb took over in June of 2000 – Red retired and Dave took over. Chief [Bill] Baldridge came to us, I believe, in September of 1995. When Chief Baldridge retired, Chief [Andy] Woody came and he stayed, I believe, two years. Now, [the department has] Chief [Brian] Dunavan. I never thought I would work for five fire chiefs, but I made it.”

Lauen spent “33 years and a month” with the department. He was one of three 1983 graduates from Searcy High School to work for the department. “The other guys were Roger Phillips and Tracy Coleman. They all retired before me.

“They got hired about 1985 or 1986 and it took me until 1989 to get on. I started taking the civil service [exam] the same time they did,” he said. “They got hired and then there weren’t any openings for three years and I got the opening.”

Lauen said he would tell any young person that the fire service “is a very exciting career. I would love for people to be able to understand that this is a career more so than a job. You find jobs other places. When you come here,if you’re here for the right reasons, it becomes a career.”

“I’m going to tell you it was very tough on me for the last week,” he said. “Most people can’t wait to get to retirement. My goodness, it’s been tough because I have done this for half my life. I have drove trucks. Obviously farmed [with his dad who owns a 430-acre farm in attendance]. I moved household furniture for Atlas Van Lines. I worked at Polar Stainless when it was here. I had several jobs. I didn’t know really what I wanted to be when I was a kid.

“I wish that [firefighting] had been a childhood goal but it never crossed my mind. When it started crossing my mind is when my buddies got hired up here.”

When Lauen started in 1989, his annual salary was $12,000. “It wasn’t a matter of whether you wanted to work on your days off, it’s how much can you work and how much can you make. Salaries have come a long ways, but there’s still a lot of room for improvement. I know the city is working on it now and I look forward to it for these guys.”

“I have enjoyed my career here. I have enjoyed every day of work,” Lauen said. “There are times that people make the job not an enjoyable situation. As I told my wife this morning as I was getting around, I said, ‘I’ve never hated going to work.’ When I worked at the factory, I just as soon somebody beat me as make me go to work and when I was moving furniture ...”

He said the city has had “a lot of big fires” during his career.

“Probably one of the ones that sticks out the most – and this is fairly late on in my career – when the Yarnells’ house burned out in Country Club” in 2005, he said. “Mr. Albert Yarnell was out of town on a pheasant hunt and his wife was home and it was a Sunday evening and she was getting ready to go to church and her doorbell started ringing and there was nobody at the door.

He said the biggest fire he remembers is “the American Heritage [Building] over at Harding [University] when it burnt [in 2002]. My crew was on duty but I was getting new carpet laid in my house. [The fire] started in the second story. It was in November of that year and we were at pace to have the lowest fire loss we have in the Searcy Fire Department for years, and that one night hit us for over a million dollars.”

He said it was thought the fire was started by a sterno fuel can that was left lit because of a banquet that was being held. “Almost a year later, a lady that worked over there’s son got busted for some other charge and he confessed to having gone up there and set one of those sterno cans on fire right there where [fire investigator] Keith [Carlisle] said the fire was at.” Lauen noted the “massive remodel that has been done on the American Heritage Building following the fire.”

That wasn’t the only Harding experience that stood out to Lauen. “For years when I first hired on, there was not a good relationship with Harding University and the fire department. They were very private. They didn’t really want anyone snooping around over there as such. They would have room and contents fires over there and we would never know anything about them. Well, over the years reparations were made and we work so well with them now.

“One of the things that came to light, they were overcrowding the Benson [Auditorium] on the Saturday final feature of Spring Sing every year because they would run all the clubs through and do their skit and all throughout the week they would go outside. Well, after their skit, they would all allow them to come in and sit in the aisles. Well, they were putting an extra 1,000 to 1,500 people in and you’re not supposed to, so Phil Watkins, who had taught there for a period of time, kind of became our liaison and he worked it out to whenever they got ready to do that on Saturday night, he would sign off and allow them as long as fire trucks were on site. So that became a normal thing.”

Lauen said he “loved” the community relations part of his job.

“Chief Lauen is a great man,” Searcy firefighter John Gernenz said. “Gave me a chance and hired me. I wouldn’t be the firefighter I am without the things that he has taught me.”

Lauen, in turn, thanked Baldridge for “what you taught me – how to be a good fireman, how to lead people. You gave me way more than I ever gave you.”

Baldridge said he doubted that, but “I appreciate you saying so.”

Lauen said that everyone he’s worked with “has brought something to me. I hope I leave everybody with just a little bit of what you all brought me and if so, I feel like I was successful.”

Battalion Chief Andrew Bogan said he worked for Lauen for years. “I came to work on C shift, his shift, and he was the guy that I had a good understanding with – as long as I took care of business and everything I needed to take care of, then he would take care of me, and he has.”

Searcy firefighter John Falwell is also on C shift and said with Lauen, “there is so much knowledge there and we’re losing that.”

“It didn’t matter, any truck out here, any piece of equipment, you could ask him about it, he could tell you about it – when to fix it, where we got it, who to call. He knows about everything in town,” Falwell said. “I have tried to soak up everything I could from him and he has put me in touch with so many contacts, working on these trucks, like who to call.”

Dunavan said Lauen had been “a very big asset to the department with the knowledge he has had through the years, especially with the apparatus, engines and stuff. He knows everything about them. He has just been a real leader to the guys and we appreciate him being here and his years of service.”

Falwell mentioned “Lauenisms” because Lauen “has got all these quirky sayings. He is just a joy to be around and you couldn’t ask for a better boss. He worked with you. He knows life happens and if you’ve got to go home and take care of something, he would say take care of it. He was a ‘you help me, I help you’ guy.

“If you didn’t mess up, you were good but when you messed up, he told you and that was the end of it. He didn’t dwell on it. He didn’t hold it over your head. He was a phenomenal guy to work for. It has been a good run with him.”

Now, Lauen plans to play “with a few old hot rods” with some other friends who have recently retied.” He said he also is “building a house right now” and has been on the White County Fair Board for nine years.

He and his wife, Cynthia, also have three grandchildren to spend time with. “My daughter Melissa was a year old when I came to work here,” he said.