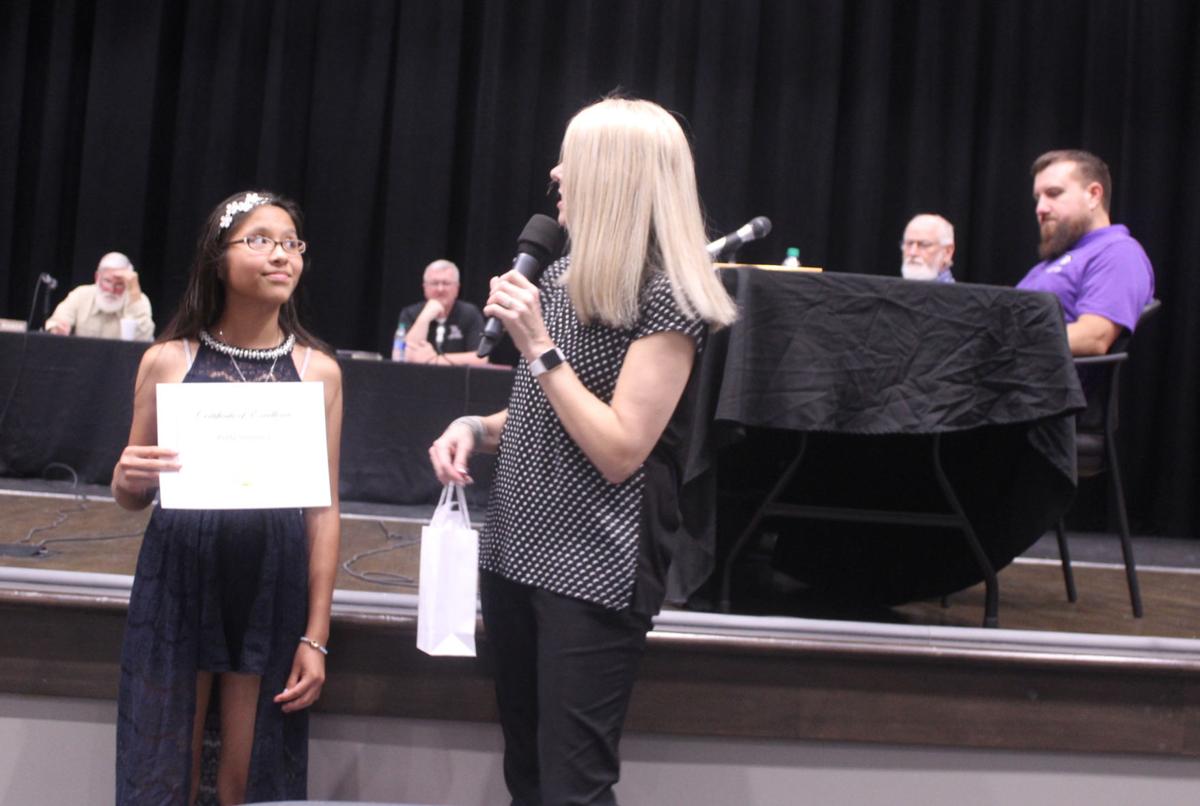 Perla Martinez (left), a gifted and talented student in the Riverview School District, receives recognition for her performance in the Region 4 stock market game from her teacher / coordinator Kerry Daughety on Thursday. 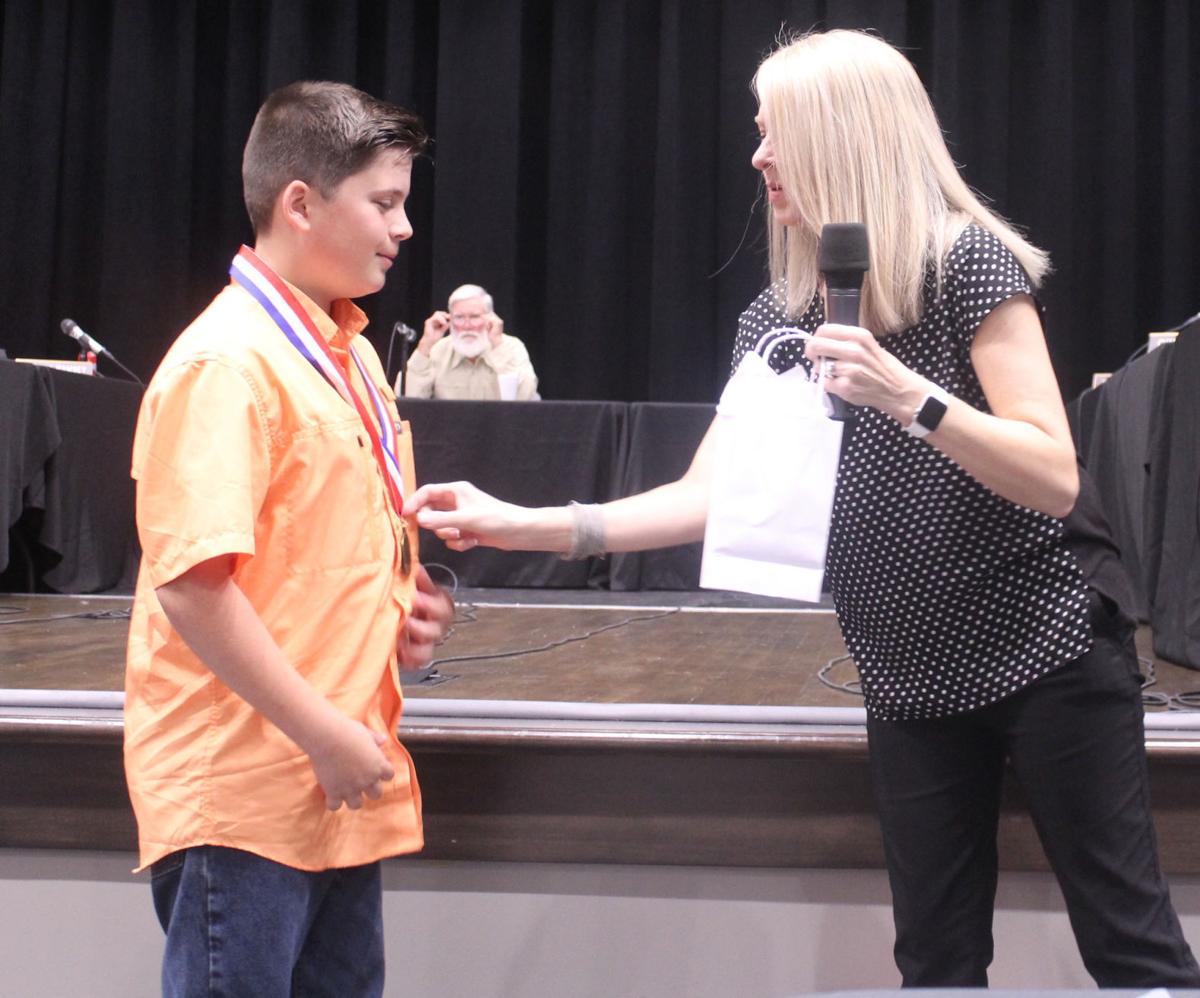 Caleb Johnson, a gifted and talented student, receives a medal for his first-place win in the Region 4 stock market game. He also received a first-place banner and $125 check from Economics Arkansas and stock market and achievement certificates. 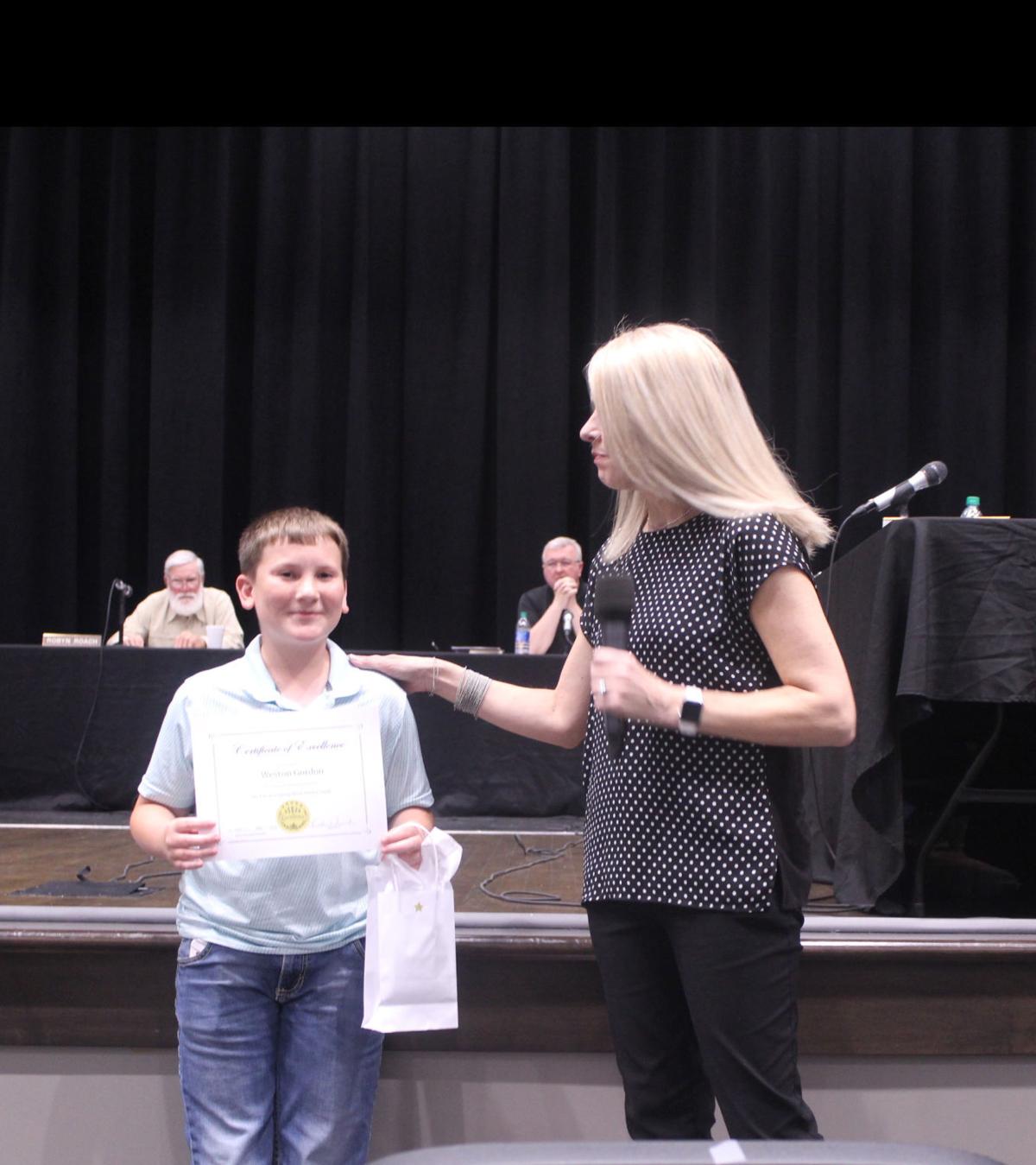 Weston Gordon, a gifted and talented student in the Riverview School District, placed 11th. Students were given $100,000 in fake money to play the game over a three-month period.

Perla Martinez (left), a gifted and talented student in the Riverview School District, receives recognition for her performance in the Region 4 stock market game from her teacher / coordinator Kerry Daughety on Thursday.

Caleb Johnson, a gifted and talented student, receives a medal for his first-place win in the Region 4 stock market game. He also received a first-place banner and $125 check from Economics Arkansas and stock market and achievement certificates.

Weston Gordon, a gifted and talented student in the Riverview School District, placed 11th. Students were given $100,000 in fake money to play the game over a three-month period.

Riverview School District Superintendent Stan Stratton and the School Board recognized gifted and talented students last week for their performance in the stock market game.

Gifted and Talented Coordinator Kerry Daughety said she works with third- to sixth-grade students at Judsonia Elementary and Kensett Elementary schools and gives them challenges each year with this game that is funded by Economics Arkansas, an educational nonprofit organization.

“This year, we were able to give each child their own account,” she said. “This year, it was virtual and they could play from home.”

Daughety said she decided to let the six-graders play in the fall and they would in turn teach the fifth-graders how to play. Each year the students learn more and more, she said.

“They have to research the real stock market and some of these kids go home and they have it on a device. They are looking at the constant stock market,” Daughety said. “It is a really cool experience and we know how world events change. We know that upcoming sports events or holidays and all those things can affect the stock market. The election, COVID, you name it.

“These kids really get into it and they are given $100,000 [in fake money] to start with in their account ... . They learn to diversify their portfolios. They choose. I don’t tell them you can’t do this or you have to do this.

“Sometimes I say, ‘Invest in an Arkansas company,‘ because there are some we found, like Dillards headquarters are in Arkansas. Tyson Food company and JB Hunt Trucking [are also Arkansas-based companies] that are known nationally. They start picking a few stocks with a few shares a little at a time and they have to watch the ebb and flow of it.”

She said she chose to honor the top 20 students at the board meeting, but she has just been impressed with all of her students and their performance in the stock market game.

“I have never been on the top 100 coordinators in the state of Arkansas because I never had enough teams,” Daughety said. “This year, I am in the top 100 because these guys. My name is on there because these guys did what they did. There are like several hundred teams. I was No. 11 so I want to give them a hand for putting me there.”

Riverview is part of Region 4 in the stock market game. “We had 139 teams,” Daughety said.

Weston Gordon was No. 2 in the fall semester as a sixth-grader, and placed eleventh this semester, according to Daughety. “He did like double gold; he just blew me away.”

Gordon, a 12-year-old student at Judsonia Elementary, said he wanted people to know more about “buying low and selling high” when it comes to the stock market game. He said he looked at Pfizer because back during the time “they were really low and I also knew they were creating a COVID-19 vaccine.” He said by investing in Pfizer at the beginning he made more than $200 with that one stock and then continued to invest.

Daughety said Caleb Johnson, a fifth-grader at Judsonia Elementary, was in first place in the game within three weeks and “didn’t move. He stayed in first place the entire time [this spring].”

Johnson said when he first heard they had the chance to enter the stock market game, he was “very intrigued for himself and his classmates.”

“I paid very close attention to my classmates, especially Weston Gordon over here who ended up getting second place in the fall game,” he said.

Johnson was honored as the first-place winner with a medal from Economics Arkansas, a check for $125 and a banner that said 1st place.

School Board member Darren Gordon asked Johnson about the Game Stop stock and if he saw that it was rising or if he was just a big gamer. “Actually both, to be honest with you,” Johnson said. “I do like gaming a lot, but just looking at Yahoo Finance, I noticed Game Stop shot straight up, almost to its max, and I was just baffled at how high it went. When I sold, I had 300 shares in it, so I just sold immediately and that’s basically how I got first place.”

Daughety also acknowledged Brayden Trosper, who placed fifth; Perla Martinez, who took 15th place, and Connor McCown, who took 16th place. She gave the students a certificate of excellence signed by their principals and also a stock market certificate.